Armstrong bounces back with Grampian Win 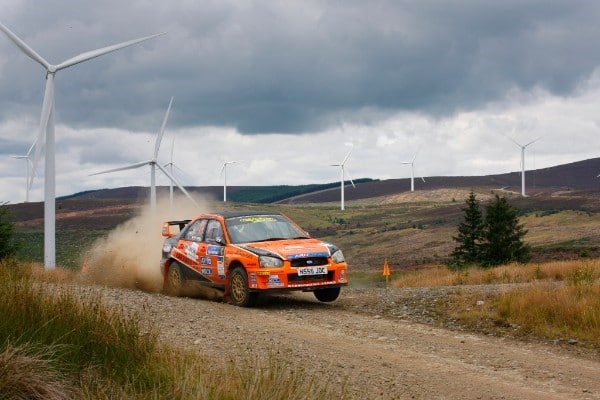 The Grampian Forest Rally, the penultimate round of the season, took in six fast and flowing stages in the forests around Banchory and would also offer the outside chance of the 2018 SRC champion being crowned in Aberdeenshire.

Armstrong was keen for a good result in the Kincardineshire forests having crashed out just a few metres into the previous event and duly set the pace on the opening two stages.

The Castle Douglas driver quickly opened up a 19 second lead over Pearson’s Ford Fiesta R5, before that eroded slightly as Milne upped the pace in his Impreza S14 WRC in the following two tests.

Undeterred and never truly under too much pressure, Armstrong responded with a quickest time on stage five before a steady run in the final test saw him clinch his first victory since last September’s Galloway Hills Rally.

Pearson was slower than Armstrong in five of the six stages, but still managed to stay in touch despite his lack of seat time this year. The Duns driver was happy to return with a second place finish but knows he can achieve more when he gets back into the groove with the R5.

Milne had been holding second in the SRC for much of the day having, but a moment in the final test meant he eventually finished three seconds behind Pearson. Third gave him his second podium of the year but denied him a second place finish that would’ve been his best ever result.

Behind the top three, title protagonists Andrew Gallacher and Donnie MacDonald were continuing their tussle to become Scottish Rally Champion.

Having completed the opening test three seconds slower than his rival, Gallacher turned up the wick to hold fourth position throughout the day as MacDonald slipped back with a puncture aboard his Ford Fiesta R5+.

The Ford Focus WRC driver fended off a late challenge from MacDonald and Mitsubishi Evo IX driver Bruce McCombie to extend his championship lead to three points ahead of the final round. Gallacher’s co-driver Jane Nicol did however do enough to seal the 2018 Co-driver’s title with MacDonald’s co-driver Jamie Edwards not registered for points.

McCombie and Michael Coutts kept themselves in mathematical championship contention with fifth ahead of a disappointed MacDonald who admitted to being nervous ahead of the event.

Michael Binnie and Claire Mole put in another fine performance to take seventh in their Mitsubishi Evo IX, just four seconds ahead of John Wink and John Forrest’s Hyundai i20 R5.

Mark McCulloch was trying out an ex-Iain Wilson Subaru Impreza on gravel for the first time having previously driven a Fiesta R5 and finished ninth, four seconds back from Wink and eight from Binnie. Reay MacKay completed the top 10 in his Ford Focus WRC.

Having won each of the last four rounds, Greg McKnight was on course for a fifth consecutive Scottish 2WD win, only for his clutch to let go on the final stage. That promoted Gordon Murray to first place in his Ford Escort Mk2, just 10 seconds ahead of Willie Stuart’s smaller-engined Mk1 version. The returning Duncan MacDonald took third.

John Wink topped the SRC Challengers in his i20 ahead of Lawrence Whyte who lost time with an off-road excursion on stage four in his Fiesta R5. Keith Morris took third in the category in his Mitsubishi Evo VI.

Ally Currie salvaged the Junior win in his Ford Fiesta ST by just three seconds, struggling through the final couple of stages stuck in third gear. Grant MacRae ended up just three seconds back with Johnnie MacKay rounding out the all-Fiesta podium with third.

One round now remains in the ARR Craib MSA Scottish Rally Championship. Jane Nicol may have provisionally sewn up the co-driver’s title, but the 2018 driver’s champion is all set to be crowned on the Galloway Hills Rally in Castle Douglas on Saturday 8th September.