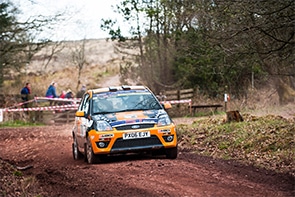 Having taken the runner up spot in the ultra-competitive Fiesta ST Trophy this season, Bilham will return to the driver’s seat for the final time this year, heading back into the Yorkshire forests to fight for the prestigious title. The Reis Motorsport Insurance supported ace will start the event in the lead of the English Championship, but a slender three point advantage over his nearest rival means the title will most certainly be a close fought affair.

The event takes place within the Dalby Forest complex, the scene of Bilham’s inaugural Fiesta ST Trophy victory just a few weeks previously on the Trackrod Rally. With co-driver James Whitaker returning to the passenger seat, the duo are confident of a bagging a decent result in their Fiesta ST.

“Taking my first series win this season at the Trackrod was a fantastic experience, especially as it’s my home event” says Bilham.

“Whilst it didn’t net me the Fiesta Trophy title, it enabled me to climb to the top of the MSA English Rally Championship leader board. Thanks to my one hundred per cent finishing record this year, the points have been mounting up and I am now in a really strong positon to clinch the title which would be a fantastic achievement”.

The 19 year old Bingley resident is aware however, that there are around five drivers that could potentially take the honours at the weekend.

“It’s a really close at the top the standings and I need to have a clean run to be in with a chance of taking the points needed to bag the title. I’m pleased with the way my speed has increased this year as I continue to learn left hand drive and the Fiesta which was new at the beginning of the season. It’s now time to put all that experience into practise; I don’t want to be runner up again in 2016.”

The MEM Malton Forest Rally offers around 40 miles of competitive action across six stages in the Staindale and Langdale forests within in the Dalby complex.