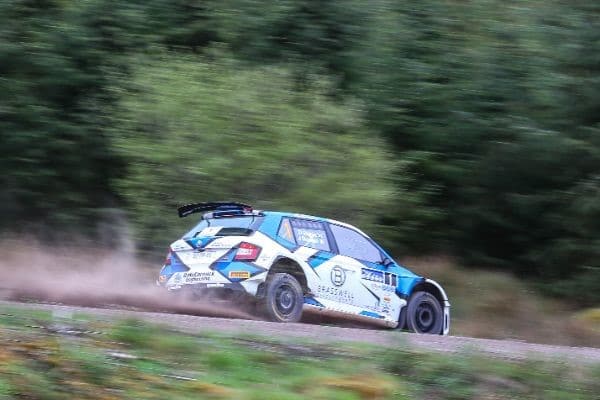 Bogie’s win put him level with Roger Clark with six event wins, and brought Thorburn’s sensational run of six rally victories from as many starts to an end.

Held in the legendary Eskdalemuir forests, the third round of the SRC took the crews to Dumfries & Galloway for some of the UK’s most iconic stages including Twiglees, Castle O’er and Ae.

Bogie, back out in the SRC after retiring from the Speyside last month, led early on but Thorburn and Pearson were latched onto the back of him. Pearson and co-driver Dale Bowen had to push their Ford Fiesta R5 hard to catch the Focus WRC of Thorburn who was trailing Bogie by just six seconds after two speed tests.

Pearson broke Bogie’s duck and won Windy Hill as Thorburn trimmed Bogie’s advantage, but Thorburn’s work would be undone with a stall at a hairpin losing him seven seconds and his second place. 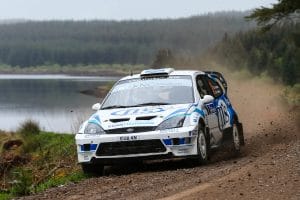 Bogie’s lead was up to eight seconds from Pearson at second service, but the Pearson would suffer a disappointing run through the penultimate stage, losing 12 seconds to a flying Thorburn.

Thorburn netted the stage win by five seconds to almost half Bogie’s cushion up front, but the local star  wouldn’t be denied glory as he set an identical time through the final Castle O’er test to edge out Thorburn.

“It’s a great achievement, but I’m under no illusions that it’s a far shorter event than it was when Roger Clark got all those wins all those years ago,” said Bogie of his record-equalling victory.

“But nevertheless it’s my local rally, the one I wanted to win so it’s an achievement I’m very proud of.

“The stages were a real mixed bag from wet, dry and slippy and of course the added challenge of loose rocks as well but we’re very happy, it’s always good to spray the champagne in front of family and friends.”

“We obviously dropped that time at the hairpin in Ae which was my fault, without that it probably would’ve been a different story. It is annoying [to lose 100% record] but we’ve won six on the bounce so we can’t complain.

“When everything is working fine we go well and we are competitive so I’m looking forward to the next one.”

Pearson wound up third in the end but only 20 seconds shy of the victory, showing a great up-turn in pace against such stiff competition,

“We were happy up until stage four when we fell away a little bit, but these guys seemed to have an extra gear when it got slippy this afternoon,” reflected Pearson.

“We just didn’t quite have the pace, but given what the guys have done this year and the experience they have in four-wheel-drive over the years we’ve got to be happy.

“The championship is still all to play for. We’ve got some good solid results. Undoubtedly Euan has three stronger scores than us, but we’ve got a lack of seat time so we need to try and come on stronger in the second half of the season.

“We don’t have the budget for more seat time so if we can improve ourselves physically, work on our notes and things like that, that’s where we’ll get the final few seconds.”

Jock Armstrong and Cameron Fair finished a lonely fourth aboard their Subaru Impreza, with a front-right puncture on stage five not helping their pursuit of the battle for the podium.

The pair finished over a minute behind Pearson and Bowen, but equally had a minute in hand over the Ford Focus WRC of Bruce McCombie and Michael Coutts.

John Wink and new co-driver Neil Shanks netted sixth in their Hyundai i20 R5 after a trying start, with Wink bedding himself into a new voice in his ears. The duo held just a three second advantage over a recovering Donnie Macdonald and Andrew Falconer, who confessed they weren’t at their best in their Ford Fiesta R5.

Snapping at the heels of Macdonald and Falconer were Scott MacBeth and Daniel Forsyth in their Mitsubishi Evo IX. The pair had started brightly, holding sixth overall in the morning before dropping back slightly in the afternoon.

Michael Binnie and Claire Mole salvaged ninth in their Evo IX after snapping a brake calliper and thus completing stage four with no brakes. Binnie was forced to complete the final two stages of the event with just three of the brakes working.

Keith Morris and Terry Mallin rounded out the top 10 after another impressive and solid run in their Mitsubishi Evo VI.

MacBeth and Forsyth bagged top honours in the Albyn Garage SRC Challengers series as well as eighth overall. Morris and Mallin took second ahead of the Subaru Impreza of Ian Baumgart and Sinclair Young.

The Scottish 2WD Championship crowned its third winner from as many rounds as Iain Wilson and Chris Williams stole the show in their Ford Escort Mk2. The pair beat Duncan MacDonald and Neil Ross’ Escort by 28 seconds, with Keith Robathan and Steven Brown completing the podium in their BMW.

Jude MacDonald placed top Junior for the second round in succession in his Skoda Fabia R2, while Used Car Parts Subaru Cup honours were awarded to Max and Callum Redpath.

Up next for the SRC is a trip west to Argyll & Bute for the third running of the Argyll Rally on Saturday 22nd May.

Thorburn extends his championship lead and with Bogie unlikely to complete many more rounds, the challenge is on for his rivals to claw back as many points as possible in the second half of the season.