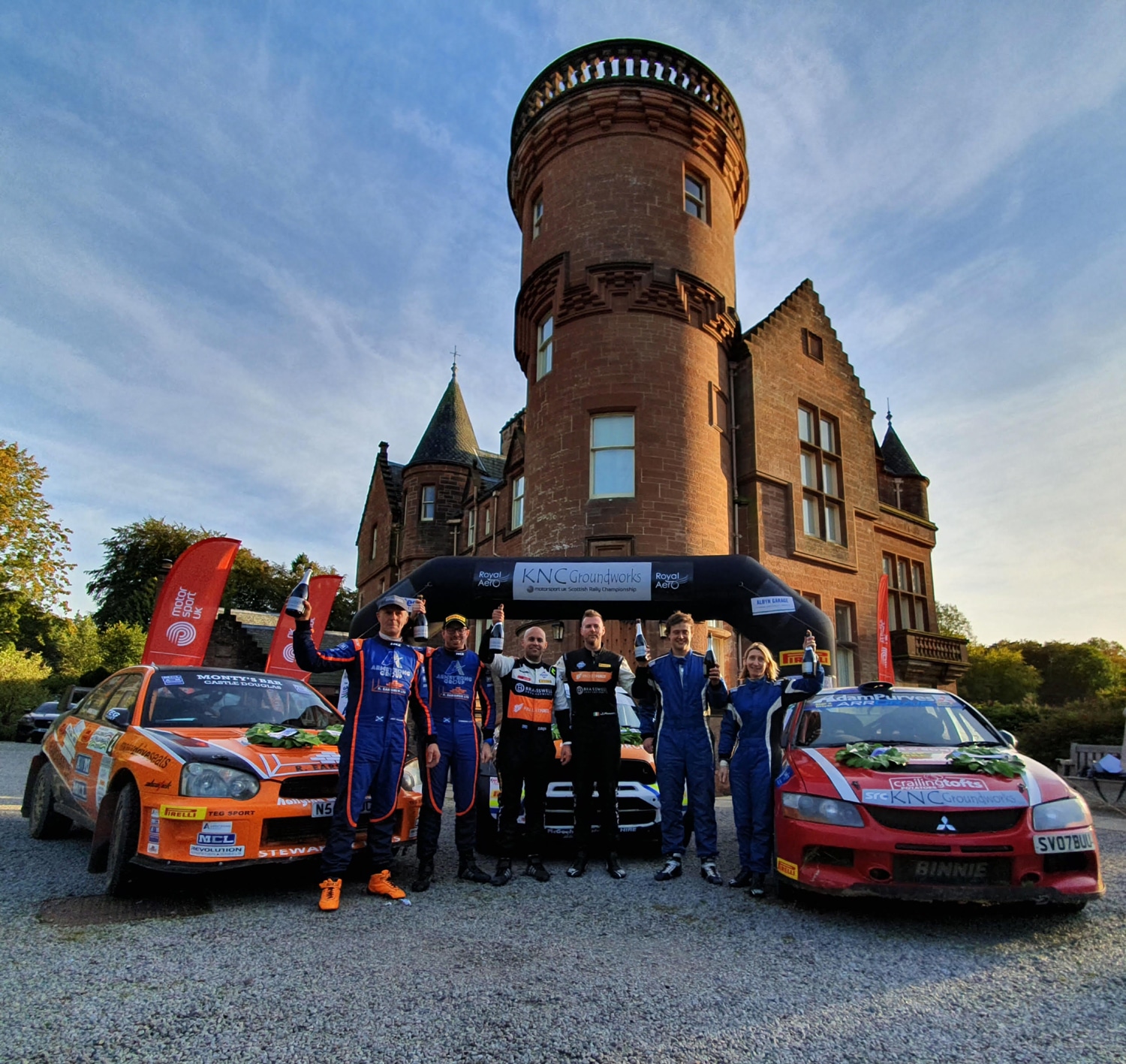 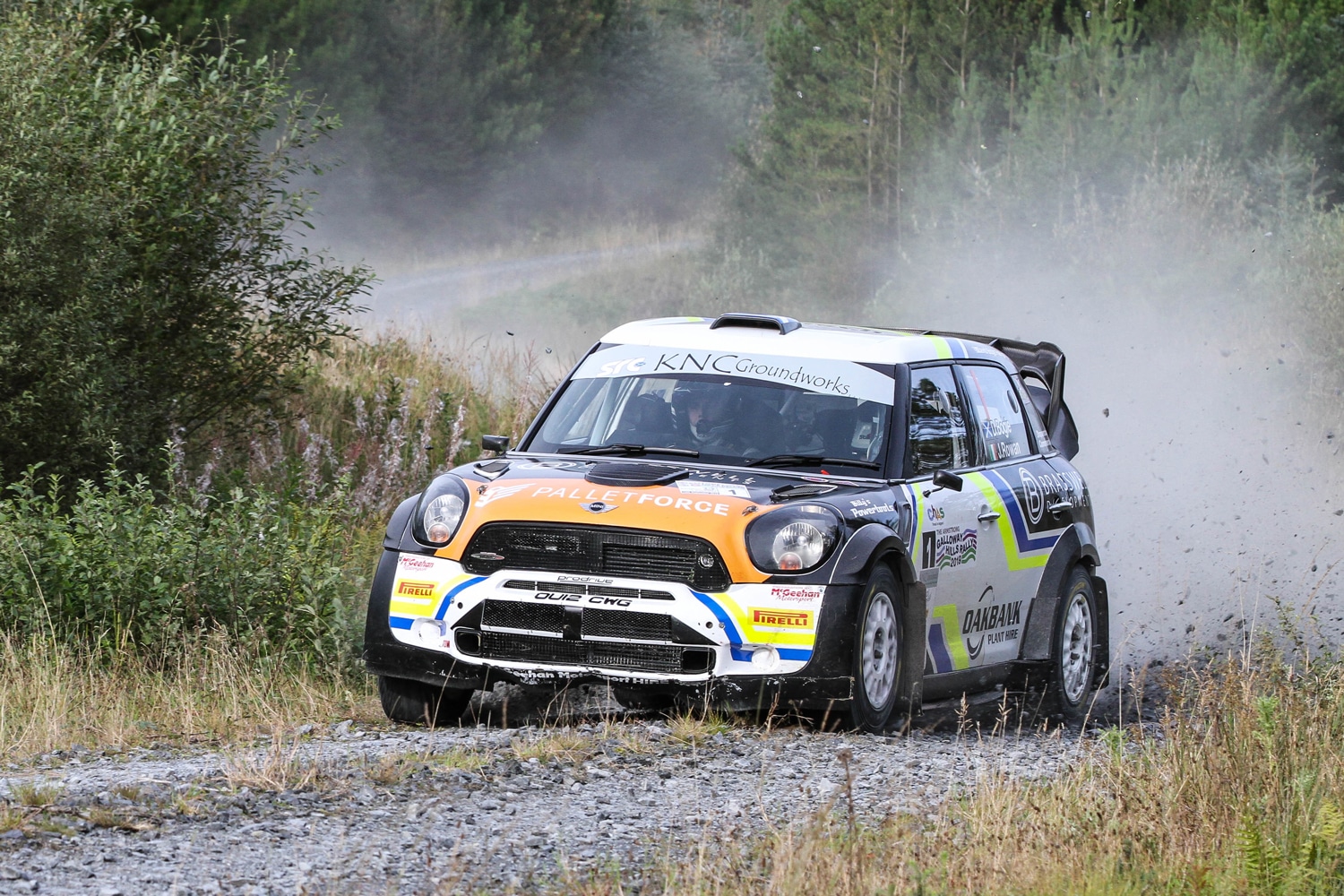 Co-driven by John Rowan, Bogie took victory in his MINI John Cooper Works WRC by over a minute from local hero Jock Armstrong and Cameron Fair’s Subaru Impreza. Michael Binnie and Claire Mole were third in a Mitsubishi Evo IX.

Switching to a hired McGeehan Motorsport Mini JCW WRC for the Galloway Hills, Bogie was undeterred and adapted to the new machine quickly. Pulling out a 10.3 second lead on the opening test, the gap stretched to 15s then 29s before service as the Dumfries driver went on to win all five of the rally’s stages.

A puncture on stage one Dalbeattie hampered Armstrong’s cause, but ultimately his Subaru Impreza couldn’t quite match the pace of the MINI upfront meaning Armstrong’s quest for an unprecedented 10th Galloway Hills Rally win goes on.

For Bogie it was his second SRC win of the season and fourth on this event, backing up his victory 12 months ago in a Skoda Fabia R5.

“Of course it was the first time in the MINI World Rally Car so it’s been a good day,” Bogie said.

“It took us a wee while to get up to speed with how the car handled this morning but as the day went on we got quicker and quicker and got the result that we wanted.

“The car has been fantastic, never missed a beat all day and John [Rowan] has done a great job so it was a really enjoyable day’s sport.”

“It could’ve been something else but not to be; it’s always disappointing to be second on your home rally,” Armstrong admitted.

“The season has ended up OK. I haven’t had a win this year so I was hoping to celebrate even more tonight. The season has come and gone so quickly but it’s been a good year.” 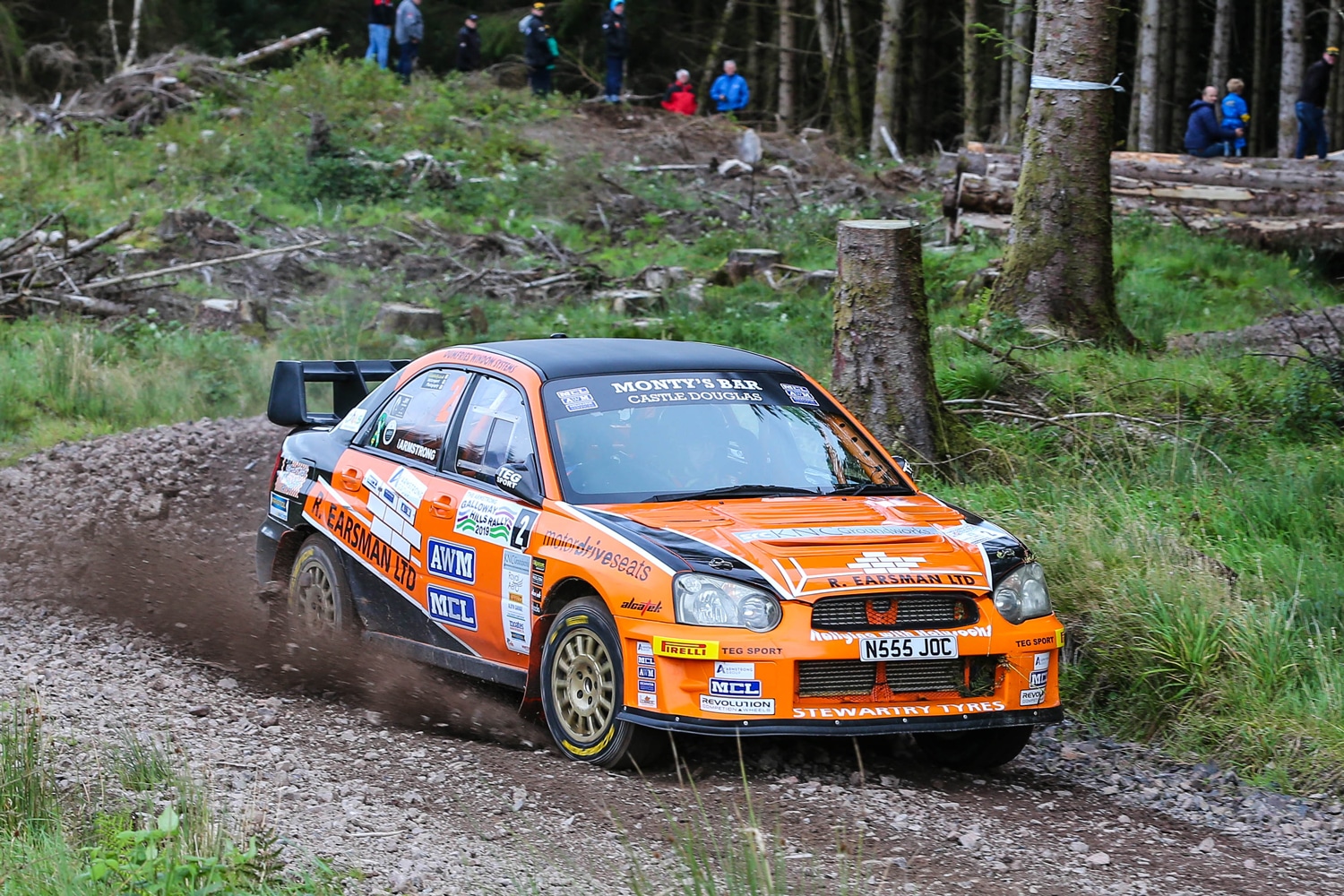 Armstrong sealed second in the championship with second place

Michael Binnie headed to the Galloway Hills in a scrap for a top three place in the championship. But the Cornhill ace his focus was solely on grabbing the best result he could. Locked in a fierce battle with the returning Rory Young and John Wink, Binnie began to edge clear as the morning progressed.

Wink’s demise on SS3 Dunharberry gave him some breathing space, but Binnie and Mole charged on to take their first ever SRC podium after finishing fourth on three previous occasions this season despite just three of his brakes working on the final stage.

“It feels great. We’ve been fourth three times this season by a handful of seconds so it’s unreal to get on the podium,” Binnie beamed.

“We had some really stiff competition today so we had to really drive the socks off the car so it was awesome fun. I wanted to come out and produce a good result today, I was up for it. I wanted a podium and we came out and got it.” 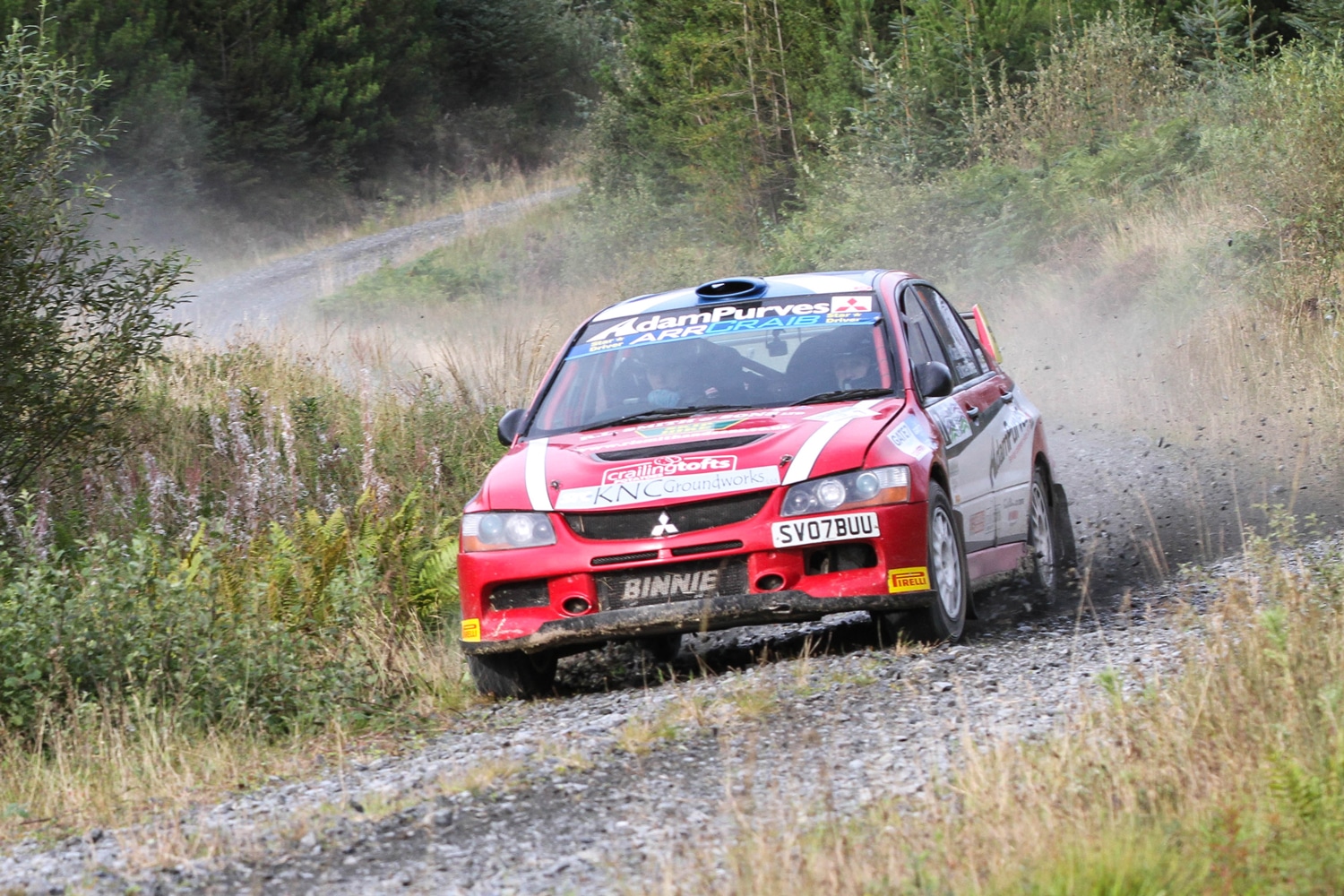 Young and Allan Cathers (Ford Fiesta R5) and Scott Beattie and Paula Swinscoe (Mitsubishi Evo VII) were fifth and sixth overall behind the Fiesta WRC of Stephen Petch and Michael Wilkinson but all three were ineligible for championship points, meaning Keith Morris and Terry Mallin took a superb fourth in their Mitsubishi Evo IX and the Albyn Garage SRC Challengers win.

Thomas Gray and Harry Marchbank had started the final Raiders Road test just one second ahead in a similar Evo IX, but wouldn’t emerge from the stage. It was a double-whammy as the off blew Gray’s championship as well as his chance to win the event.

That meant the ever-consistent Ian Baumgart and Sinclair Young swept in to grab the spoils at the 11th hour, taking the championship with fifth in their Subaru Impreza. Alan Dickson and Martin Forrest were a place behind and a point behind in the season’s overall table.

Mark McCulloch and Michael Hendry scored a long overdue Scottish 2WD win in their Ford Escort Mk2 with a superb seventh in the SRC. But there were bigger celebrations behind for Iain Wilson and Chris Williams, whose ninth behind Simon Hay and Mark Fisher (Mitsubishi Evo VI) and second in 2WD assured them of the coveted title for 2019. 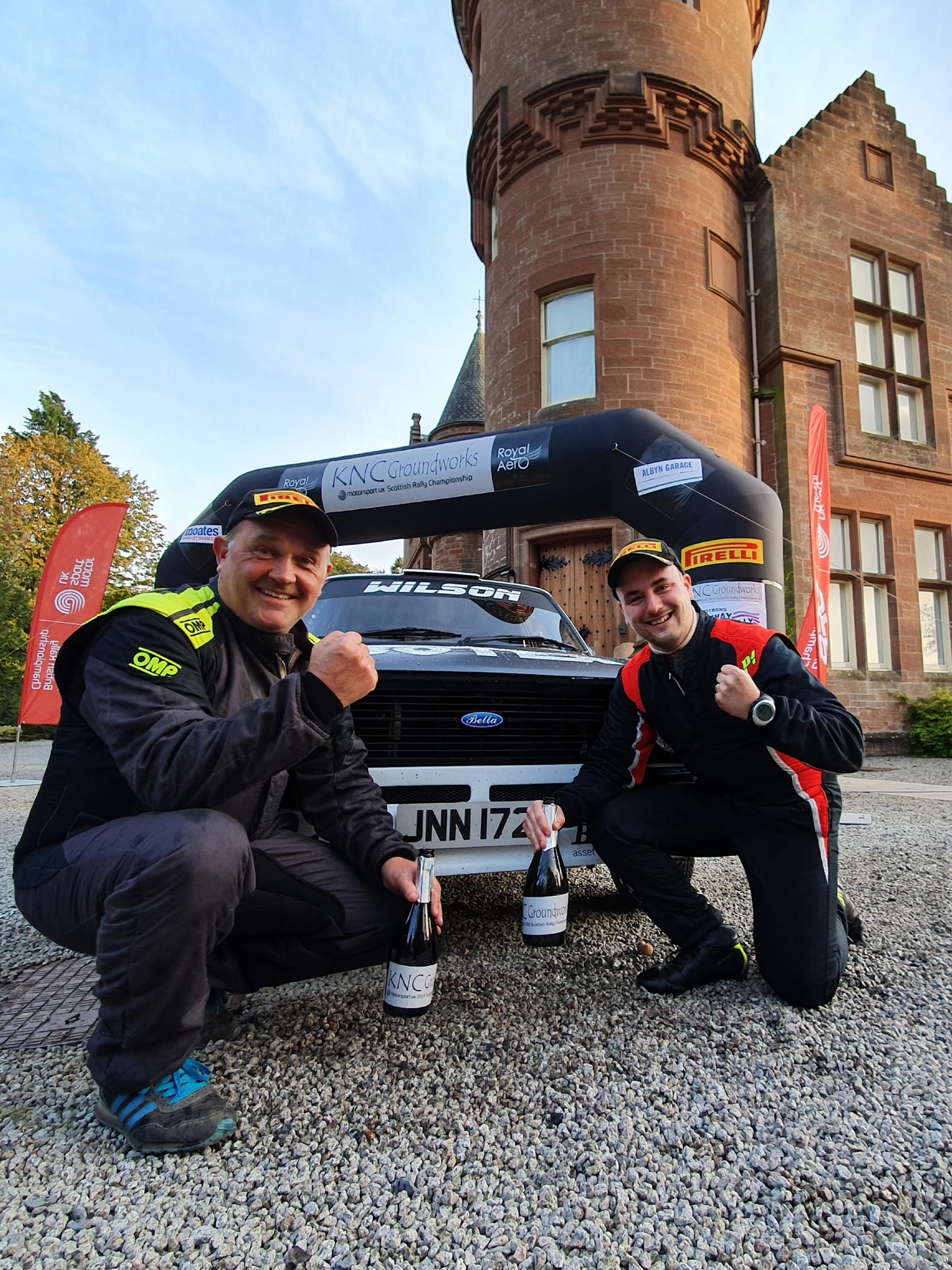 Jude MacDonald drove nice and steady in his Skoda Fabia R2 to grab the SRC Juniors crown and the day’s tuition with Tapio Laukkanen that goes with it, while Max Redpath took another strong Used Car Parts Subaru Cup win.
The KNC Groundworks Scottish Rally Championship has produced another fantastic year of rallying in its 51st season. Euan Thorburn and Paul Beaton wound up worthy champions, but there were plenty of other stars throughout the season.
Up next for the SRC is the John Horton Star Driver Award shoot-out at Knockhill Racing Circuit on Wednesday 16th October. The winner will receive a day’s coaching with legendary Finnish driver Tapio Laukkanen.