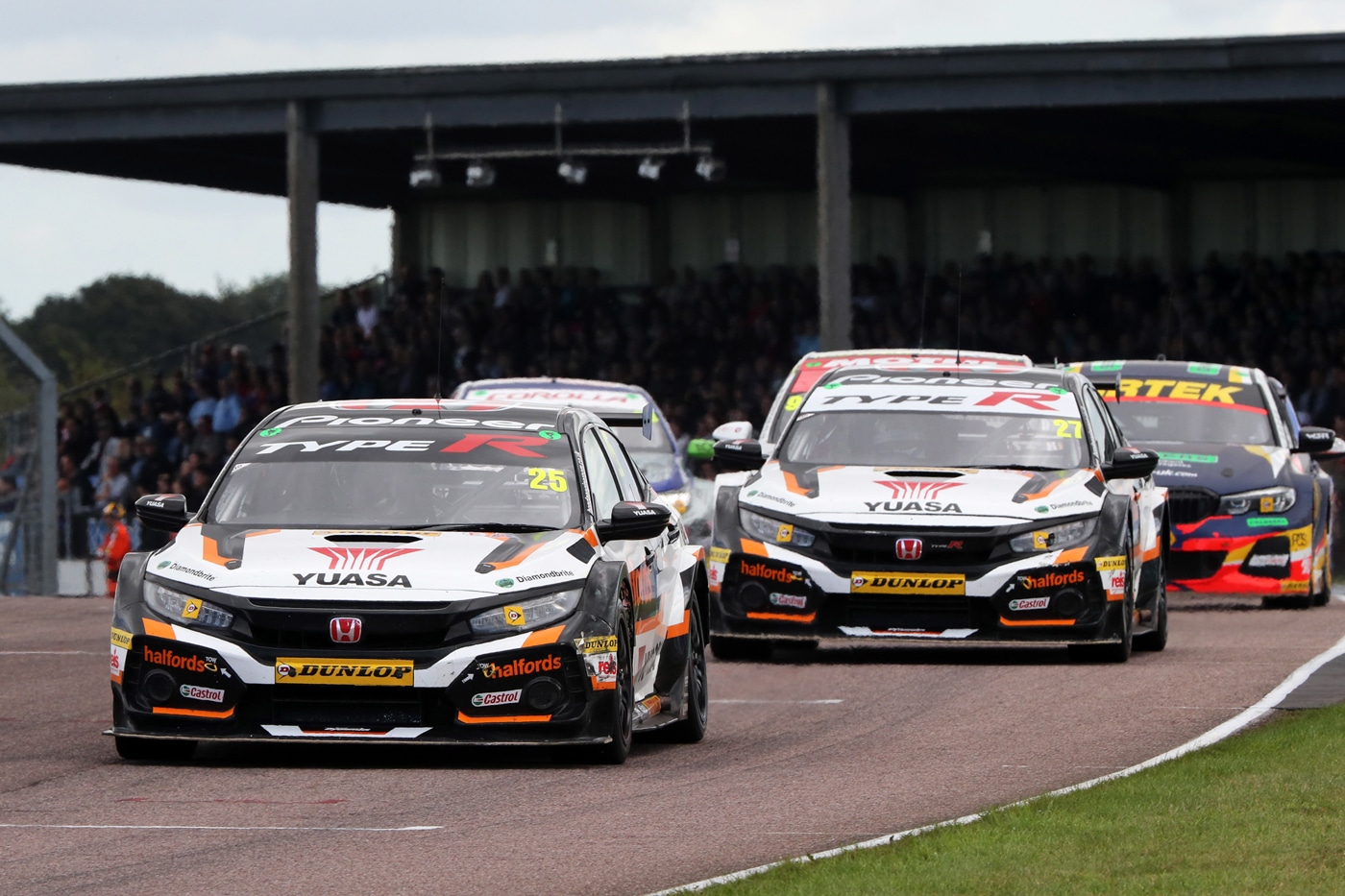 Qualifying at the fast Hampshire circuit brought contrasting fortunes for the two drivers. After topping the time sheets in first practice, Cammish took a competitive third grid spot with a lap of more than 111mph, less than one hundredth of a second behind pole position. Neal struggled with the setup of his Civic Type R to take a disappointing 17th on the grid, only half a second behind his team-mate.

With his Honda carrying more success ballast than either of its rivals ahead, Cammish did well to maintain third spot at the start of race one, and this quickly became second when Jason Plato was penalised for a jumped start. Thereafter the Honda kept in touch with leader Sam Tordoff, but the extra weight told as the race wore on. Cammish withstood the challenge of Adam Morgan to score his eighth podium finish of the season.

Neal staged an impressive comeback performance to carve through the field, passing fellow former champions Colin Turkington, Andy Jordan and Ashley Sutton on the way to a well-deserved eighth-place finish. 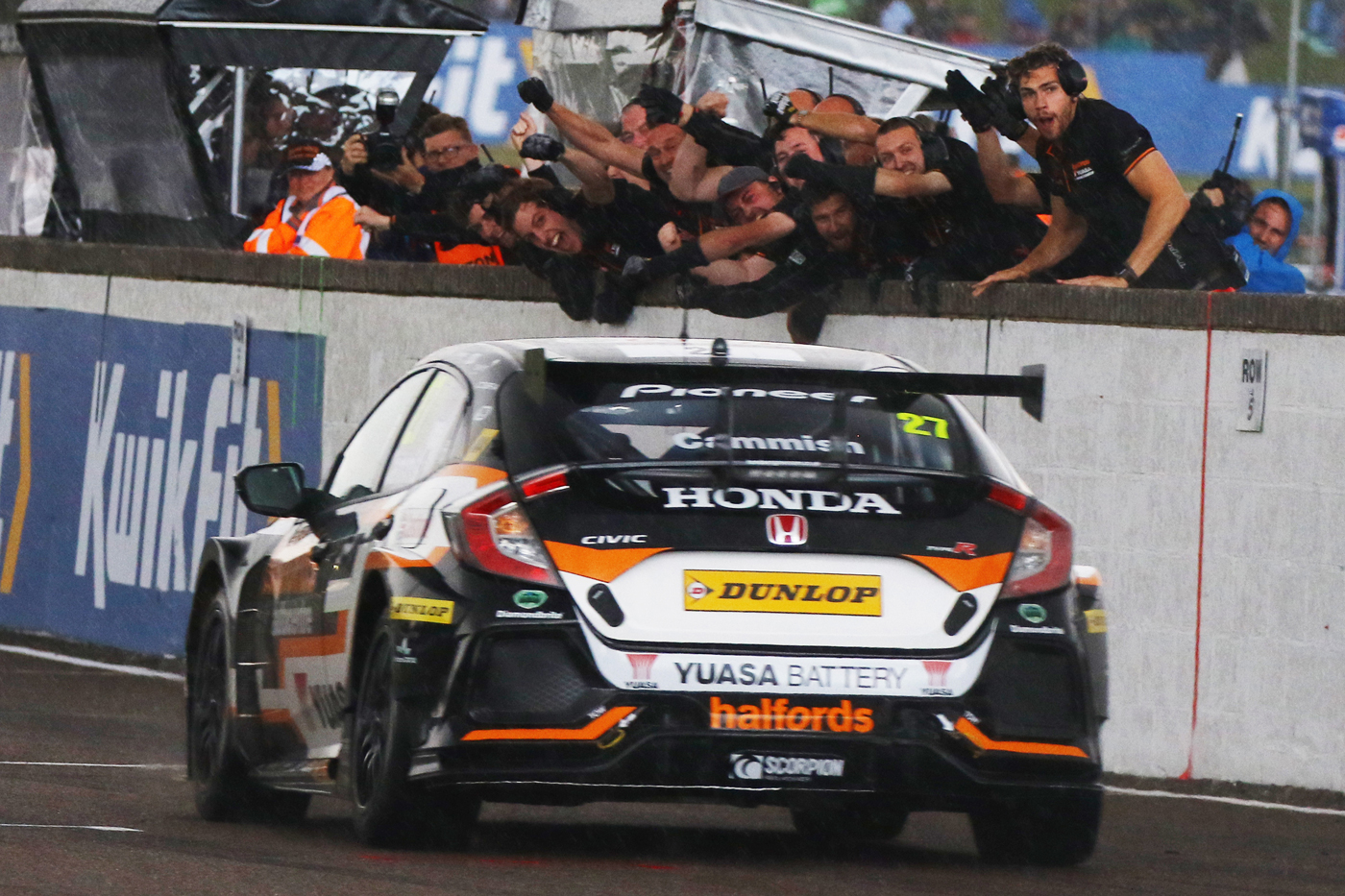 Weighed down by even more success ballast, Cammish’s car bogged down at the start of race two and he slipped back to sixth. Neal meanwhile made up a place and the two Hondas then ran together for several laps as part of a frantic battle involving several cars. Opportunistic passing with 11 laps down promoted Neal to fourth just ahead of his team-mate, and on the last corner he then rounded rival Tom Oliphant to secure third and maintain his record of at least one podium finish at Thruxton in each of the last 10 seasons. Cammish came home a fighting fifth.

Fortune then smiled on the Halfords Yuasa Racing drivers, the draw for the final race putting Cammish on the outside of the front row with Neal just behind in fourth. The field lined up under threatening skies, and after initially being outdragged off the line by Oliphant, Cammish quickly regained second spot and closed in on leader Rob Collard.

Rain began to fall around the circuit as the Honda made several passing attempts on the run to the chicane, finally making the move stick with four laps left. Skillfully controlling his slick-tyred car on the now rain-soaked track, Cammish stretched his lead to secure the Halfords Yuasa squad’s first victory of the season. To complete the team’s joy Matt Neal took third spot.

Cammish and Neal now lie third and seventh in the driver’s title chase heading towards the next rounds at Knockhill in Scotland, while Honda has closed the gap in the manufacturers’ championship, holding a strong second, and Halfords Yuasa Racing regained the lead of the Teams points chase. 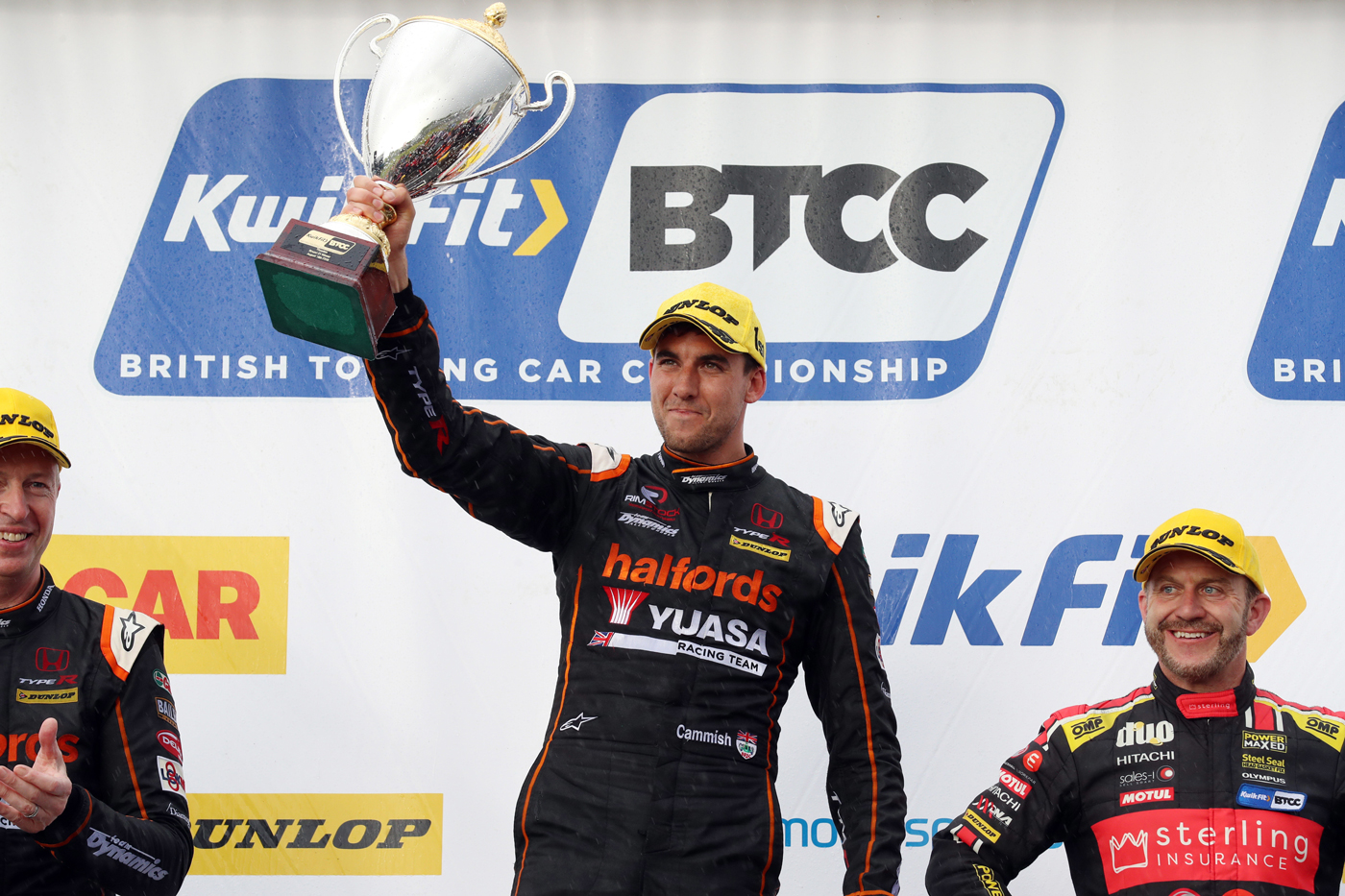 My best weekend this year, first, second and fifth. To finish race one in P2 with the weight in was a good effort. Race 2 I almost stalled at the start and if I had my weekend would have been ruined – shows you need a bit of luck in Touring Cars.
I battled back to fifth and once the weight came out for race 3 I knew we had a good chance. I drove a sensible race, didn’t take too much out of the tyre in the opening laps. It was difficult with the rain at the end, but the team kept me cool and calm and we took the win.
I was on pole at Knockhill last year. I’ll go there with the car much heavier than ever before but that won’t stop me giving it a good go.

We have had a great day, especially considering how we started after yesterday’s performance – I’m very relieved. I didn’t get a win but the next best thing – four podiums for us as a team, our best weekend of the year so far.
Knockhill is a circuit that favours some of our rivals but we’ll go there in confident mood and see what we can do.