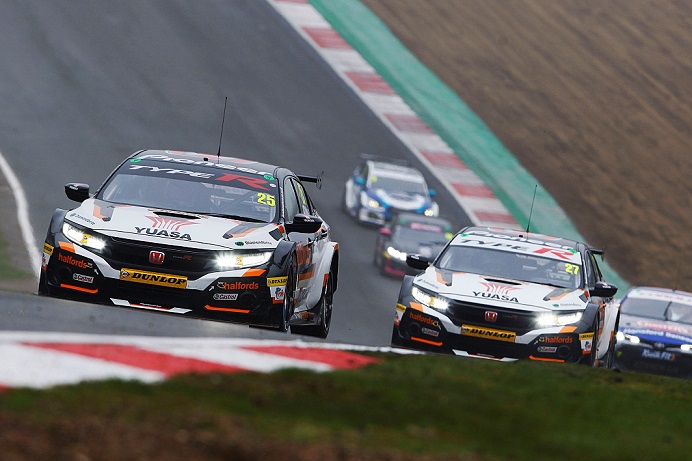 Honda BTCC drivers Matt Neal and Dan Cammish are fired up and optimistic as the British Touring Car Championship heads to its second meeting of the season at Donington Park.

The team emerged from the opening rounds of the championship with the lead in the manufacturers title chase, despite challenging and frustrating races for both drivers in which constantly changing weather wrecked carefully honed race strategy.

The Halfords Yuasa Racing team considers Donington, where rounds 4, 5 and 6 of the BTCC will take place on Sunday 28th April, as its home circuit, and has enjoyed much success around the fast curves of the two-mile Leicestershire venue over the years. In nine seasons as the official Honda manufacturer entry, the team has won nine races at Donington.

The circuit also holds fond memories for Matt Neal, who took his first BTCC race win at Donington in 1999 and the first overall win for an independent, earning him a cheque for £250,000.

Dan Cammish, meanwhile, scored his first BTCC podium at the 2018 Donington meeting, in only the second weekend in the championship for both him and the Honda Civic Type R FK8 race car.

Matt Neal – Halfords Yuasa Racing driver and Team Dynamics Director
“Brands Hatch really was a case of what could have been! We had a strong car under us all weekend and in Race 1 I was pleased, with the changing conditions, to finish the highest of the wet tyre runners. Race 3 I felt, even with the option tyre, that we could have had our first race win of the season, but unfortunately with the contact with Tom Chilton and then later with Stephen Jelley I was driving a wounded car and was lucky to finish where I did!
Donington we class as our ‘local’ circuit for the team and I’m confident that we can hit the ground running. It is a proper driver’s circuit and one that suits the Honda Civic FK8 with its high-speed corners. It’s also a circuit that holds special memories for me after winning my first race here in 1999.”

Dan Cammish – Halfords Yuasa Racing driver
“Brands was another character-building weekend for me! The times are so tight now across the board and particularly on the Brands Indy circuit, it was difficult to make progress through the field. But I go to Donington hoping that I can replicate my first podium of the year as I did last year.
Donington is a fast-flowing circuit that suits both my driving style and the car, so I’m hopeful for a good points haul to carry me back up the drivers table and to help our Team and Manufacturer positions. Bring on the weekend!”