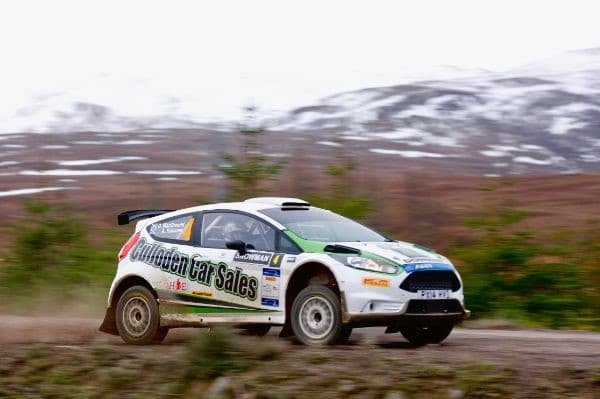 The 2019 KNC Groundworks Ltd Motorsport UK Scottish Rally Championship (SRC) is set for an epic start to the year as a sublime entry heads north for the Coogie Urquhart Snowman Rally in Inverness on Saturday 9th February.

The Snowman Rally is the traditional curtain raiser for the SRC, and has established a reputation as one of the trickiest events on the calendar due to the nature of the stages and the unpredictable Highland weather.

This year’s event, named in honour of the late Coogie Urquhart, a former Snowman Clerk of the Course, promises to be even trickier than ever with absolutely no double mileage included in the route. This means every single stage mile the competitors face will be unique, demanding ultimate concentration from start to finish.

As ever with a new season, the form book is well and truly open and ready to be rewritten as a whole number of drivers head to the event with a realistic shot at winning.

Last year’s champion Andrew Gallacher may sadly be missing from the entry list, but the big news is 2017 Scottish Rally Champions Euan Thorburn and Paul Beaton are back after a year out in 2018, ensuring three of the last four SRC champions are in action on the Snowman.

Thorburn has traded in the Fiesta R5 he took to the 2017 crown for a Ford Focus WRC ’05, an upgraded version of the car he took to his maiden Scottish title back in 2014. The Duns driver may be a little rusty on the Snowman, but is expected to be right in the thick of the battle as the season progresses.

Five-time Scottish champion David Bogie and co-driver John Rowan are one of the favourites to claim victory on the season-opener in their Skoda Fabia R5. Bogie is equal top of the all-time Snowman winners list with three victories and would dearly love to make that four.

The third of the SRC champions lining up in Inverness is Jock Armstrong and co-driver Cameron Fair in their familiar TEG Sport Subaru Impreza. Armstrong’s Subaru consistently punches above its weight in an R5 and WRC infested crowd, so the Castle Douglas star will have to do it the hard way if he’s serious about becoming a triple Scottish champion.

The man they all have to watch is Fiesta R5 driver Garry Pearson, who lines up for a full season with Welshman Dale Bowen alongside. Pearson’s only aim is to be Scottish champion this year and after his heartbreak of 2016, the motivation is there for the Duns pilot to pull it off.

Donnie Macdonald can’t be discounted from the title equation either after challenging Gallacher all the way last year in his Ford Fiesta R5+. Andrew Falconer is back in the co-driver’s seat, so the local crew will be favourites among the fans to claim a second Snowman Rally victory.

A whole host of other drivers are also serious contenders as the SRC prepares for one its most exciting seasons ever.

In the R5 corner, John Wink, Mark McCulloch and Lawrence Whyte will all be fancying their chances heading into 2019.

Wink and Forrest were a revelation last year as they got to grips with their Hyundai i20 R5, fighting their way up to third in the championship come the end of the season.

McCulloch meanwhile was perhaps the unluckiest driver of 2018. Co-driven by Michael Hendry, the pair were in serious contention on the Snowman and Speyside Stages before mechanical gremlins slowed them. A breakthrough second place was achieved on the Scottish before the duo switched to a Subaru Impreza, so they’ll be looking to pick up where they left off in the Fiesta R5.

Whyte is one of most promising drivers within the field, and although his season was punctuated with costly errors last year, he heads into 2019 with a full season of experience under his belt.

Beginning their WRC adventure are Bruce McCombie and Michael Coutts in a Ford Focus WRC after several years in the cockpit of a Mitsubishi Evo IX. McCombie contested the Grizedale Stages last year to acclimatise himself to the car, and take solace in the fact he’s driving the same type of car that won last year’s championship.

Freddie Milne leads the Mitsubishi charge and is one to watch after some standout podium results last year in a Subaru Impreza WRC. He will drive and Evo IX and will be co-driven by renowned navigator Patrick Walsh.

Michael Binnie and Claire Mole return in their Mitsubishi but will have it tough against the gaggle of R5s and WRCs in the field, while Scott MacBeth and Thomas Gray are ones to watch as they step up to Mitsubishi power.

The Scottish 2WD Championship is looking equally as poised this year as last year’s runaway champions Greg McKnight and Harry Marchbank are absent. This opens the door for a new name to take top honours on the Snowman Rally and beyond.

Duncan MacDonald and Neil Ross are among the favourites in their Ford Escort Mk2 having been in contention the last couple of years, while Paul McErlean and Niall McKenna make the trip across the Irish Sea, returning for another stab at SRC glory.

Both men will have to fend off the returning Iain Wilson however, who alongside former SRC John Horton Star Driver Award winner Keith Riddick, is competing in a more powerful example.

There are several fresh faces entering the world of front-wheel-drive rallying that are worth keeping an eye on. Luke McLaren and Craig Wallace are expected to go well in their potent Honda Civic, while all eyes will be on Kevin Gray and Daniel Christie as they wheel out their long-awaited Suzuki Swift.

The SRC Challengers championship returns for a fourth consecutive year, this year sponsored by Simon Hay’s firm Albyn Garage Ltd. With the majority of last year’s contenders breaking into the top 10 overall, this battle is also set to be fresh and exciting in 2019.

And if the incentive to win wasn’t enough for the class of 2019, the SRC John Horton Star Driver Award is also back so the entire field will be out to impress and win a ticket to the end-of-season shoot-out.

The Coogie Urquhart Snowman Rally leaves the city of Inverness on Saturday morning before heading into the nearby forests for over 40 miles of rallying action. The event returns to its HQ at Fairways Leisure Centre in the afternoon where the winner will be crowned.