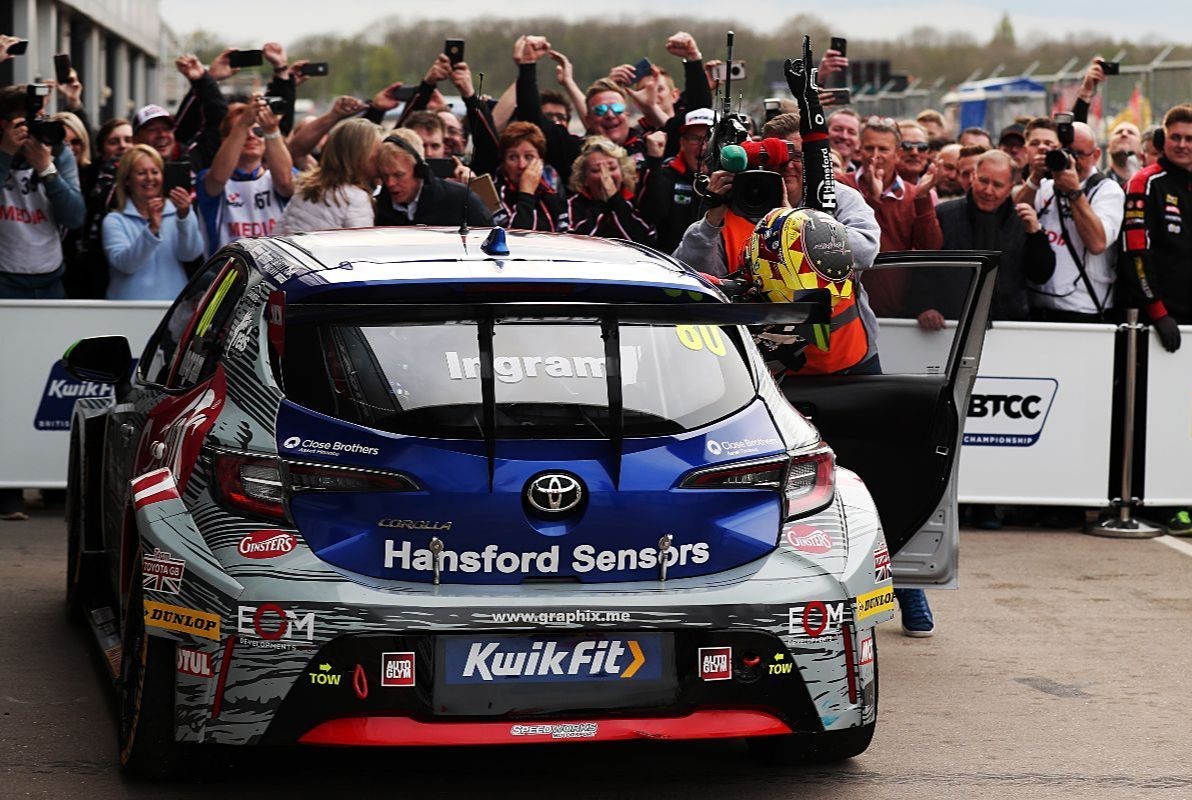 Team Toyota GB with Ginsters welcomed some 4,500 members and families from Toyota Manufacturing UK to Donington Park last weekend (27/28 April), and Tom Ingram sent every one of them home with a smile on their face after sensationally clinching the new Toyota Corolla’s breakthrough British Touring Car Championship race victory.

Following a visit to the Japanese manufacturer’s nearby Burnaston plant, Ingram arrived at Donington eager to build upon the promising start he and Team Toyota GB with Ginsters had made to the 2019 BTCC campaign a fortnight earlier at Brands Hatch.

On the pace from the outset in free practice behind the wheel of the distinctively-liveried #80 entry – proudly sporting the iconic Cornish colours of the nation’s favourite pasty-maker, Ginsters – the 25-year-old Bucks-born ace carefully navigated a rain and incident-disrupted qualifying session to snare sixth spot on the starting grid amongst the 30 high-calibre protagonists, less than two tenths-of-a-second shy of the front row.

He converted that into a strong fifth place in race one, harrying three-time series title-holder Matt Neal right the way to the chequered flag as he put more valuable points on the board. Running on the less favourable hard-compound rubber in race two and now carrying 30kg of success ballast – more than anybody else on the ‘option’ tyre – Ingram produced an excellent defensive drive to cling on to a second consecutive top ten finish, crucially earning him pole position for the day’s reversed grid finale.

In front of the live ITV4 television cameras – not to mention his new, 4,500-strong TMUK ‘fan club’ swelling the popular Leicestershire circuit’s grandstands – the reigning two-time BTCC Independents’ Champion led from lights-to-flag. After establishing an early advantage, he proceeded to confidently control the pace to secure both his and Northwich, Cheshire-based Speedworks Motorsport’s tenth career BTCC triumph – and the first for the Corolla in the UK’s premier motor racing series in three decades.

A flawless performance, the result made Ingram the third-highest scorer of the weekend while maintaining his impressive recent record of winning at Donington every year since 2017. It also vaulted him four spots up the championship table from tenth into sixth, as he halved his deficit to the top of the Drivers’ standings to just 12 points heading next to Thruxton in Hampshire on 18/19 May. Team Toyota GB with Ginsters similarly climbed four places up the order in the Teams’ battle, rising to eighth amongst the 19 contenders.

“Every win is special, but this one more than most. All the hard work, all the expectations when you bring out a new car, the added pressure now of being an official manufacturer-backed entry – to repay all of that with the Corolla’s first victory in only its sixth race and be able to share the moment with 4,500 team fans at our new ‘home’ track, well, it really doesn’t get much better than that, does it?

“Starting from pole in race three, we kind of had to turn that into a win and to do so was genuinely a fairytale ending to the weekend. The support we received from TMUK was incredible – it was pretty overwhelming, actually – and everybody that came was so passionate about what we are doing, which was great to see. The sense of satisfaction in getting the job done in front of them all was immense. It was an amazing result, and something we will I’m sure look back upon in years to come as a really important milestone on this journey.

“The Corolla was an absolute pleasure to drive in race three – just fantastic – and a wave of emotion came over me when the chequered flag fell. This win means so much to us as a team and to me personally after a difficult week. Everybody at Speedworks has put in so much effort over the winter and start of the season, and I honestly can’t thank the Team Toyota GB with Ginsters crew enough – they’ve been out of this world. What a weekend to score the new Corolla’s first BTCC win – hopefully the first of many…”

“It was a pretty mind-blowing weekend, all-in-all – we always expected to be competitive at Donington, but still, to get the new Corolla’s first BTCC race win in front of so many people from TMUK and with all that added pressure and expectation, you genuinely couldn’t script it. Absolutely fantastic – I don’t think there was a single dry eye in the house.

“The work put in by the Speedworks guys to build, develop and refine this car over the past few months has been nothing short of phenomenal, and this result is testament to the outstanding job done by each and every one of them – I really couldn’t be any prouder. We have a great crew here, Tom is a great driver – and, as I think the weekend proved, we have a great car at our disposal too.

“Tom produced an excellent drive in race one, but we knew we were going to be up against it in race two, with the extra weight on-board and being one of the few cars on the hard tyre. Realistically, we thought simply staying inside the top 15 would be a good result, so to come home tenth in difficult circumstances was really pleasing and turned out to be a key factor in setting us up for race three success.

“We’ve now scored well in all six races so far this season and keep taking small steps forward – we’re learning all the time and consistently moving in the right direction. Best of all, there is still plenty more to come – we are only going to get stronger from this point on.”

Find out more information on our partners here, or stay up to date by visiting Facebook and Twitter.