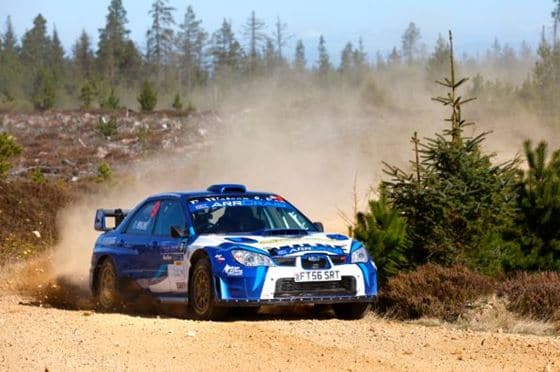 The 2019 KNC Groundworks Ltd Motorsport UK Scottish Rally Championship (SRC) has attracted a variety of thrilling sponsors and partners ahead of the 51st season in the series’ history.

The Scottish Rally Championship has established a fearsome reputation as one of the most competitive and exhilarating contests in the UK, and has helped launch the careers of British and World Rally champions in the past including the legendary Colin McRae.

This has not been lost on global aviation firm Royal Aero, who are embarking upon an exciting relationship with the SRC as a media partner. The business is one of the largest independent European based suppliers of refurbished commercial engine parts and technical consultancy services to the aviation industry. With headquarters in Germany and a UK office in Sussex, their involvement brings a truly international flavour to the SRC in 2019.

The live coverage from stage ends on all seven rounds of the championship has rapidly become one of the most popular features of the SRC’s media coverage in recent years. With backing from Royal Aero, these broadcasts are set to be even bigger and more ambitious than ever before. The SRC’s official Facebook page will be the place to watch absolutely everything as it unfolds throughout the season.

Championship organisers are also delighted to confirm that Pirelli Motorsport has returned to partner the SRC for yet another year in collaboration with Andrew Wood Motorsport. Appetising incentives will be available to the winner of the John Horton Star Drive Award and the SRC Junior Champion with multiple Scottish champion Wood’s on-event advice consistently available too.

Reis Motorsport Insurance are also back onboard for a third consecutive year, after first partnering the SRC in 2016. The firm takes on the title of official insurance partner once again, assisting events, the championship and competitors with their insurance needs.