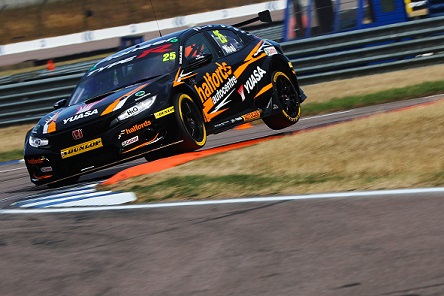 An update from one of the Reis Motorsport Insurance partners‘…

The Honda Civic Type R cars of Halfords Yuasa Racing are ready to race for titles in the 2019 British Touring Car Championship after both 2018 drivers Matt Neal and Dan Cammish re-signed for the new season.

Team Dynamics, which runs the Halfords Yuasa Racing team, is targeting ‘Championship titles’ after an impressive first season with the potent new FK8 Civic Type R, in which the team finished a creditable second in the Manufacturers and Teams championships.

Neal, 27 years a BTCC driver and a three-time overall champion, took the new car’s first win at Thruxton in May but the highlight of his season was victory in the extended distance ‘Diamond Double’ race at Snetterton in August, celebrating the 60th year of the BTCC.

Cammish quickly adapted to the car and the 29-year-old crowned his debut BTCC season with two wins on the final race weekend at Brands Hatch, having in the previous round at Silverstone secured the 2018 Jack Sears Trophy for drivers who had never previously scored a podium place.

Team Dynamics heads confidently into its ninth consecutive BTCC season as Honda’s manufacturer team, and its 16th racing Honda cars. With the experience of a full season’s racing and winter development of the Civic Type R FK8, the team expects to see the Hondas at the sharp end of the manufacturer, team and driver title chases in 2019.

Dave Hodgetts – Honda UK Managing Director
“All of us at Honda are looking forward to the new BTCC season with a great deal of confidence. None of our rivals can boast the three-time champion pedigree and experience of Matt Neal coupled with the talent and raw hunger of Dan Cammish, who delivered a strong performance in his first season. We are confident that both our drivers will be challenging for top honours this season.”

Matt Neal – Halfords Yuasa Racing driver and Team Dynamics Director
“Last year we got to understand the car really well and made some changes over the winter to make it even stronger. I’m hungry to get my fourth BTCC title so I’ll be going all guns blazing with Dan to secure the Team and Manufacturer Championships first and then hopefully be in a position to take the drivers’ mantle.”

Dan Cammish – Halfords Yuasa Racing driver
“Getting to know the Honda Civic FK8 BTCC car in 2018 was a steep learning curve, but I think I proved to the team throughout the season that I had the speed in me, it was just experience of this formula that I lacked. To finish the season on a high with back-to-back victories was amazing and to also win the Jack Sears Trophy was a highlight of my year. With all that experience under my belt I’m hoping to come back stronger this season and challenge for the overall title.”