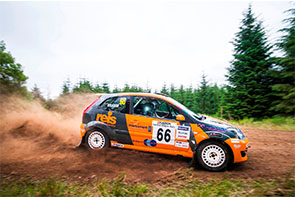 Bingley rally ace Sam Bilham secured second place in the Fiesta ST Trophy last weekend as he took his Reis Motorsport Insurance backed Ford to its inaugural class win at Trackrod Rally Yorkshire.  Maintaining his 100 per cent finishing record this season, Bilham snatched victory on the very last stage of the event to take his first victory in the series at his home round.

The BTRDA organised championship has proved to be a close tussle all year and the Bilham name has been at the top of the leader board for most of the year.  With dropped scores coming into effect during the closing stages of the season, Bilham headed to the final round of the series needing to score strongly to be in with a chance of staying in one of the podium positions.

The 19 year old would be joined by fellow Yorkshireman James Whitaker for this event and the duo headed into the five-stage event with the aim of bettering Bilham’s second place at the Carlisle Rally.  Things would not look quite so positive after the opening stage of the day however as brake problems would hamper progress in the some of the tight and twisty sections of the Dalby Forest stages, languishing down in fourth place.

A chargeback on the second test saw Bilham leap into second spot after a stunning time through the 13 mile Langdale test and the team set about fixing the brake issue that blighted his progress in the service halt.

Bilham knew that he needed to up his pace and duly mounted a charge, emerging from the penultimate stage of the day just half a second adrift from first. Just the six mile Gale Rigg stage remained and Bilham had it all to do if he was to take his first victory of 2016. Using his experience gained from the series this season, Bilham pulled out a six second advantage on the final stage to take the win and secure runner-up spot in the Fiesta ST Trophy.

“There is nothing like taking a win on your home event” said Bilham. “But to fight back from fourth on the first stage today to take victory by six seconds really is the icing on the cake.  A win this year has been a long time coming; we have been so very close on a number of occasions so to do it here in Yorkshire is a great feeling”.

“It hasn’t been an easy season, but we have finished every round we started and that’s a huge testament to the team and the guys we have behind us” he continues. “It’s been a long year and I’m pleased with the progress I have made in my first season in the car. Taking second in the Fiesta ST Trophy is also a great achievement, it’s been a closely fought series and could have been anyone’s really. Thanks must go to all our supporters for their efforts this year; we could not have done this without them.”