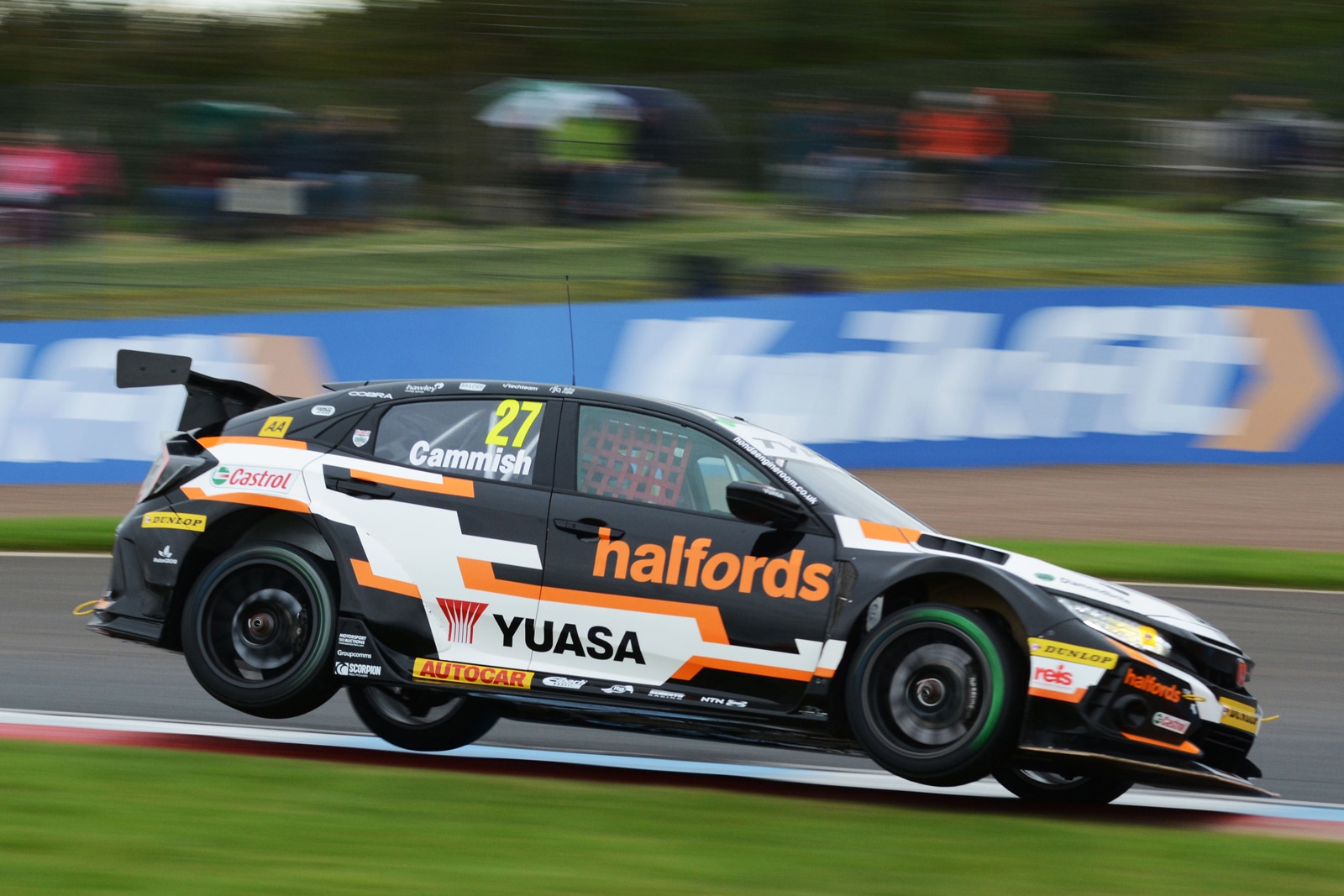 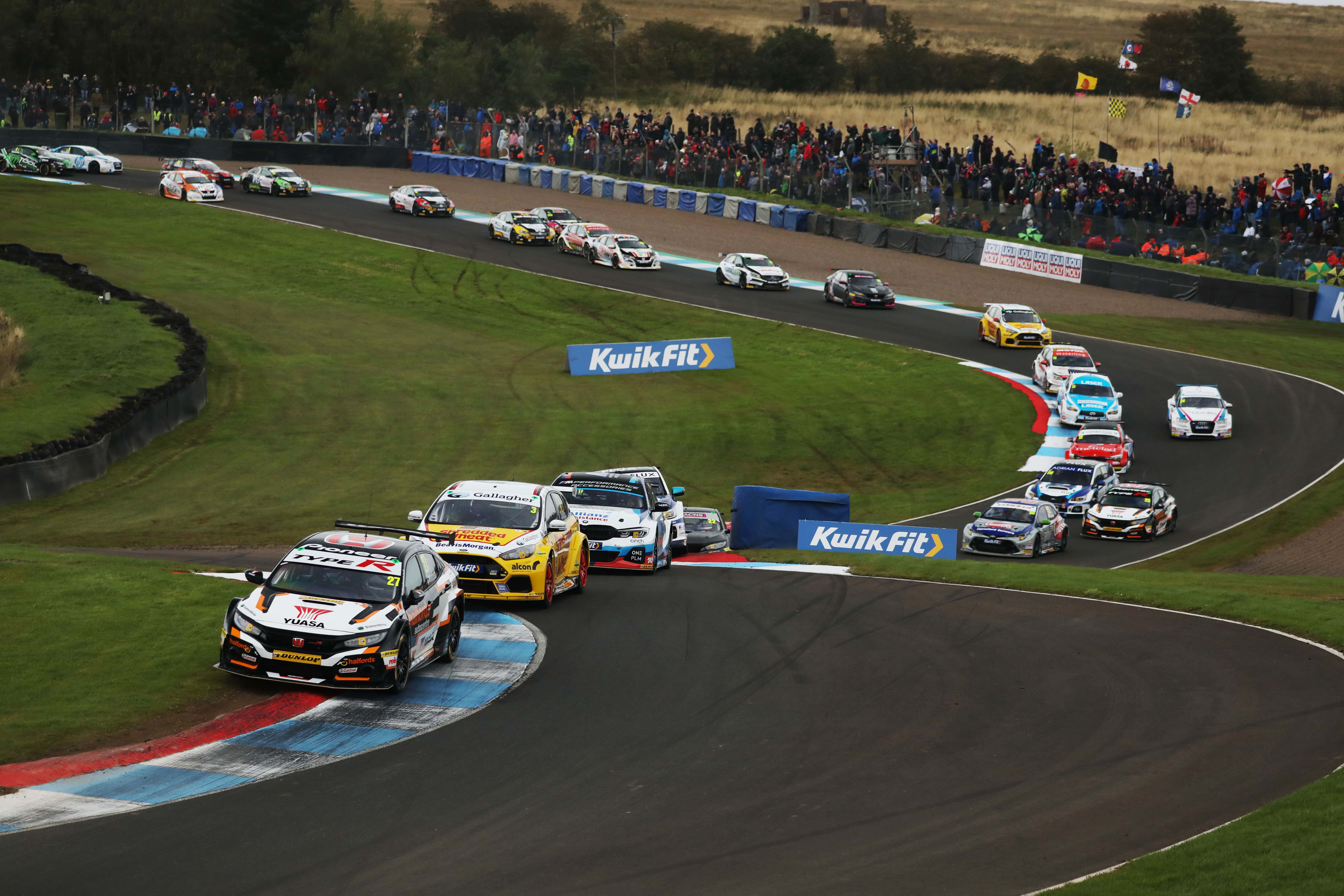 Qualifying around the tight and undulating 1.3-mile track brought mixed fortunes for the two Honda drivers. Neal struggled to find a clear lap in his Civic Type R and took tenth on the grid, 41 hundredths of a second behind pole position, but Cammish earned the outside front-row spot, ahead of his closest championship rivals and just 24 hundredths shy of the fastest qualifier.

Taking the medium compound tyre option for race one, Cammish was overtaken off the grid by Andrew Jordan, then lost third to Tom Chilton, both rivals on the preferred soft tyre. The Honda man quickly repassed Chilton and then triumphed in a race-long battle with championship leader Colin Turkington, to hold onto his third place and earn his 10th podium finish of the year.

Matt Neal’s race was short-lived. On the second lap rival Ashley Sutton tried to overtake the Honda into McIntyres corner and the two cars made contact, both suffering terminal suspension damage and relegating Neal to a back-of-the-grid start in race 2. 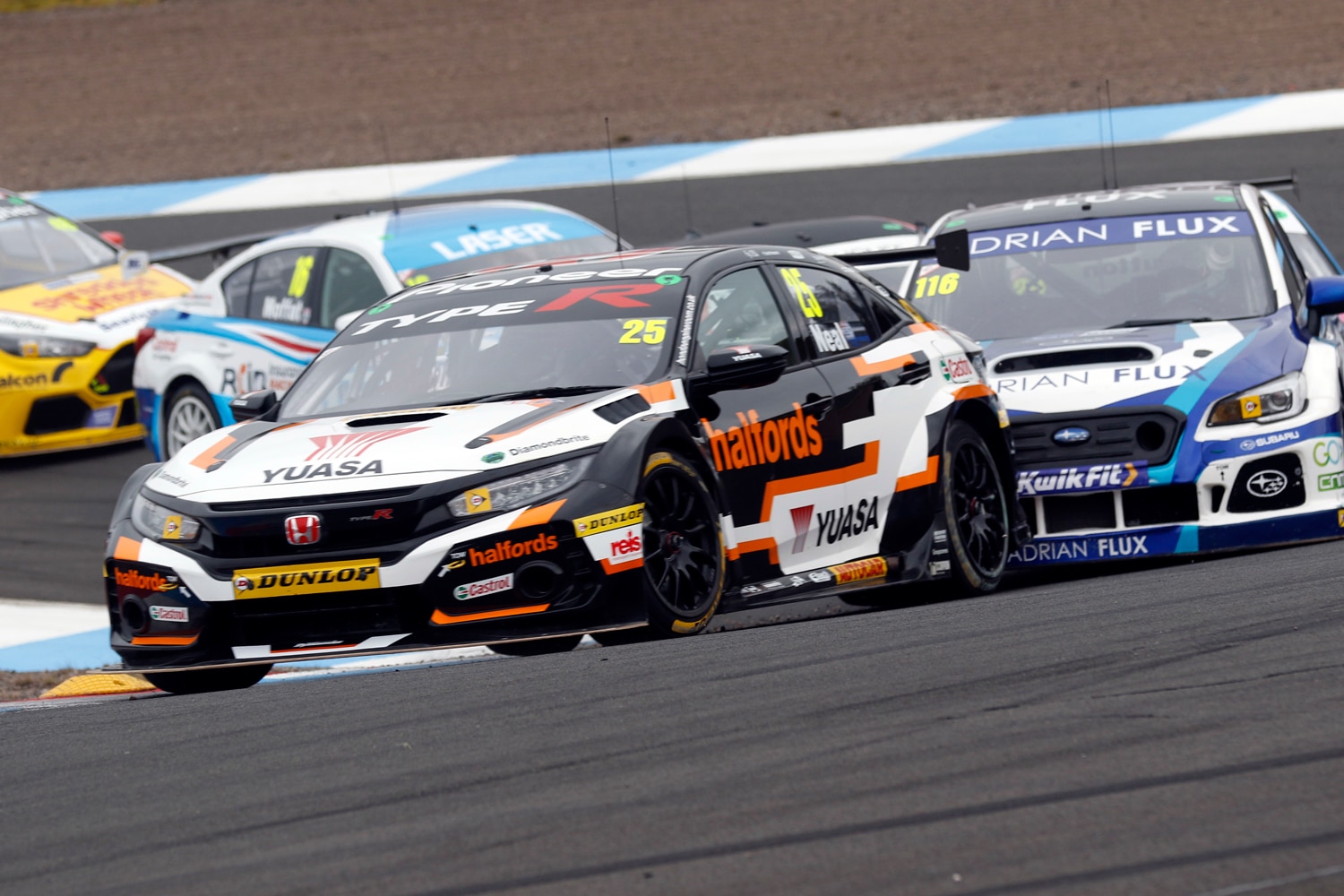 Cammish lined up for the second race with his Civic Type R on the soft compound tyre, and held off the fast-starting Turkington as the lights went green. With six laps down the Honda man dived inside race one winner Rory Butcher at the hairpin to claim second spot, thereafter keeping race leader Andy Jordan in his sights to take yet another podium and a welcome haul of championship points.

Starting down in 26th spot after repairs to his Civic Type R, Neal staged another of the comeback drives he has become renowned for in 2019. This time, however he could only reach 16th place, one shy of scoring a championship point.

The reverse grid draw for the final race put Cammish in eighth on the grid, closest championship rival Jordan just behind. In a dramatic first lap the Honda just avoided an accident that removed Jordan from the action, and then became involved in a frantic multi-car battle. Sixth place at the chequered flag was the reward, along with a significant gain in the championship as the Honda driver outscored both drivers ahead of him in the points.

Starting 16th Matt Neal fought an even more frantic scrap than his team-mate, eventually making up five places to finish 11th and earn some vital extra championship points for Honda.

Cammish now heads to the next rounds at Silverstone on 29th September with the most podium finishes in the field. More significantly while still holding third place in the championship, he is just nine points back from leader Turkington and a single point behind Jordan. With more than 120 points available from the six races left in the 2019 BTCC, the Honda team is firmly in the title chase. 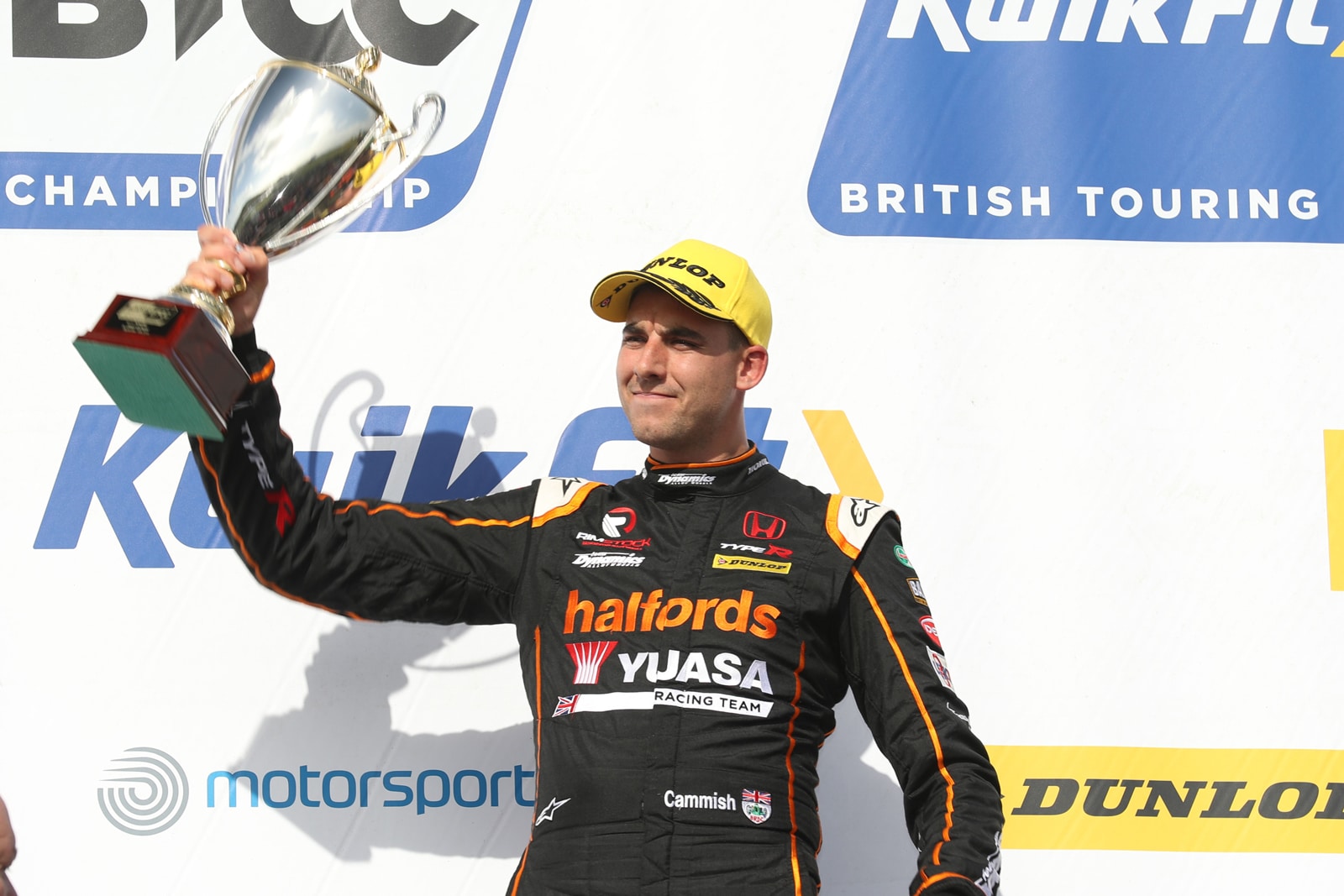 A very positive weekend – if you had told me we were going to come to Knockhill and cut the point deficit to our rivals by two thirds I wouldn’t have believed you.
Qualifying second with the success weight we were carrying showed the performance we had. It was the right decision to use the medium tyre in race one and taking second in race two set us up for a strong finish. And our rivals losing points was the icing on the cake.
Silverstone is a power circuit and we have the performance. Hopefully we can go there and do a good job. 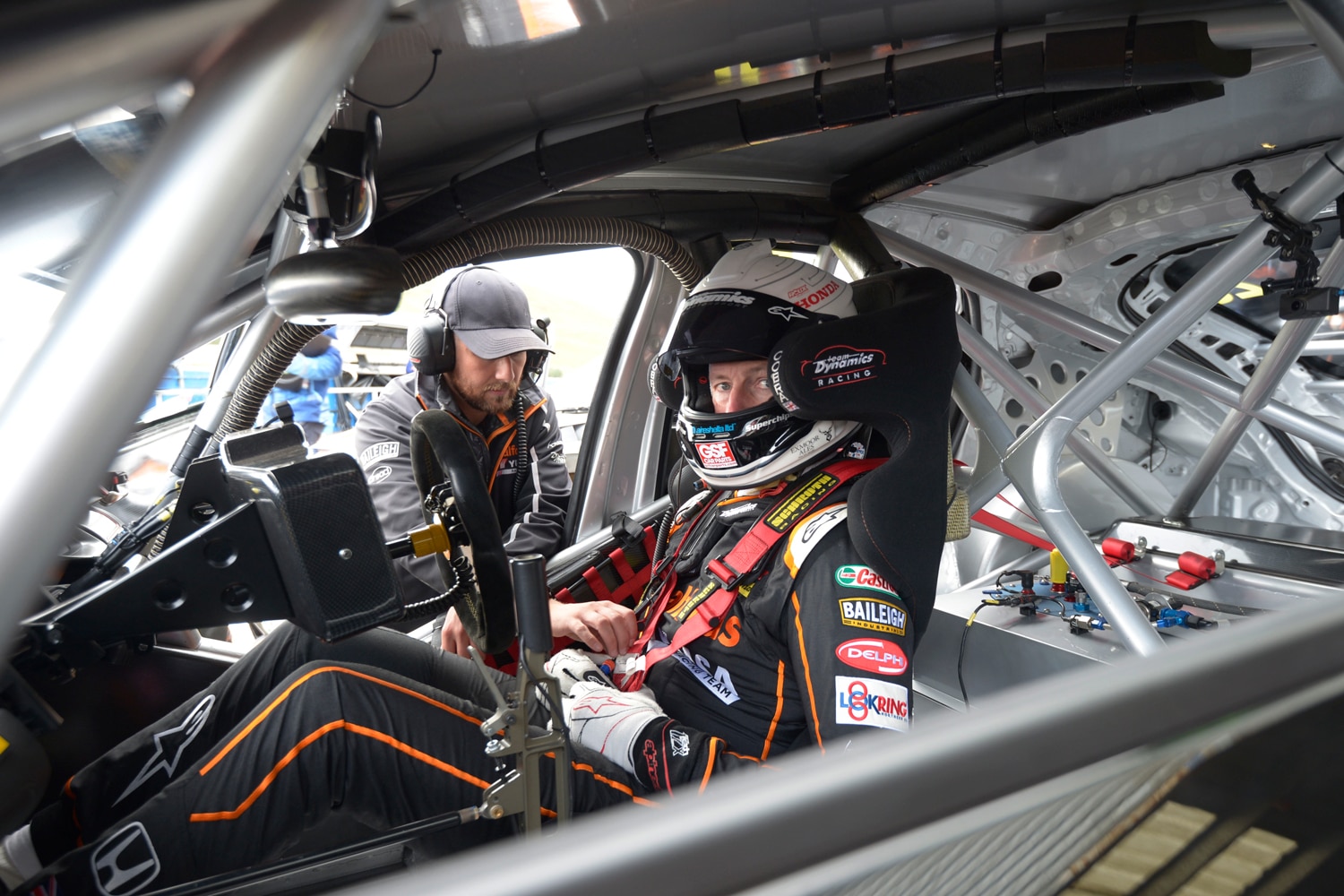 The weekend was disappointing for me but very good for Dan and for the team. We thought this would be the difficult track for us so to close the points gap was really positive.
We think we can do a good job at Silverstone and Brands. And of course our rivals have two team-mates battling for the championship, we can focus on one and that makes a big difference.