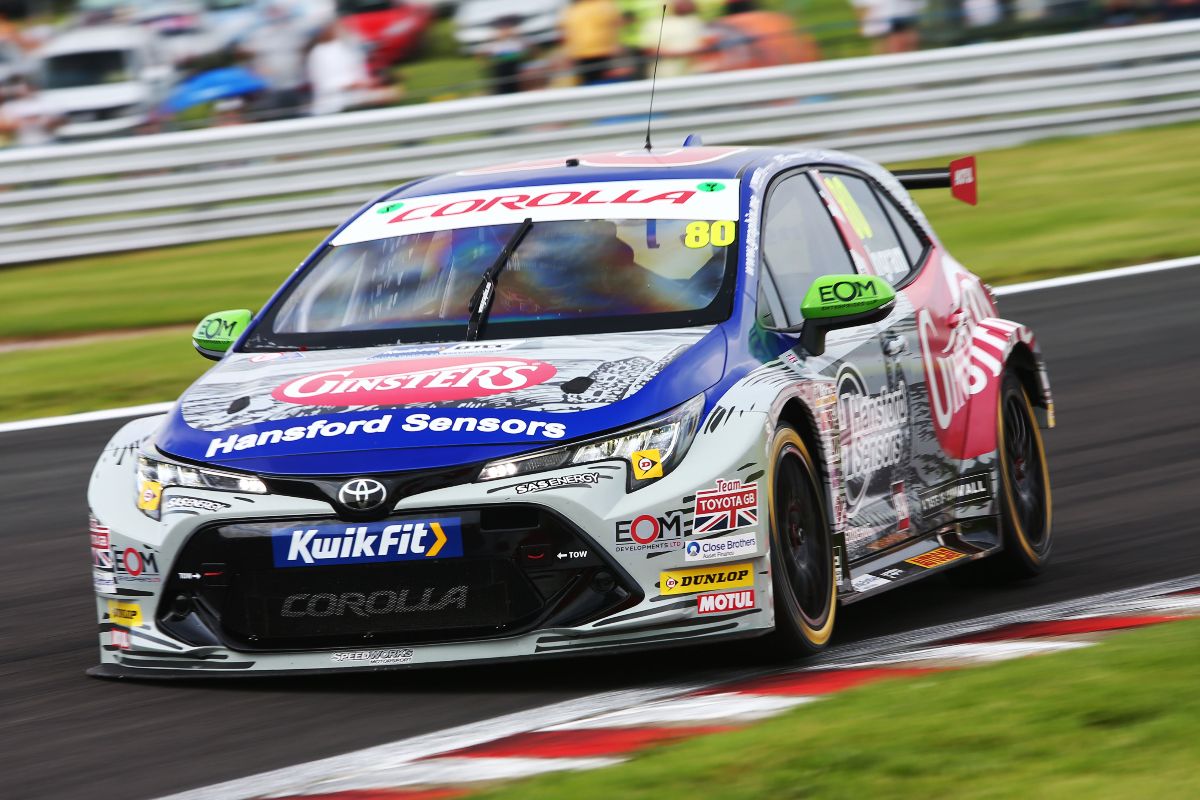 Tom Ingram looked odds-on for a podium finish if not better in the final race of the British Touring Car Championship’s visit to Oulton Park last weekend (29/30 June), only for misfortune to strike at the end of arguably the most competitive outing to-date for the new Team Toyota GB with Ginsters Corolla.

Oulton Park is home soil for Northwich, Cheshire-based Speedworks Motorsport, and Ingram headed into qualifying in optimistic mood following two busy and productive free practice sessions. A couple of grassy excursions restricted him to ninth on the grid amongst the 30 high-calibre contenders, but he did not let that hold him back.

Under a sweltering summer sun and in front of both a capacity crowd and the live ITV4 television cameras, the 25-year-old Bucks-born ace went immediately on the attack on race day, pinching a position from double title-holder Jason Plato on the opening lap of the curtain-raiser before gaining another spot when Matt Neal went off. He subsequently had to get his elbows out to fend off Plato and 2017 champion Ash Sutton in a scrap that got physical on occasion on his way to a strong seventh at the chequered flag.

In race two, Ingram again focussed on moving forward, snatching sixth from Rory Butcher before – headlights ablaze – zeroing in on Sam Tordoff in fifth. Relentlessly stalking his prey, he had closed right onto the Yorkshireman’s tail when the safety car was summoned with less than a handful of laps left to run.

At the re-start, a big ‘moment’ at Knickerbrook cost him some ground – sliding spectacularly sideways after pushing a touch too hard and dropping a wheel over the kerb – but eighth position nonetheless secured the reigning two-time BTCC Independents’ champion fourth on the partially reversed grid for the day’s finale.

When the lights went out, the leading quintet broke swiftly away from the chasing pack, but then going onto lap three, disaster struck as contact between the top two spat Neal broadside across the track heading down The Avenue towards Cascades. In the ensuing cloud of tyre smoke, Ingram – like several others – had to jink dramatically left onto the grass in avoidance.

Rejoining in 22nd place and carrying damage, he later locked up on a pool of oil at the hairpin and skidded straight on, ultimately spelling retirement. Frustratingly, the second-fastest lap of the race – quicker than the eventual winner and set just before the incident – went to show what might have been.

Ingram and Team Toyota GB with Ginsters now go into the BTCC’s mid-season break sitting ninth in the Drivers’ and Manufacturers’ standings respectively in the UK’s premier motor racing series, with the action set to resume at Snetterton in Norfolk on 3/4 August.

“As our home event, we always get a lot of guests, family, friends and supporters coming along to Oulton and as ever, they all had a great time. On the track, we went into the weekend knowing we had a long job list we wanted to try out on the Corolla, which resulted in a lot of learning again and some significant progress.

“Whilst we could probably have been a little further up the grid in qualifying, it didn’t stop Tom from fighting his way through the field at a circuit where overtaking is notoriously difficult. We took a big stride forward following race one, and after looking so strong in race two, we were pretty bullish about our prospects from the second row of the grid in race three.

“It was a huge shame that we were robbed of a fair crack at it through no fault of our own, because we clearly had the pace to be on the podium – perhaps even more – but now, it’s time to go back to base and digest all the work we’ve done over the past few months. The plan for the next five weeks is to keep our heads down and keep pushing, and once we completely nail the sweet spot with the new Corolla, I genuinely think we will be competitive everywhere.”

“Oulton Park and I have a bit of a love-hate relationship. I love the place, but it really doesn’t seem to like me very much as something has always stopped me from coming away with results there. We weren’t quite ‘in the window’ in qualifying, and I probably forced it a bit too much and ended up overdriving – with a new car, you occasionally have to overstretch the boundaries to find the limit.

“In terms of race pace, though, the Corolla was the strongest it has been yet this season – I felt I could really push and attack. That marked the biggest step forward of the year so far, and the car got better and better as the weekend went on.

“We gained ground in race one, before making a big set-up change for race two that really brought the Corolla to life. I was very much looking forward to race three after that, and – considering the pace we had in just the opening two laps – I’m convinced we would have been on the podium. When it all kicked off, Matt crossed the track right in front of me and my only option was to veer left onto the grass, but the wheels dug in and that ripped a load of front downforce off the car.

“We eventually got going again but later hit oil and flat-spotted a tyre, which meant we had to pit and with the damage we were carrying, we reluctantly had to call it a day. That was obviously a disappointing way to finish the weekend, but overall, there was plenty of cause for encouragement and we will use that to continue to fuel development of the Corolla to make sure we come back fighting fit at Snetterton after the break.”