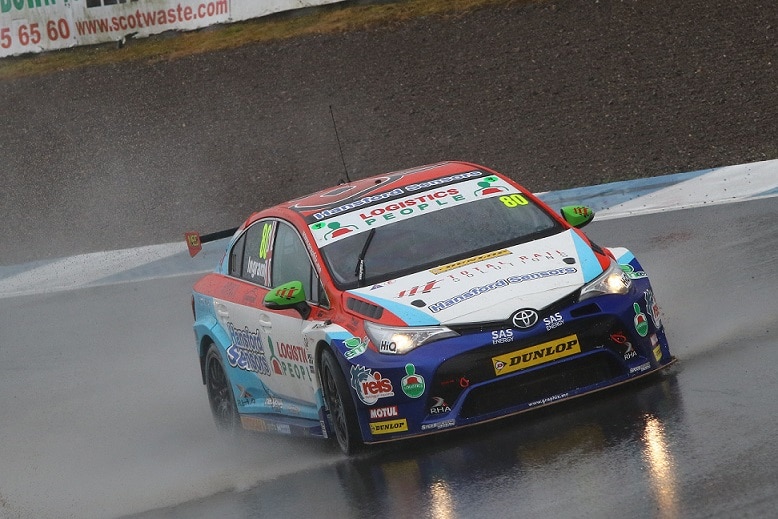 Tom Ingram has promised to ‘fight to the end’ in the chase for the 2018 Dunlop MSA British Touring Car Championship crown, after what looked set to be a big points-scoring weekend north of the border at Knockhill (25/26 August) was undone by a dose of ill-fortune.

Knockhill is widely acknowledged to be a track that favours rear wheel-drive machinery, but Ingram has always excelled around the undulating Fife circuit. Despite having to carry 66kg of success ballast into qualifying by dint of sitting second in the title standings, he duly tore up the formbook to put Speedworks Motorsport’s front wheel-drive Toyota Avensis a strong sixth on the starting grid amongst the 31 high-calibre contenders – some of the very best touring car protagonists on the planet in what is commonly regarded as the world’s premier and most fiercely-disputed tin-top series.

That placed the talented young Bucks ace directly between chief rivals Colin Turkington and Ash Sutton – both of whom compete in rear wheel-drive cars – and a series of ultra-consistent lap times augured well for race day, when Saturday’s sunny skies made way for heavy rain, prompting a wholesale set-up change and laying the foundations for a journey into the unknown.

After toughing it out wheel-to-wheel with the fast-starting Sutton through the first few corners of race one, Ingram pulled off a bold move on the BTCC’s newest winner Chris Smiley at one-third distance and remained in the podium scrap throughout, going on to take the chequered flag in the same position as he had started. Yielding a solid clutch of points, the result also represented the 25-year-old’s sixth Independents’ triumph of the season and increased his advantage in that particular battle.

Race two was punctuated by safety car interventions for multiple accidents further down the order, ultimately being halted seven laps early due to the deteriorating conditions. In the ten laps of action that did take place, however, Ingram unleashed a scintillating turn-of-speed to scythe his way sensationally past Josh Cook, qualifying pace-setter Dan Cammish, championship leader Turkington and 2013 champion Andrew Jordan to brilliantly seal the runner-up spoils and another Independents’ victory in front of the appreciative trackside crowds and live ITV4 television cameras.

Unfortunately, slight damage picked up along the way – an inevitable by-product of competing in the cut-and-thrust, no-holds-barred BTCC – pushed the Toyota’s front splitter down towards the ground. The knock-on effect was that the reigning Independents’ Champion – in company with race-winner Sutton – was excluded for failing the subsequent ride-height check, with the added penalty of demoting the pair to the rear of the grid for the day’s finale while still having to carry their success ballast.

Despite finding himself delayed by a couple of other drivers’ incidents, Ingram dug deep and fought grittily through the field to cross the finish line 16th – agonisingly, just shy of the points-paying positions in a race devoid of much of the earlier drama. Matching the leaders for outright pace – even with the additional 66kg to contend with – served to show what might have been.

The two non-scores mean the three-time Ginetta Champion and former British Karting Champion has slipped to 43 points adrift of Turkington at the summit of the overall Drivers’ standings – albeit still in second place – but he continues to lead the way in the defence of his hard-earned Independents’ Trophy. Speedworks similarly remain atop the Independent Teams’ table, while occupying sixth spot in the Teams’ classification outright with just Silverstone (15/16 September) and Brands Hatch GP (29/30 September) left to run.

“Rules are rules and we obviously have to accept what happened, but it’s immensely frustrating to lose so many points for such a minor infringement that didn’t affect the performance of the car in any respect,” reflected the Northwich, Cheshire-based outfit’s Team Principal, Christian Dick. “After that, progress was always going to be difficult in race three with 66kg from the back of the grid, but Tom did everything he could with another fantastic drive and deserved a lot more than he got out of the weekend.

“It’s important to focus on the positives, though, and there are a great many to take away with us. We thought we would struggle even to crack the top 15 in qualifying at Knockhill, so to line up sixth and then really take the fight to the rear wheel-drive boys in races one and two massively exceeded expectations.

“The Avensis’ pace in race two was mega, and whilst it’s very easy to be over-cautious in conditions like that, Tom pulled off a number of really eye-catching moves that were just brilliant to watch. If the race had run to its full-distance, I think we could probably have put some pressure on Sutton, too.

“That gives us a lot of encouragement going forward, particularly with both Silverstone and Brands Hatch having historically been strong circuits for us that have yielded good results. We were heavy going to Silverstone last year, yet Tom came within a mere 0.001s of taking pole position and ultimately, in spite of the disappointment, he’s still second in the Drivers’ championship. Admittedly, Colin now has a significantly extended lead, but there are six races to go and 134 points to play for. We’re not giving up and going home – not by a long shot.”

“I think you’d have to classify that as a real missed opportunity of a weekend,” added KX Akademy graduate and MSA Academy member Ingram. “Knockhill was always going to be about damage limitation for us and we feared we might struggle a bit, but it’s fair to say we surprised ourselves in terms of our performance.

“The pace was phenomenal considering the weight we were carrying and the fact it’s a rear wheel-drive circuit. I was well-pleased with sixth place in qualifying and race one, and then when we took some of the ballast out of the car for race two, the Avensis came alive and I had a lot of fun coming through the pack. It was difficult to settle into a rhythm with the constant safety car interventions, but every time I got up behind somebody I was able to attack pretty much straightaway and it was hugely disappointing for the result to later be taken away from us.

“In race three, we were never going to be able to carve through the field like we did at Snetterton and Rockingham, and to wind up literally one position outside of the points when we clearly had the speed to finish much higher up kind of summarised our day.

“We’ve lost touch a little in the championship, but the final couple of tracks should suit the Toyota well. We’ve won at Silverstone in each of the last two seasons and gone well at Brands GP too, so we’ll go there in confident mood and fully focussed on clawing back the ground we’ve conceded. We’re still holding our heads high and still in the fight – and we will keep fighting right to the end. From here on in, there can be no other strategy than maximum attack.”