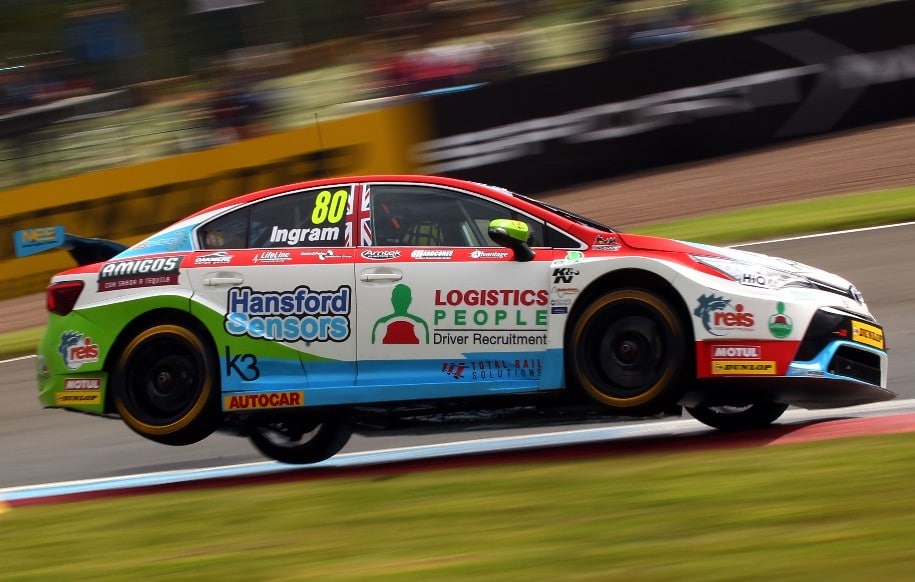 Tom Ingram reignited his bid for the Dunlop MSA British Touring Car Championship crown with his third outright victory of 2017 at Knockhill last weekend (12/13 August), hailing an ‘awesome effort’ from Speedworks Motorsport as he stormed away from his pursuers in the quest for Independents’ glory.

Although a self-confessed fan of Knockhill’s rapid rollercoaster ride, Ingram travelled north of the border with some apprehension, given that the tight-and-twisty, undulating Fife circuit has traditionally tended to favour short-wheelbase, rear wheel-drive cars – everything that Speedworks’ Toyota Avensis is not.

Ingram pulled an excellent lap out of the bag in a wet-but-drying, red flag-punctuated qualifying session. A late flyer secured him fifth on the grid amongst the 32 contenders – some of the finest touring car protagonists on the planet – as he set the front wheel-drive standard in Scotland for the second year in a row in what is commonly regarded as the world’s premier and most fiercely-disputed tin-top series.

Fending off James Cole’s palpably faster Subaru Levorg for the opening half of race one, Ingram proceeded to take the chequered flag a strong sixth, winding up well clear of the next-best front wheel-drive entrant to clinch his sixth Independents’ Trophy win of the campaign.

The 23-year-old subsequently survived a tag from Senna Proctor at the start of race two that sent him fishtailing down the straight, before carnage just behind brought out the red flags. Once the action resumed, Ingram conceded ground to home favourites Gordon Shedden and Dave Newsham, but a dogged defence against three-time champion Matt Neal yielded eighth position.

Fired-up to put on a show for the live ITV4 television cameras, he wasted little time in scything his way into the lead, and by one-quarter distance, he was already almost five seconds ahead of his nearest challenger. Rather than falling back into his Honda rival’s clutches, however, he continued to increase that advantage, posting fastest lap after fastest lap in a metronomically consistent display.

A staggering nine seconds in front – an eternity in touring car terms – when the safety car was deployed on lap 17 for a stranded car further down the order, instantly reducing his imperious margin to next to nothing.

After sprinting clear again at the re-start, the race was neutralised once more just four laps later, but the three-time Ginetta Champion and former British Karting Champion held his nerve and his reward was a magnificent third triumph of the season.

The maximum score strengthened Ingram’s grasp on fifth place in the overall Drivers’ standings and enabled him to extend his Independents’ Trophy lead from 15 points to 47. Speedworks similarly consolidated its hold on fourth position in the Teams’ table, while reclaiming the top spot in the Independent Teams’ classification.

“What a cracking result,” enthused the Northwich, Cheshire-based outfit’s Team Principal Christian Dick. “Not only that, but for it to have come at one of the circuits we would have least expected just goes to show that we have turned this Avensis into a true all-rounder.

This win gives everybody in the team a real boost after working so hard to fight back from our mid-season malaise. Following the rough weekends at Oulton Park and Croft, to respond in such emphatic fashion proved that our early success in 2017 was far from a flash in the pan.”

“With the remaining three circuits all likely to play to the Avensis’ strengths, we will be pushing as hard as we possibly can to close that gap. It really is game on from here.”

Ingram echoed the sentiments, and added, “Huge credit to everybody at Speedworks – they did me proud and put one hell of a car underneath me. My engineer Geoff was superb on the radio – he let me know everything that was going on, which made my life so much easier – and I cannot thank him, the team and all of our amazing sponsors enough for an awesome effort.”

For more information on our partners including Tom Ingram and Speedworks Motorsport, please click here.