Ingram rounds off BTCC season in style at Brands Hatch 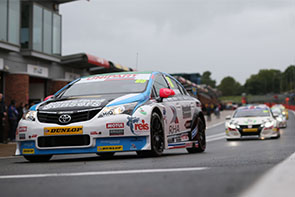 British Touring Car ace Tom Ingram overcame a post qualifying setback to net three impressive results at the final round of this year’s series at Brands Hatch. Starting from the back of the grid for race one, Ingram took the Speedworks Motorsport Toyota Avensis through the pack during all three races to end the season in tenth spot in the BTCC standings.

Ingram is no stranger to the Brands Hatch circuit after taking his maiden BTCC win here at the opening race of the season. This time, the circuit would be another 1.2 miles longer as retuning for the final round of the season some 27 races later, the Grand Prix Circuit offered an extra loop for drivers to get stuck into.

The unpredictable British weather was once again the biggest debate in the pit lane during Free Practice 1, with a messy session causing some surprising names towards the top of the time sheets as the track dried then became wet again.  Ingram secured fifth fastest during the opening session which was followed by third quickest during a considerably wetter Free Practice 2. Qualifying is where Ingram has shone all year and Brands has been kind to the Avensis driver. He topped the time sheets for much of the session after recording a solid quick lap before the rain came but, was edged out towards the end when it began to dry after a lengthy red flag. A flying final lap launched him back into 2nd place as the flag dropped on the session and a potential front row slot for the opening race on Sunday. Sadly, the Toyota failed a ride height check and the penalty from series bosses TOCA would see Ingram start from the back.

Electing to use his soft tyre choice for the opener, Ingram would need to manage tyre wear throughout the 15 laps of the Kent circuit if he was to make inroads on the field ahead. By the time the first safety car was deployed in lap three, Ingram had vaulted from 31st to 20th with some impeccable driving from the High Wycombe man. By lap 10, he had almost halved his positon to 16th and was determined to bag some points for his championship position. As the chequered flag dropped, Ingram had made it into 14th and would start race two with the same format in mind. With no ballast and the more suitable tyre on the Avensis, Ingram started race two as he left race one and duly slotted into 12th by the time the field had completed the first trip around the circuit. Another safety car on lap seven bunched the field but Ingram was not content on staying in the eleventh place he had obtained by that point. And to prove it, Ingram snatched tenth on lap ten to head towards the reverse grid draw places. Holding off a strong challenge from behind, the Speedworks Toyota made up one more place in the closing laps to take an impressive 9th place.

15kg of ballast would be a small hindrance for race three and Ingram was unlucky with the reverse grid draw, staying ninth for the final round of the 2016 British Touring Car Championship. By now, the Independence Trophy was out of reach and Ingram was purely out to make up places. In a repeat of the first two races of the day, Ingram stormed into 8th by lap two and was soon hunting down 7th when yet another safety car bunched the field. With just eight laps remaining Ingram pounced and took 6th spot in what was a messy tussle for the top five positions. Pulling out a margin on the following pack, Ingram took the chequered flag in sixth, adding to his overall points tally, ending the season in tenth.