Ingram soars into championship lead on stellar weekend for Speedworks 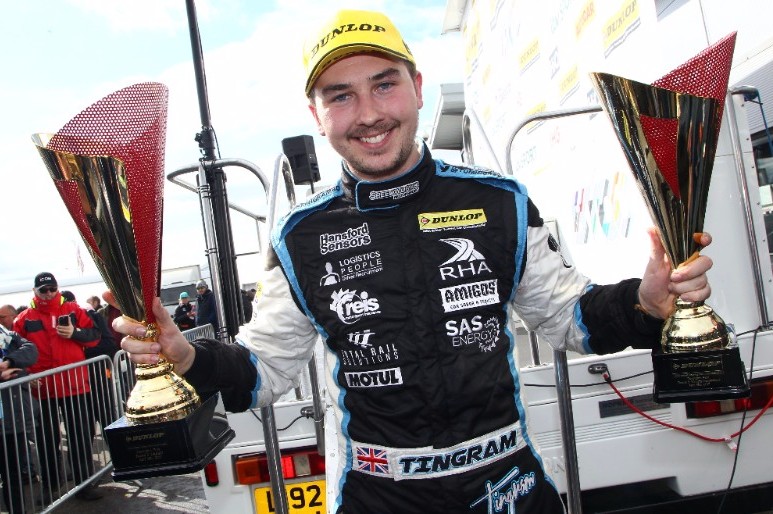 Reis Motorsport Insurance support Tom Ingram as he once again wins to jump to top of the BTCC table.

Tom Ingram has leapfrogged into the lead of the Dunlop MSA British Touring Car Championship after a superb weekend at Donington Park (15/16 April), as he and Speedworks Motorsport secured their second victory of 2017 in emphatic fashion with a commanding performance.

Ingram headed to Donington – where he had set the benchmark pace in the only official pre-season test a month earlier – carrying 66kg of success ballast aboard his Toyota Avensis following his curtain-raising triumph at Brands Hatch. That, however, did not hold him back in free practice as the talented young Bucks ace lapped comfortably inside the top four in both sessions amongst the 32 high-calibre contenders – some of the finest touring car protagonists on the planet.

He maintained that impressive form in qualifying to line up an excellent third on the starting grid for race one, driving on the absolute ragged edge of adhesion and underscoring just how much he was pushing with a wild trip across the gravel.

As one of only two drivers in the field on the harder-compound Dunlop rubber in the opener, Ingram stormed into the lead as the lights went out and artfully controlled a cold tyre slide through the Craner Curves to sprint almost a second clear by the end of the first lap.

Ultimately, the extra weight was always going to tell as the race progressed, and after grittily remaining in charge for the first four tours, the three-time Ginetta Champion and former British Karting Champion inevitably found himself forced to yield to several lighter rivals. He subsequently produced a defensive masterclass to heroically stave off intense pressure from reigning champion Gordon Shedden, Adam Morgan and Rob Collard to snare fifth at the chequered flag.

With 27kg removed from his Avensis for race two in the immensely popular, ITV4 live-televised BTCC – commonly regarded as the world’s premier and most fiercely-disputed tin-top series – Ingram made short work of scything his way past Matt Neal, Rob Austin, Colin Turkington and Collard before relieving Aiden Moffat of the top spot with a perfectly-judged move down the Craner Curves on lap four. Immediately scampering clear, the 23-year-old stretched his advantage to almost four seconds at the flag as his success made him the BTCC’s first multiple winner of the season and vaulted him to the summit of the Drivers’ standings.

The heavens then opened ahead of the day’s finale, severely reducing grip levels and sending countless cars – the #80 Toyota amongst them – aquaplaning off-track left, right and centre. The red flags unsurprisingly flew, prompting a re-start once the rain had abated. Despite grappling with maximum ballast, Ingram maturely mastered the spray and low setting sun to tally another top five finish from eighth on the grid, barely a second adrift of the rostrum.

That means the KX Akademy graduate and MSA Academy member will next travel to Thruxton – scene of his maiden car racing podium and win and a second career BTCC pole position last year – 14 points ahead of his closest adversary in the chase for the coveted crown and similarly atop the Independents’ Trophy classification.