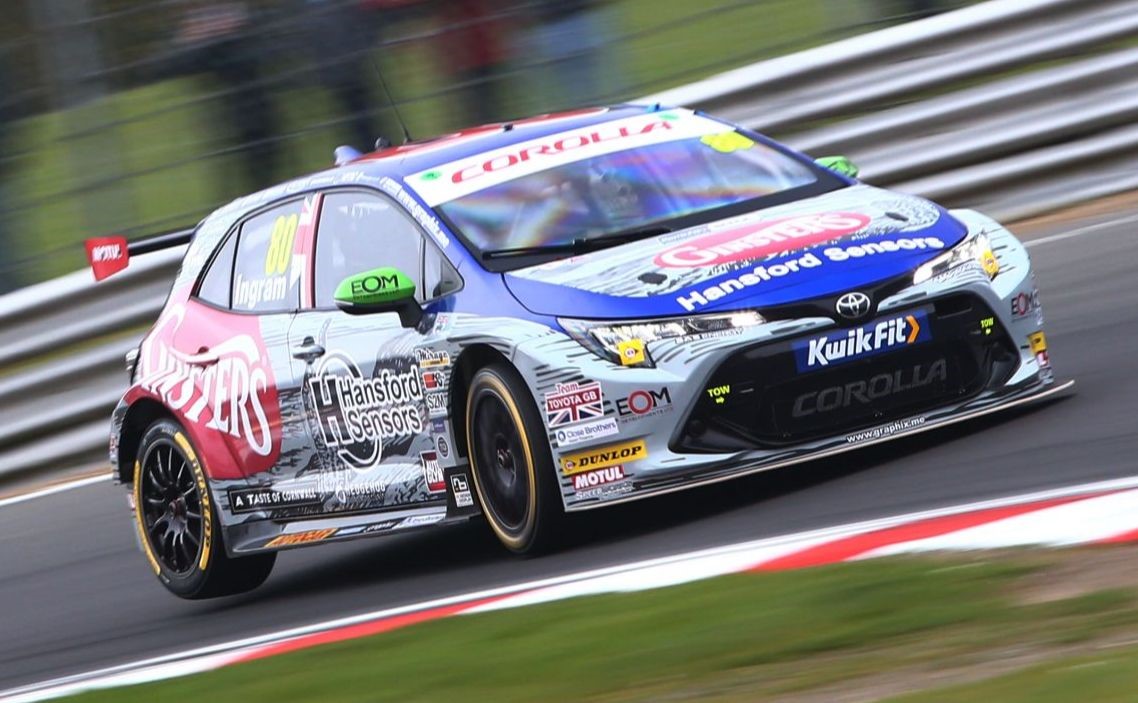 Tom Ingram piloted his all-new Toyota Corolla to a hat-trick of points-scoring finishes on its British Touring Car Championship debut at Brands Hatch last weekend (6/7 April), as Team Toyota GB with Ginsters proved it will be a potent force in the UK’s premier motor racing series in 2019.

Buoyed by a productive pre-season testing programme, Ingram arrived at Brands Hatch’s short Indy circuit eager to see where he and Team Toyota GB with Ginsters stood in the BTCC pecking order with the new Corolla, built and prepared over the winter by Northwich, Cheshire-based Speedworks Motorsport.

A top ten protagonist throughout free practice, the Bucks-born ace went on to qualify eighth amongst the 30 high-calibre contenders, on a damp track and with a succession of red flags repeatedly interrupting his rhythm. The fact that the leading 18 drivers were blanketed by barely a second offered some indication as to the fierce nature of the competition.

With the rain returning the following day, Ingram plumped for wet tyres for race one – in company with the majority of the sharp end of the grid – and he mastered his first-ever start in the Corolla to hold position at lights-out on a greasy circuit. As the track dried, however, he found himself defenceless against the slick-shod runners, who increasingly and inevitably scythed their way through. Falling almost to the foot of the top 20 at one stage, he grittily fought back to salvage 13th at the chequered flag.

In race two, the reigning two-time BTCC Independent Drivers’ Champion immediately gained ground as he battled his way into the top ten by lap five – all the while judiciously conserving his tyres in preparation for a late charge. In front of the live ITV4 television cameras and tens of thousands of appreciative spectators, Ingram then rapidly closed down the gaps ahead as the #80 Corolla proved to be consistently the fastest car on the track over the second half of the race. Latching onto the tail of the second-placed battle, he flashed across the finish line in fifth position, less than 0.3s adrift of the runner-up laurels.

That left the 25-year-old seventh on the reversed grid for the day’s finale, carrying 30kg of success ballast and on the soft-compound tyres. After pulling off a series of eye-catching moves to advance to fourth early on, the combination of the extra weight – another ‘first’ for the new Corolla – and less-favourable rubber gradually took its toll, obliging him to switch to a rearguard action as he came under immense pressure from behind.

Ingram valiantly held off a marauding pack of five rivals in the closing stages to grittily cling on to a second consecutive top ten finish, meaning he heads next to Donington Park on 27/28 April occupying tenth spot in the Drivers’ standings, with Team Toyota GB with Ginsters 12th in the Teams’ table.

“I think you would classify that as a solid start to the season. Sunday provided us with pretty much the worst conditions you could ask for when you’re trying to get to grips with a new car, but we nevertheless managed to score points in all three races.

“We had to play it safe in race one and go with the majority of people we would like to think we will be fighting for the championship later in the year, and Tom drove really intelligently. When it became clear that the track was drying and that the wets were going to go off, he focussed on looking after his tyres so that when other drivers began to fall back later on, he was still in reasonable shape – amidst all the headlines from that race, I thought that was a really underrated performance.

“He bided his time again in race two before pushing on and making up ground. His pace was mega over the second half and the Corolla looked very strong – really hooked-up. To finish barely a quarter-of-a-second shy of the podium was a great result.

“Race three was always going to be difficult with some ballast on-board and the soft tyres. It was too cold for them to perform at their peak, and they dropped off very quickly – a pattern we saw with every car on the grid throughout the day. In the circumstances, Tom produced an excellent defensive drive to secure another top ten finish and put more valuable points on the board. We learnt a lot and came away with plenty of data to go through, and we will take a further step forward at Donington Park.”

“Overall, that was a positive first weekend. With no prior wet testing behind us, we qualified inside the top ten in tricky mixed conditions, scored points in all three races and had the quickest car on the track over the second half of race two. Considering the Corolla is brand new, I think we’re in a fairly good position. Yes, we still have work to do and we know where we need to improve, but we always said the first half of this season – if not longer – would be spent learning, understanding, developing and fine-tuning.

“With the weather being so changeable in qualifying, it was difficult to find a set-up we were completely happy with, so it was a leap into the unknown in many ways and I think we had to be pleased with eighth on the grid. We adopted a ‘safety in numbers’ tactic regarding tyre choice for race one, and whilst we made the wrong call, we were far from alone. It soon became apparent it was going to be a matter of damage limitation, so to come away with some points was a pretty decent result.

“The pace was very encouraging in race two – the Corolla felt good and responded to everything I wanted it to do. I looked after the tyres early on before going on the attack, and with another lap or two I’m pretty confident we’d have made the podium.

“I then had to get my elbows out a bit in race three with the double handicap of soft tyres and success ballast. I could feel them all breathing down my neck, but there was no way I was giving up without a fight and it was satisfying to sign off the weekend with another top ten finish.”

Stay up to date on all the BTCC action by following our Facebook and Twitter pages. You can also find out more information about our partners here.