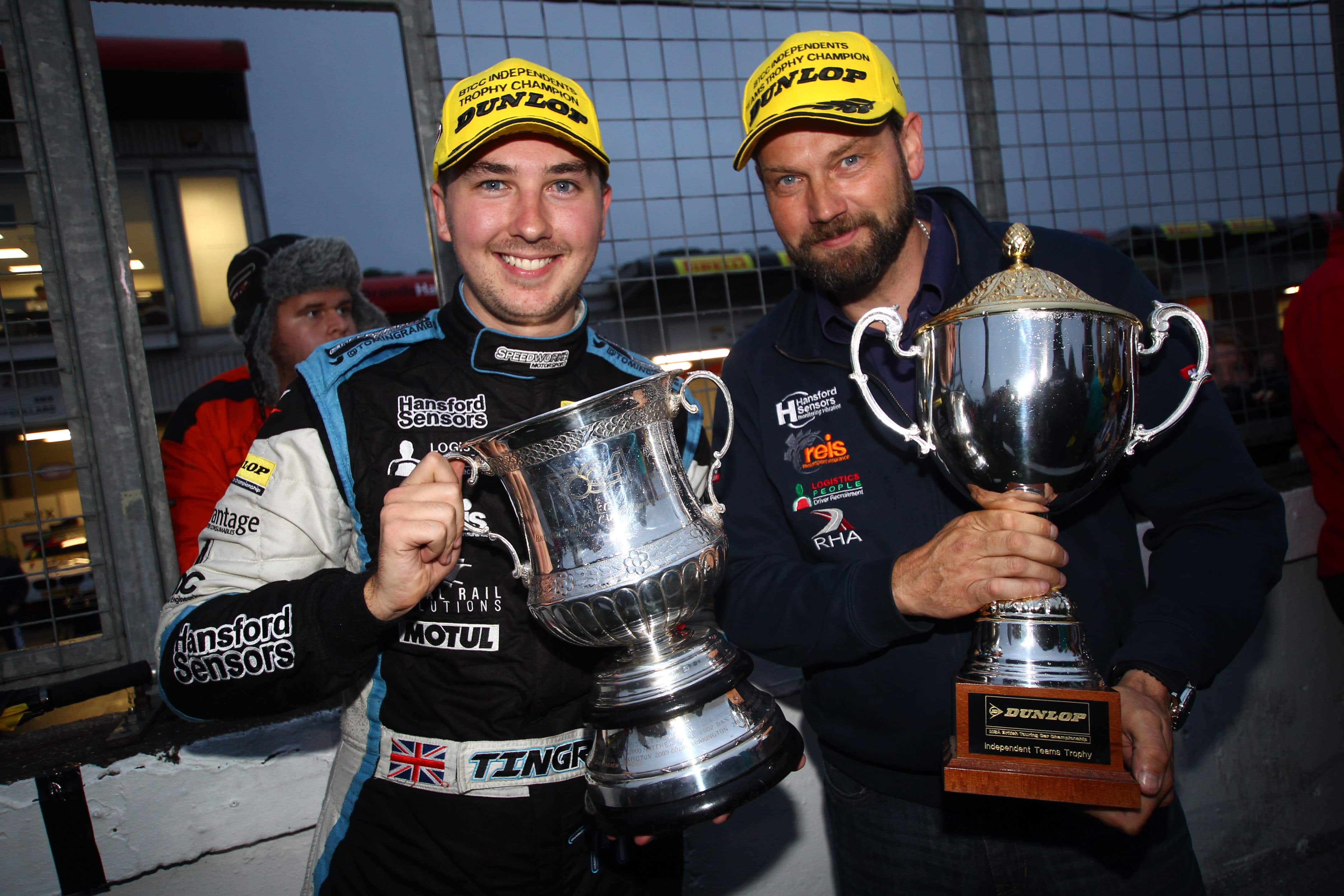 Ingram and Speedworks travelled to the legendary Kent venue – home to Formula 1’s British Grand Prix on no fewer than 12 occasions between 1964 and 1986 – sitting atop their respective tables, with the three-time Ginetta Champion and former British Karting Champion also just a single point adrift of defending title-holder Gordon Shedden for third place in the main BTCC Drivers’ classification.

After overcoming early clutch dramas – and with the Speedworks mechanics performing minor miracles to take the engine out and reinstall it in under an hour – Ingram lapped fifth-fastest in both free practice sessions behind the wheel of the #80 Toyota Avensis.

He went on to briefly top the timesheets on a damp track in qualifying amongst the 30 high-calibre contenders – some of the very best touring car protagonists on the planet – but after grappling with balance issues, he was frustrated to ultimately end up down in seventh, all the more so as he was scarcely four hundredths shy of the second row.

To compound matters, it was his chief rival for Independents’ honours – Jack Goff – on pole position, but the MSA Academy member was determined to turn the tables on race day as the weather threw a curve ball. When the lights went out in the curtain-raiser, Ingram made a superb start to gain two places away from the grid, before a mistake from Goff that also delayed Rob Austin elevated him to third.

As the top three pulled well clear of the chasing pack, the 24-year-old snatched second place from champion-elect Ash Sutton and went on to hound Aiden Moffat for the lead. Belying the 48kg of success ballast aboard his Toyota, he revelled in the low-grip, greasy conditions and flashed across the finish line barely a third-of-a-second in arrears to seal the runner-up spoils.

Ingram initially challenged for the top spot once more in race two before the extra weight for his earlier podium finish increasingly told. Forced to settle for sixth at the chequered flag, the result was nonetheless sufficient to secure the Independent Drivers’ crown – while bringing Speedworks to within touching distance of Independent Teams’ glory, too.

With still just one point separating him from Shedden in the overall rankings, he knew his main goal for race three was to stay ahead of the Scot. In fading light and with the rain having returned, Ingram vaulted up to third at the start with his Honda adversary slipping to 11th, but a coming-together with Mat Jackson on lap two dropped the Speedworks star to sixth as Shedden profited from the mêlée to rise to seventh.

A subsequent safety car intervention allowed the Honda to latch right onto the tail of the Toyota, but Ingram wasted little time in deposing Shedden’s team-mate Matt Neal to move into fifth, before grittily finding a way past Michael Epps for fourth with four laps remaining – thereafter sprinting clear to cap a sensational season with yet another cause for celebration and another objective fulfilled.

With a full house of Independents’ trophies, third place in the overall Drivers’ classification, fourth in the Teams’ standings, four outright victories, nine podium finishes, more laps and races led than any other competitor and the campaign’s best average qualifying record, Christian Dick acknowledged that it would take a while to fully grasp the extent of Speedworks’ achievements in 2017 in the world’s premier and most fiercely-disputed tin-top series.

“This is what we came into the BTCC to do – to win races and ultimately challenge for championships – and to take not only our first title but two at the same time is a phenomenal feat,” reflected the Northwich, Cheshire-based outfit’s Team Principal. “You really can’t underestimate just how tough this series is – it’s the best touring car championship in the world bar none, and the level at which everybody operates is extremely high. To secure a clean sweep of Independent honours, finish third overall in the Drivers’ standings and be the first front wheel-drive car in the main classification is frankly insane – a dream come true.

“We are an incredibly tight-knit, small group of people at Speedworks – little more than a handful of full-time employees – and I see day-in, day-out just how hard everybody works. I cannot tell you how proud I am of each and every one of them.

“Incredible, absolutely incredible,” echoed an emotional Ingram. “I know it’s a cliché to say it, but this really is what dreams are made of. What a season! We couldn’t have asked for very much more – to have done what we have done with the budget and resources at our disposal is mind-blowing. To win the Independent Drivers’ title was my personal target, but to do the double with the Independent Teams’ championship too is remarkable.

“We’ve learned so much and been on the pace every single weekend this year, and with the calibre of competition that exists in the BTCC, that’s pretty amazing and testament to the mega effort that everybody at Speedworks has put in – I really cannot praise them highly enough and they deserve immense credit for this success.

“It certainly wasn’t an easy weekend at Brands Hatch. The weather was a worst-case scenario situation, because there was so much unpredictability but the Avensis felt mint in race one and whilst there probably were opportunities to attack Moffat for the win, I didn’t want to risk everything when I didn’t need to with both Goff and Shedden a fair way behind me.

“We did what we had to in race two, and then we were sitting pretty in race three when all-of-a-sudden, Gordon appears in my mirrors! He started to put me under pressure, but there was no way he was going to take that place away from me. We’ve worked so hard for this all year – and now it’s ours!”