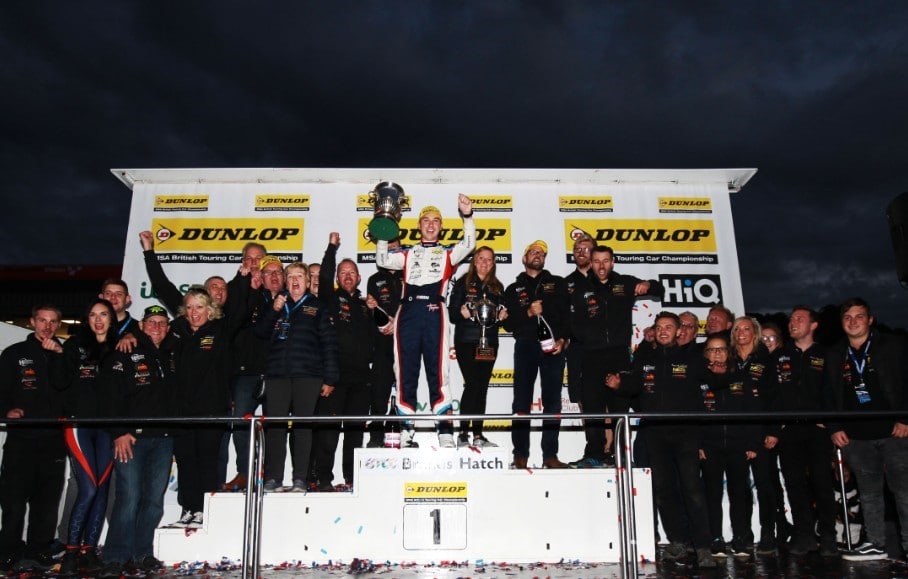 Having done the Independents’ double in 2017 – a maiden BTCC title for both driver and team – Ingram and Speedworks arrived at Brands’ legendary 2.43-mile GP Circuit fully focussed on replicating that achievement, while simultaneously chasing the top spot in the overall Drivers’ standings, in which the three-time Ginetta Champion and former British Karting Champion trailed Colin Turkington by 34 points.

Whilst such a deficit had never previously been overcome in the BTCC, that certainly did not stop Ingram and Speedworks from trying. As had been anticipated, the 66kg of success ballast aboard the #80 Toyota Avensis hurt their challenge in qualifying, restricting the KX Akademy graduate and MSA Academy member to an uncharacteristically lowly 19th on the starting grid amongst the 31 high-calibre contenders – some of the very best touring car protagonists on the planet – but he determinedly ground out a 14th-place finish in race one, less than a second outside the top ten.

The result extended the gap between Turkington and Ingram to 36 points going into race two, with only 44 remaining in play – but the Speedworks star was anything but defeated. With the weight removed and in front of the live ITV4 television cameras and tens of thousands of trackside spectators, he immediately went on the attack, gaining three spots on the opening lap, despatching his title rival with an incisive overtake into Paddock Hill Bend beginning lap two and pulling off several more ultra-committed moves as he charged up into fourth place.

There, unfortunately, his spectacular progress was stopped in its tracks by Turkington’s team-mate Andrew Jordan, who proved impossible to unseat. Only 1.3 seconds shy of victory at the chequered flag, the result agonisingly left Ingram just a single point short of taking the fight on to the last race of the season.

His eighth Independents’ triumph of the campaign nonetheless sealed that title for the second consecutive year, and from seventh on the reversed grid for the finale – his 150th start in the BTCC – the 25-year-old unleashed another gritty display. Belying the 48kg of success ballast back on-board, he was firmly in the podium battle throughout, with fifth position – again, well within sight of the race-winner – more than enough to guarantee Speedworks’ the Independent Teams’ laurels.

Ingram’s extraordinary never-say-die effort – allied to multiple title-winner Turkington failing to score in races two and three – ultimately saw him finish just 12 points adrift in the Drivers’ table, prompting BTCC boss Alan Gow to tip him to ‘be champion one day’ in what is commonly regarded as the world’s premier and most fiercely-disputed tin-top series. It was a performance that drew similarly high praise from Speedworks Team Principal Christian Dick.

“Tom has been brilliant all year,” he enthused, after the plucky Northwich, Cheshire-based outfit secured an excellent fifth spot out of 21 in the outright Teams’ Championship. “I can’t think of a single moment when he has put a foot wrong, and he has produced some sensational drives through the field – including here at Brands. Likewise, the boys have been exceptional – their work ethic is just faultless. We’re far from the biggest crew in the paddock, but we’ve definitely got the most talented and passionate bunch of guys out there and I’m incredibly proud of each and every one of them.

“We were all really excited coming to Brands Hatch to see what we could do. We knew we were very much the underdogs and that the odds were stacked against us, but we fought right to the bitter end and Tom never gave up – he threw absolutely everything at it. He might not have been in a BTCC title showdown before, but you would never have known – he was peerless under the pressure.

“The tension inevitably builds as the weekend unfolds, and it was an emotional rollercoaster ride throughout. There was understandably some disappointment after race two, but there was still a job to do in race three and we all knuckled down to get that job done.

“It’s a phenomenal achievement to win both Independents’ titles two years on the bounce, and testament to the stellar work everybody here has put in – particularly as a single-car operation. We have performed well with full ballast, no ballast and on all different compounds of tyre, which fills us with so much confidence moving forward. This season, we thought we could win the overall Drivers’ Championship; going into next season, we know we can do it.”

“Coming into 2018, we had our sights set on the outright title,” echoed Ingram, whose hat-trick of victories, nine podium finishes, five fastest laps and 171 crowd-pleasing overtakes over the course of the campaign earned him the Dunlop #ForeverForward honours.

“It was perhaps a little bit tongue-in-cheek given the might of the manufacturer-backed teams we are up against, and to put together a successful championship-winning bid in what is Britain’s toughest motorsport series is a huge challenge, but that was our goal.

“You can always look back at what could have been or should have been, but we can’t dwell and overall it has been one hell of a year for us. The Avensis has been an absolute joy to drive, and the support we have received has been nothing short of mind-blowing.

“We’ve got some amazing people here at Speedworks, and the work they all put in is truly second-to-none, both at the track and behind-the-scenes back at the factory – they’re a brilliant bunch of lads and I couldn’t ask to have a better team around me.

“We had to give it everything at Brands Hatch and we gave it 150 per cent – we couldn’t have done any more. I knew we needed one more place in race two, but my brakes and tyres were gone and there was just nothing left in the tank.

“Obviously I’m bitterly disappointed, but Colin is a great champion and has done a fantastic job so all credit to him, and we certainly didn’t go down without a fight! We had a few setbacks along the way that ultimately cost us, but they only serve to pull this small team of ours even tighter together and make us want it even more.

“Ultimately, we weren’t quite able to match Colin’s consistency this year, so that’s what we need to work on for next season but we will learn from that and come back stronger. 2018 has been incredible. Hopefully 2019 will be even better!”