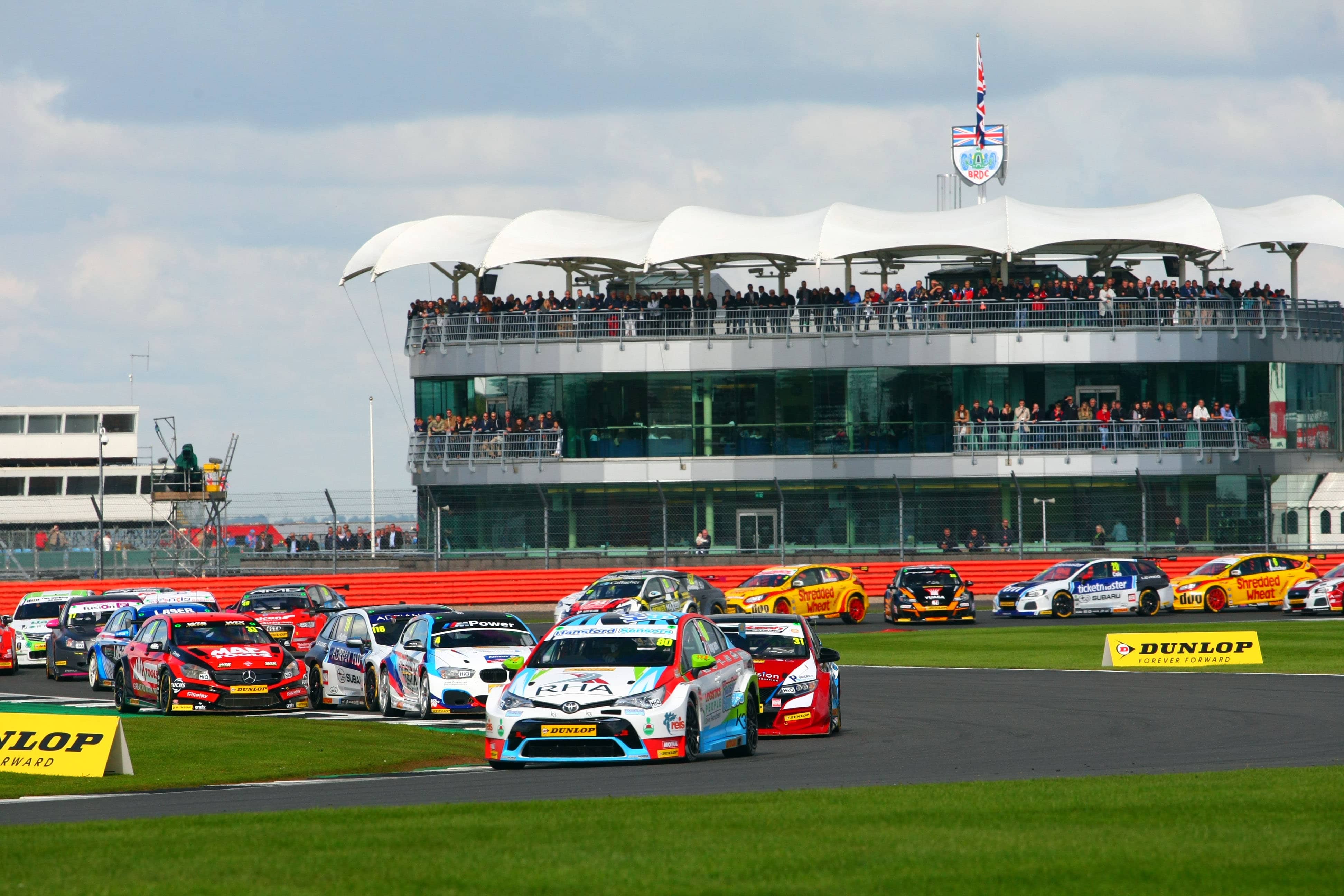 Tom Ingram will head into the 2017 Dunlop MSA British Touring Car Championship season finale still in with a mathematical chance of clinching the most coveted crown in national motorsport, following a scene-stealing performance at Silverstone last weekend (16/17 September) that saw him outscore all of his rivals with a dominant fourth victory of the campaign.

Ingram has always shone at the celebrated ‘Home of British Motor Racing’, and the Speedworks Motorsport star maintained that stellar form as he set the pace in free practice amongst the 32 high-calibre contenders. He then left it late in qualifying before pulling a lap out of the bag to vault from 15th up to a superb second, belying the 39kg of success ballast he was carrying aboard his Toyota Avensis as he missed out on pole position by the very narrowest of margins of just 0.001s.

Not to be defeated, he nailed the start in race one from the damp side of the grid to immediately snatch the lead, and after staving off an early threat from behind, Ingram’s next challenge came when the rain began to fall on lap four. As the circuit became increasingly slippery, he artfully controlled a wild slide through Copse Corner and had built up a 1.8-second advantage – with more than 15 seconds in-hand over the fourth-placed battle – when the red flags flew seven laps from the end for an accident further down the order.

It was a flawless drive that yielded Ingram’s fourth triumph of 2017 – second only to championship leader Ashley Sutton – and the sixth of his burgeoning career in the immensely popular, ITV4 live-televised BTCC, commonly regarded as the world’s premier and most fiercely-disputed tin-top series.

Race two – on the harder-compound Dunlop rubber and with the maximum 75kg of success ballast – was always going to be a tougher proposition, but the 24-year-old clung grittily onto the lead for the first couple of laps before yielding to Jack Goff’s lighter Honda.

As he increasingly – and inevitably – struggled for grip, Ingram came under intense pressure from title duellists Colin Turkington and Sutton, but a defensive masterclass enabled him to hang onto the runner-up spot for his eighth podium finish of the season.

From seventh on the reversed grid in the weekend finale – and carrying a hefty 66kg of success ballast – the three-time Ginetta Champion and erstwhile British Karting Champion put his car in all the right places around the course of a frenetic opening lap to advance to fourth, before stealing third from Adam Morgan on lap three and second from Dave Newsham a handful of tours later.

Setting off in pursuit of leader Rob Huff – one of the most experienced drivers in the field – Ingram spied his chance on lap 14 exiting Copse, only to find himself shoved aggressively onto the grass by the former FIA World Touring Car Champion, relegating him to fifth. Undeterred, he reclaimed fourth from Morgan before the chequered flag fell to complete his best BTCC points haul to-date and make him comfortably the weekend’s top scorer.

The results saw Ingram jump from fifth to fourth in the Drivers’ classification, narrowing his deficit to defending BTCC Champion Gordon Shedden in third from 38 points to just one and – against all odds – keeping him mathematically in contention for the overall title.

He also extended his advantage in the Independents’ Trophy from 24 points to 31 with just 60 remaining in play at Brands Hatch in a fortnight’s time (30 September / 1 October), with Speedworks returning to the summit of the Independent Teams’ standings and consolidating fourth spot in the Teams’ table after winning the prestigious Teams’ award for the first time.

“What a weekend!” summarised the Northwich, Cheshire-based outfit’s Team Principal Christian Dick. “Tom produced a textbook performance in race one, pushing hard to open up a gap and coping tremendously with the conditions when the rain started to fall, but his race two drive was arguably even more impressive, with maximum ballast and the hard tyres. To not only hang onto second place – but to do so with the top two drivers in the championship bearing down on him – was a magnificent effort and far exceeded our expectations.”

“We are just a small, one-car operation and yet we are going out there week-in, week-out and battling wheel-to-wheel with big-budget manufacturer entries and teams with two, three or even four cars on the grid. I genuinely could not be prouder of everybody involved. As far as I’m concerned, we have the best bunch of guys and girls in the BTCC, and we will go to Brands Hatch with the firm focus on confirming the step forward we have taken this year by fighting for both Independents’ crowns.”

“We went into the weekend knowing we only had the very slimmest of chances of remaining in the overall title reckoning, but by the same token, we also knew we would be strong at Silverstone as it’s exactly the kind of circuit that really suits the Avensis,” added Ingram.

“Going to Brands Hatch, realistically we know the overall championship isn’t going to happen but of course it’s satisfying to accomplish our pre-season objective of still being in with a shout, so we can hold our heads high. What we do have a genuine chance of is winning both Independents’ titles and pinching third in the Drivers’ table, which would be an incredible achievement in itself. We are well aware that to do so, we will need to make sure we are absolutely on top of our game – and that’s precisely what we intend to do.”

For more information on Tom Ingram and other Reis partners, please click here.