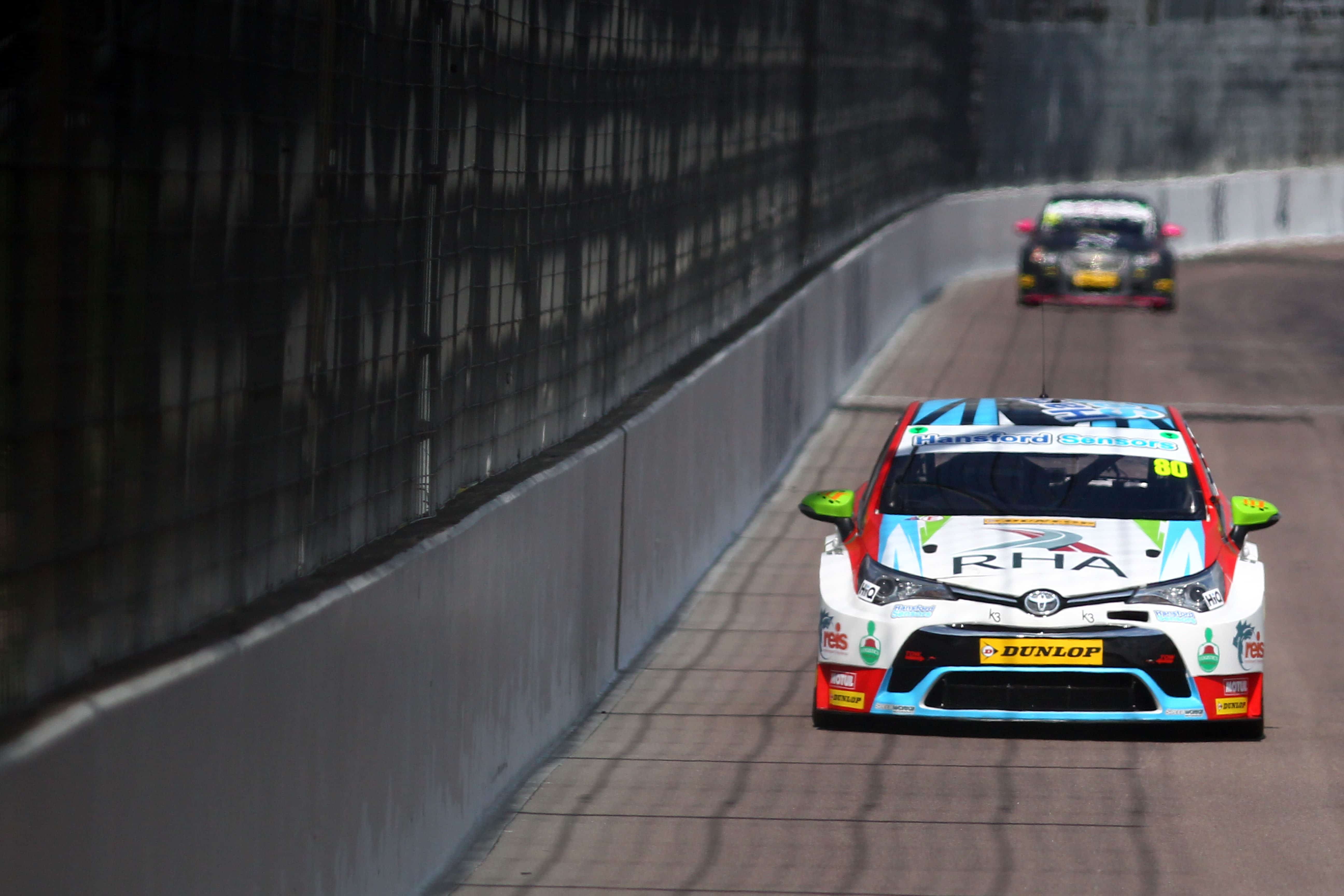 Tom Ingram overcame early misfortune in the Dunlop MSA British Touring Car Championship at Rockingham last weekend (26/27 August), producing a show-stopping charge through the field to snare a brace of top ten finishes that have consolidated his Independents’ Trophy lead.

Ingram travelled to Rockingham with happy memories of the Northants speedway – scene of his breakthrough podium two years ago. With his tail up, he duly set the pace in both free practice sessions amongst the 32 high-calibre contenders – some of the very best touring car protagonists on the planet.

Behind the wheel of Speedworks Motorsport’s #80 Toyota Avensis, the talented young ace similarly topped the timesheets for a while in qualifying before winding up a competitive third.

Fancying his chances in the curtain-raiser, Ingram was fired-up for the fight but his challenge was unfortunately curtailed before it had even begun as a split brake hose forced him into the pit-lane and out of the reckoning at the end of the formation lap – his two closest rivals for the Independents’ Trophy both scored strongly.

In front of ITV4’s live television cameras, the 24-year-old went immediately on the attack from the back of the grid in race two, advancing eight spots on the opening lap and continuing to overtake at every opportunity, frequently catching his adversaries off-guard.

Scything through the order, he was into the points by lap nine and the top ten just three tours later, before rapidly reducing the gap to the four-way scrap over sixth. On the very last lap, the three-time Ginetta Champion and former British Karting Champion completed an astonishing 23-place improvement over his starting position.

Knowing he would likely be in for a tougher time in the day’s finale on the harder Dunlop tyres, Ingram initially gained ground, dispatching championship leader Ash Sutton and two-time title-holder Colin Turkington in swift succession as he temporarily posted the race’s fastest lap. Settling into the lead battle, he subsequently found himself having to soak up intense pressure from the Northern Irishman – whose BMW was running on the quicker medium-compound rubber.

He was artfully fending Turkington off until contact directly ahead into the final chicane on lap 13 prompted avoiding action. In the ensuing confusion, the KX Akademy graduate and MSA Academy member lost out and went on to take the chequered flag in eighth position – barely a second-and-a-half adrift of fourth and the only driver on hard tyres to finish inside the top ten.

His gritty performance enabled Ingram to maintain fifth place in the overall Drivers’ standings – narrowing his margin to the top three from 49 points to 38 – as well as his advantage in the Independents’ Trophy. Speedworks remain fourth in the Teams’ classification, and sit just nine points away from the top of the Independent Teams’ table going next to Silverstone (16/17 September) – where last year, the squad celebrated its second BTCC victory and a rostrum double.

“Ultimately, Rockingham turned into a ‘could have been’ weekend,” reflected the Northwich, Cheshire-based outfit’s Team Principal Christian Dick. “After the pace we showed throughout free practice and qualifying, what happened at the start of race one was tremendously disappointing and left all of us ruing a missed opportunity, but Tom’s stunning drive in race two really lifted the boys’ spirits and put us back in the mix.”

“Race three was always going to be a tougher proposition on the hard tyres, but Tom fought well and with a little bit more luck I think we could have been on for a top five finish – he was simply in the wrong place at the wrong time when it all kicked off directly in front of him.”

“Overall, there are a lot of positives to take away with us as we turn our attentions towards Silverstone. Realistically-speaking, the overall title is now looking like a tall order considering our points deficit; whilst we certainly won’t stop pushing for that, our main focus is obviously on preserving Tom’s advantage in the Independents’ Trophy and recapturing the lead in the Independent Teams’ championship. Anything else above and beyond that will be a bonus.”