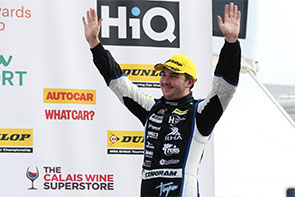 Reis Motorsport Insurance supported Tom Ingram scored his second Dunlop MSA British Touring Car Championship victory of 2016 at Silverstone last weekend. The Speedworks Motorsport driver impressed onlookers throughout the penultimate round of the series, topping off his race one win with yet another podium in race two.

The weather has played a significant part in the BTCC proceedings over the last few rounds and the Silverstone free practice sessions would be no different. No fewer than 5 minutes into the opening session of the weekend, the rain descended on the Northampton circuit meaning the first few laps of the day would ultimately set the session pace. Ingram bagged sixth early on, but elected to bring the Speedworks Avensis in early to save the car for later in the day.

No one has doubted Ingram’s pace during the Saturday sessions and he would continue to impress during the second free practice session with a time just 0.071sec away from the fastest. The plan was for more of the same in qualifying and Ingram duly delivered with another killer performance to land himself a front row spot on the grid in 2nd for the opening race on Sunday. Ingram was in a confident mood during Sunday morning’s pit walk, which was reflected in the first race as he swiftly made ground on pole sitter Ash Sutton in the MG to take the race lead during the opening lap of the day. He held firm until the MG duo of Sutton and Josh Cook played a tactical game to hoist Ingram from the front spot, relegating him to third by lap 12. Ingram duly held onto his podium spot for dear life and crossed the line with his fifth podium of the year and seventh Independent Trophy win of the year.

But his 3rd place soon became 1st as the leading two MG’s were disqualified for a technical infringement at post race scrutiny, promoting Ingram to the top step of the podium and his second race win of 2016. Starting on pole for race two was of course a surprise to Ingram. His race one success would have its disadvantages however and with 57kg of success ballast on board, he would have work hard to make it stick over the 22 laps of Silverstone National. Nevertheless, he took advantage of his soft tyre option and held on until lap seven when a charging Andrew Jordan nudged him down to 3rd. A safety car on lap 16 would not help his cause as the chasing pack were beginning to bear down on the Avensis. However, Ingram ensured he had the widest Toyota on the track to hold tightly on to his 3rd place and claimed yet another podium spot during the weekend.

The reverse grid draw for the final race was always going to be hit and miss but Ingram was happy enough with the number six ball that emerged from the hat. There were some heavy hitters surrounding him on the grid but he showed no signs of being intimidated, snatching fifth spot from Colin Turkington’s Subaru on lap two. Sadly, his charge up the field came to a premature end when he was forced to pit during the 16th lap with suspected head gasket failure, ending his race on the spot.

The series now returns to the place it all started back in March, and as it moves to Brands Hatch for the final round of the championship, Ingram sits in tenth in Championship standings and fourth in the Independents’ Trophy. Speedworks are holding 2nd spot in the Independent Teams’ Trophy.