Katie Milner – A force to be reckoned with 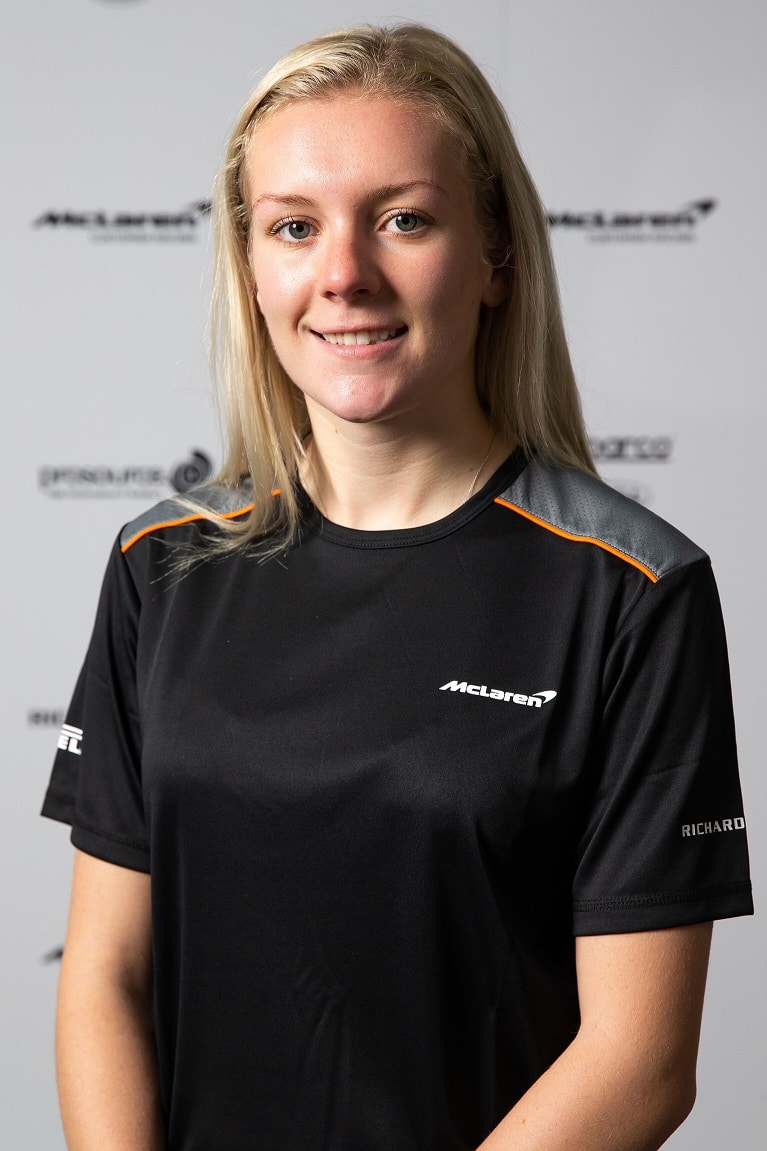 Twenty year old Championship winning racing driver Katie Milner from York is already a force to be reckoned with on track and is tipped for future major success.

Katie established her credentials very early in her racing career not only achieving top three results but also winning competitive Championships in the cut and thrust world of grass track racing; all at the tender age of 15.

Her natural ability to race and score wins was self-evident from the start and this early success in her racing career resulted in a successful transition from grass track oval racing to circuits.

What followed was Katie’s natural ability to shine and prove herself quickly and dominantly. Her outright pace and race craft were evident from the start and success was proven when she won her first circuit race in only her second season.

She went on to secure the Junior Saloon Car Championship title that same year, winning eight times with 12 podiums and five fastest laps; she remains the only female racer to do so in the history of the Championship. Her winning margin was so big it has not been beaten to date.

With a solid two years of racing under her belt Katie moved on to the highly competitive Ginetta GT5 Challenge series. This one make series promoted by established manufacturer Ginetta has become the hallmark of many of the support races as part of both the British Touring Car and British GT championships. She has been a consistent top 10 finisher and achieved her maiden pole position in 2019 at Thruxton.

To add to her race experience, Katie competed in two 24hr races at the iconic circuits Silverstone and Spa Francorchamps in Belgium in an all- female team and came away with top six finishes in both. This is the most demanding of racing and lining up with new team mates always adds a further dimension; strong finishing again proved her ability to race at the front. 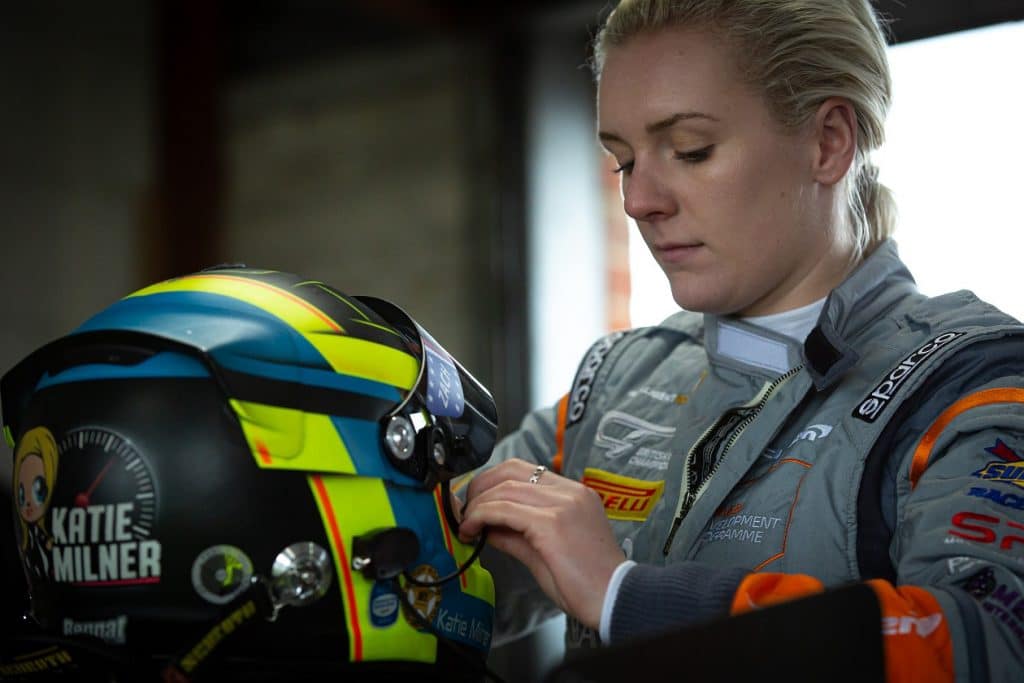 She has gone on to enjoy other race success and won the ladies support race for the prestigious Walter Hayes Trophy meeting at Silverstone in 2018.

Katie was the inaugural winner of the British Women Racing Drivers Gold star driver award After success in Ginetta’s, Katie’s ability, successes to date and future potential caught the eye of talent scout and established racer. Phil Glew who in tandem with Edge Sporting Management are an integral advisor within McLaren’s driver development programme. Edge provide essential management support and with Phil are renowned for their track record in promoting up and coming drivers.

They saw her talent and advised McLaren racing to take a closer look with a view to attracting Katie to be a part of their race programme for 2020.

What followed was a highly competitive “shoot out” winner takes all selection test in which Katie came out on top and was one of four drivers selected by McLaren to represent the factory team in the highly competitive and arguably one of the world’s toughest, the British GT Championship.

This championship is one of the most important for many of the prestigious manufacturer brands in the world of motorsport including Aston Martin, Bentley, Mercedes, BMW and Lamborghini. 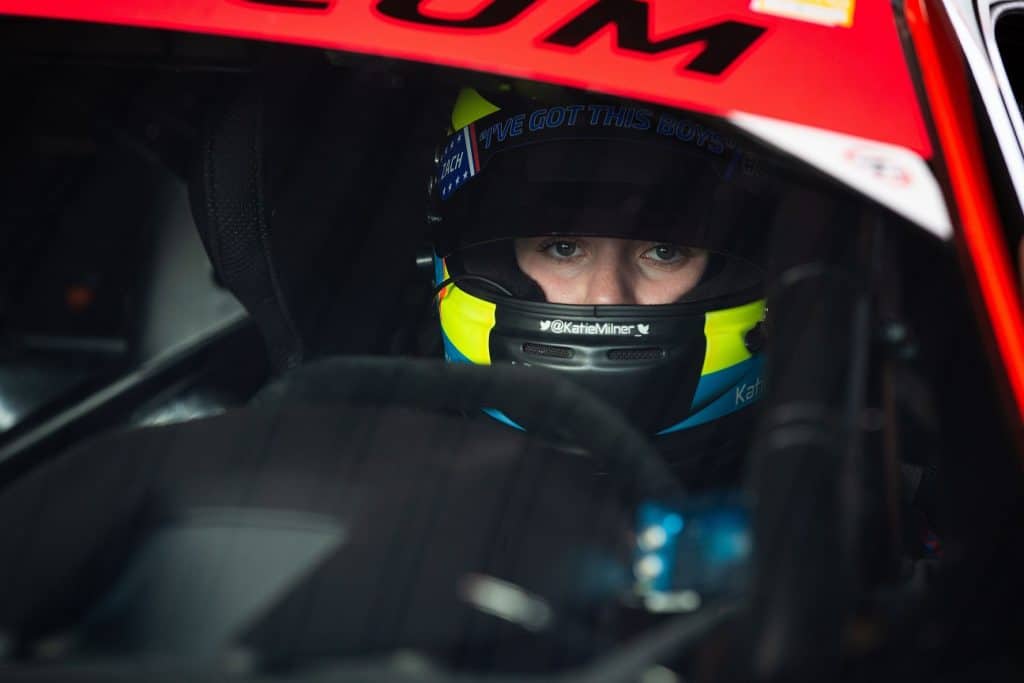 Due to the recent pandemic, McLaren have decided to withdraw the 2 DDP Cars from the 2020 British GT line up and to prepare for 2021. This means Katie will be signed for a 2 year contract. Although she won’t be racing in 2020, there are plenty of other activities as a factory driver for the rest of 2020.

Katie’s focus and attention is now firmly on a title assault in 2021 using the undoubted racing pedigree of McLaren and all of the resources a full factory programme has to offer. This will also provide sponsors with unique access to this most iconic brand in motorsport.

Opportunities like this and to be close to a factory works team are few and far between.

Katie is in a unique position to enable her partners to exploit this to maximum effect and with races in both the UK and Europe this association presents a superb opportunity to partner with her. As a McLaren brand ambassador she has the ability to provide partners with close access to this very special. 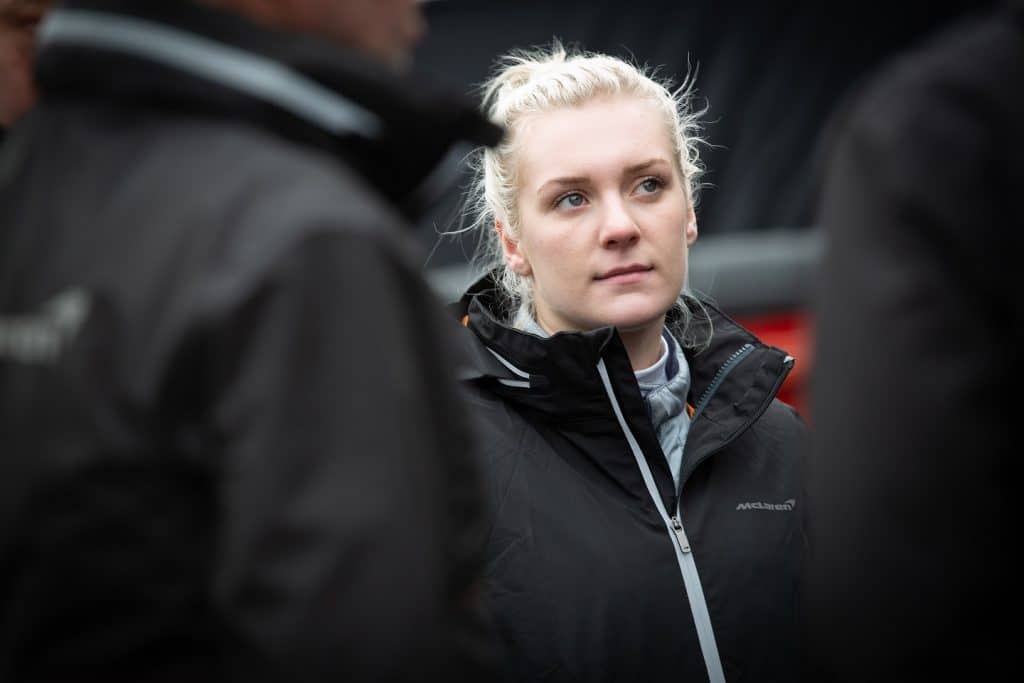