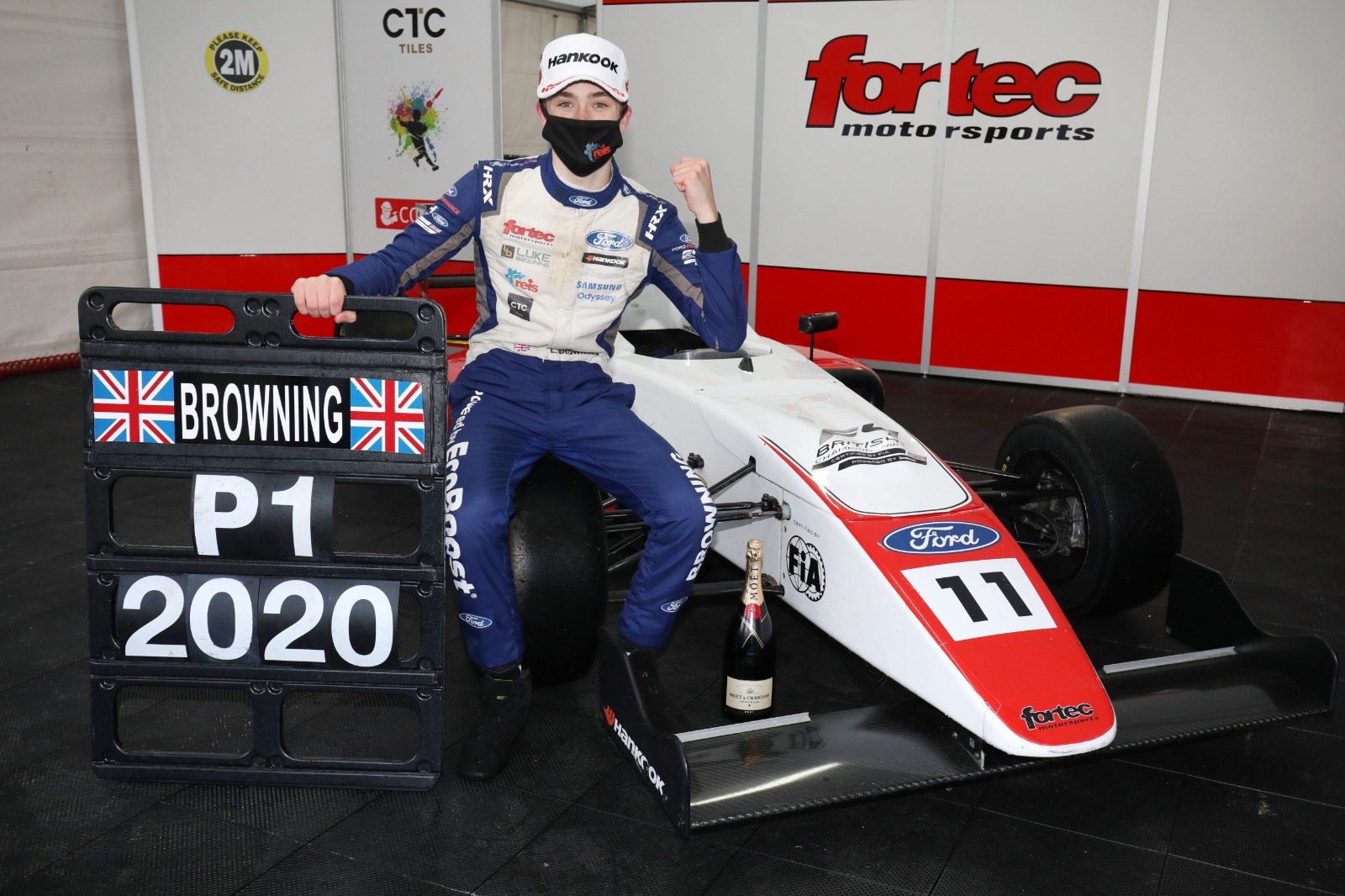 Rising star and Reis Motorsport Insurance supported Luke Browning secured the F4 British Championship certified by FIA, powered by Ford Ecoboost in dramatic fashion after a rain affected season finale at Brands Hatch last weekend. Below we take a look at how the events unfolded.

Going into the weekend level on points with Zak O’Sullivan, Luke was well aware of what he needed to do to secure the championship crown and an impressive performance in qualifying saw him snare a third pole position of the year ahead of his rival.

Setting two laps that would have been good enough for pole, Luke also secured pole for the third race of the weekend – which was decided on second fastest times.

From the front of the grid, Luke made the ideal start in tricky conditions in the opening race to lead O’Sullivan into turn one and the pair would run together throughout as they eased away from the pack behind. A controlled drive from Luke saw him keep O’Sullivan at arm’s length to secure a seventh win of the season and move into the points lead.

Race two in wet conditions on Sunday morning saw the grid reversed and started behind the safety car, which was then called out again as soon as the action go underway after an incident at turn one.

With O’Sullivan moving up to fourth – albeit with a move under yellow flags – Luke then took the restart in sixth but some impressive moves saw him quickly making up places as he followed O’Sullivan up into the podium places. Shadowing his title rival’s every move, Luke crossed the line in third spot but was then promoted into second when O’Sullivan was handed a penalty – giving him a handy lead to take into the season finale.

The final race would feature the most dramatic of starts as Luke slipped back into third on the opening lap but then suffered a spin at the final corner when the leading four drivers all ran off track on oil.
That left Luke at the back of the field and needing to make up places to score the points needed to beat O’Sullivan, who had survived the opening lap incident to find himself running in the lead of the race.

Luke was fighting his way back up the pack when rain started to fall, making it all but impossible for the slick-shot cars to stay on the circuit. As a result, the race was red-flagged and with half points awarded, Luke secured the championship title in the most dramatic of fashions by just four points.

Luke also ends the season having now scored more podium finishes in the series than any other driver and having scored the second highest number of points – behind a driver who spent an additional season in the series.

“Race one went exactly to plan and it was all about the start as I knew I could control it from the front – that was just what we needed,” Luke commented. “The circuit is tricky when it’s wet and to get the win having scored pole was the ideal way to start the weekend.”

“In race two, I saw Zak make the move on Mansell under the safety car so I knew that I just had to finish ahead of Mansell because they would be swapped around, so it was a case of just holding my position and making sure that I stayed out of trouble to bank the points ahead of race three.”

“I thought we’d been given the biggest dose of bad luck possible in race three as we came out of the final corner on lap one and there was oil down on the track. All three of us at the front lost it, but I lost it the worst and went round. At that point, I thought it was all over and it felt like the bottom had dropped out of my world. I just had to push hard and then the rain arrived and for once, luck was on my side as I’ve had my fair share of bad luck in recent seasons!”

“To be British F4 Champion is an amazing feeling and I can’t thank the team enough. At times this season we’ve only had one car but we’ve gone out there and beaten Carlin to the title – and to be the first team to do that is a fantastic achievement. I also have to thank my parents and everyone back at home who has supported me as I couldn’t do it without them.”

“It’s been a funny season without fans being trackside and winning at Oulton Park in particular with no-one there was tough. There have been challenges thrown up because of COVID, but we’ve come through it and have gone out there and entertained people when they needed it most.”