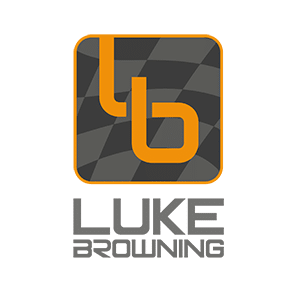 The Cheshire youngster qualified fourth on the grid in his Richardson Racing-run car for the opening race in Scotland, with rain on race day throwing an added challenge into the mix when he took his place ready for the start.

His hopes of victory ended on the opening lap when he was tipped into a spin at Clarks, with Luke then forced to pit to allow the team to check a handling issue on the car.

The Safety Car allowed Luke to stay on the lead lap and he rejoined at the back of the field before producing an astonishing drive through the pack – lapping nearly a second quicker than anyone else en-route to fourth spot.

Luke started the second race from fourth on the grid and fought his way ahead of title rival Adam Smalley on the fourth lap before the first of two Safety Car periods prevented him from challenging race leader Louis Foster.

He would end the weekend with a second place finish that allows him to remain firmly in contention for championship honours.

“It’s a good haul of points but we know we could have got two wins with the pace in the car and I have to wonder what might have been,” he said. “The incident in race one really cost me and to be honest, I didn’t think I would be able to come back the way I did but the car was mega and it was great fun.

“In race two, I think I could have pushed for the win had it not been for the safety cars which meant I couldn’t really make a move on Louis for victory. We’ve minimised our losses in the championship and it’s just a shame we didn’t claw back points like we should have done. We’ll aim to put that right at Silverstone.”