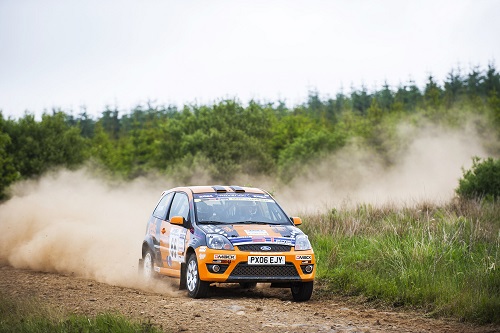 Bingley rally driver Sam Bilham will head to Cumbria this weekend as he begins his Fiesta ST Trophy campaign on the Malcolm Wilson Rally.

The 2300 Club John Easson Award winner has set his sights on winning the single make series after finishing as runner up last year. The 20 year old Yorkshire man will also aim to retain his Maxxis MSA English Rally Championship title to boot.

Bilham will be joined by new co-driver Cameron Fair for 2017 and the newly formed duo were forced to skip the opening round of the series last month due to a parts shortage for the Fiesta.

However, the Cambrian Rally was cancelled after just one stage due to the snow and ice so the championship now moves to seven rounds with five opportunities to score points.

After leading the series for much of last season, Bilham is keen to get his 2017 campaign underway with a podium result as the championship see’s almost 15 crews competing in the series this year.

“I will certainly have to draw on my experience from last year if we are to be towards the top of the podium this weekend” he says.  “There are a lot of unknowns this season so solid points at the beginning of the season have never been more important. We had a good run in 2016, but had too many fourth places and it made all the difference when it came to the title, so the aim is certainly for a win.”

“It was a shame for everyone that the opening round (Cambrian Rally) was cancelled but it really has played right into our hands” he continues.  “We have experience of the events and will need to find the right balance between getting the points and upping the pace. Just five chances to score will mean the season could turn into a sprint rather than a marathon.”

The Malcolm Wilson Rally takes place on Saturday 11th March and offers over 40 stage miles in the forests surrounding the Lake District.