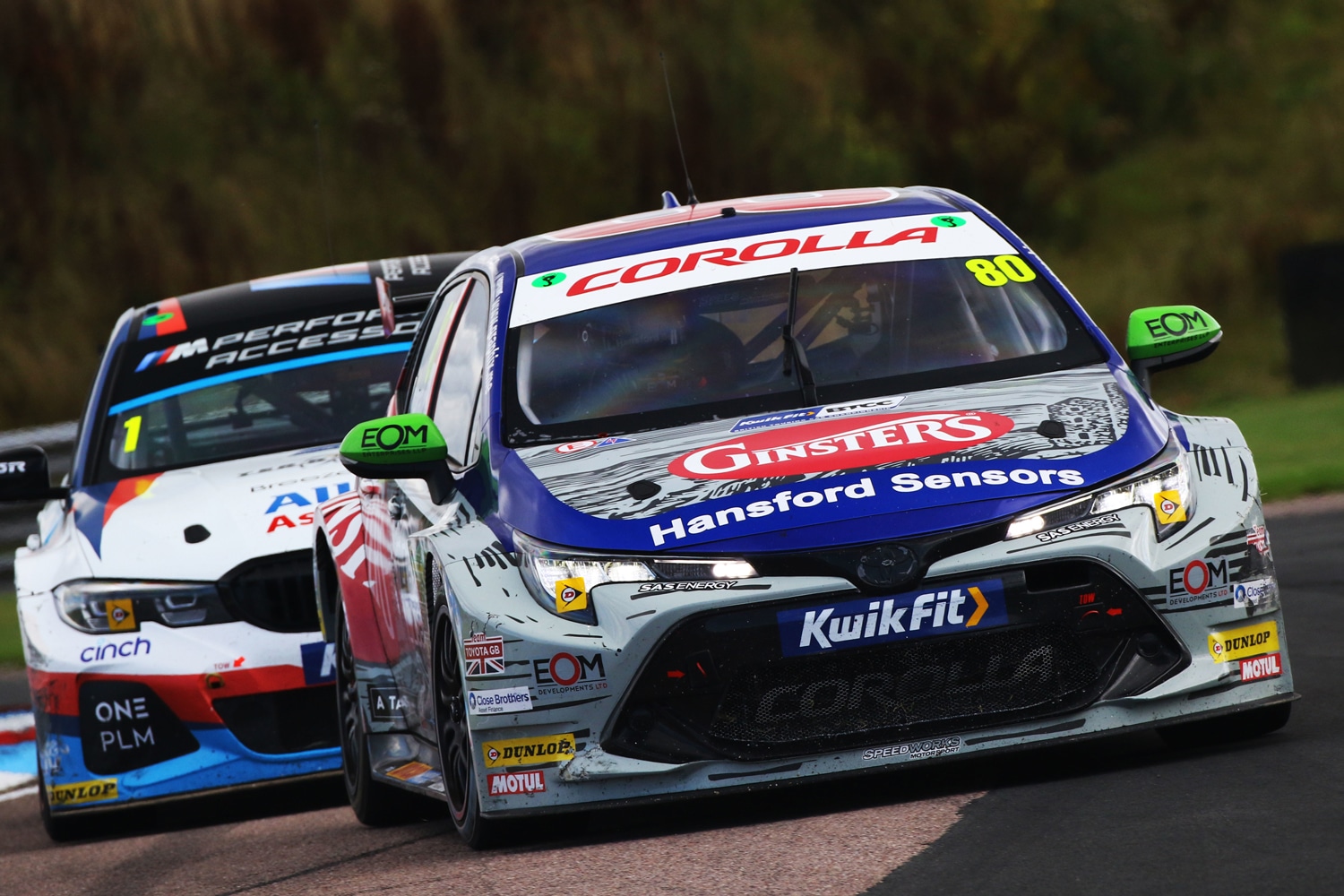 Tom Ingram added another hat-trick of points-scoring finishes to his 2019 tally as the British Touring Car Championship sped into the UK’s fastest circuit, Thruxton, last weekend (17/18 August), although a rough-and-tumble final race prevented the Team Toyota GB with Ginsters star from exploiting his and the Toyota Corolla’s full potential.

After featuring well inside the top ten in both free practice sessions in Hampshire – going quickest of all through the middle sector of the lap in FP1 – Ingram went on to qualify eighth amongst the 30 high-calibre contenders in the UK’s premier motor racing series. The Bucks-born ace was, however, left to rue a ‘moment’ at Church – the fastest corner in the country – that likely deprived him of a top five grid slot for race one.

A mistake at the Complex on the first lap of the curtain-raiser cost Ingram ground but he immediately fought back, and he was zeroing in on the scrap ahead for seventh until he found himself shuffled down to 11th in the closing stages.

Being surrounded by fast-starting rear wheel-drive cars on the grid in race two, the BTCC’s reigning two-time Independents’ title-winner inevitably ceded a couple of places away from the lights but wasted no time at all in regaining them, with a crowd-pleasing ‘dive bomb’ on championship leader Colin Turkington into the chicane going down as unquestionably one of the overtaking moves of the weekend.

From there, Ingram spent the majority of the race embroiled in a multi-car tussle for third, keeping company with the likes of Turkington, Matt Neal, Andrew Jordan and Ashley Sutton – BTCC champions all. After dispatching Sutton and race one winner Sam Tordoff in swift succession, he went on to take the chequered flag eighth.

Race three got underway beneath menacing skies, and in front of the live ITV4 television cameras and an appreciative trackside audience, the Team Toyota GB with Ginsters man was the architect of a superbly assertive opening lap to pass both Turkington and Jordan and climb to seventh.

A dramatic duel with Sutton followed – encompassing countless side-by-side skirmishes and no shortage of contact as the 2017 title-holder vigorously defended his position – before a sideswipe from the Subaru driver through the high-speed Segrave corner on lap 11 edged the Corolla onto the grass, just as the pair had latched onto the tail of the lead battle.

That dropped Ingram to ninth and dashed his hopes of mounting a late charge for the podium, but the 25-year-old boldly held his nerve. His determination eventually paid off as – headlights ablaze – he grittily found a way past his race-long nemesis on the very last lap, notwithstanding intensifying rain that injected an extra challenge into what was already an extremely physical and demanding contest. A better fastest lap than any of the top four finishers went to show what might have been.

The trio of results nonetheless kept Ingram firmly inside the top ten in the Drivers’ standings in eighth place heading next to Knockhill in Scotland on 14/15 September. Team Toyota GB with Ginsters will travel north of the border occupying ninth spot in the Teams’ table. 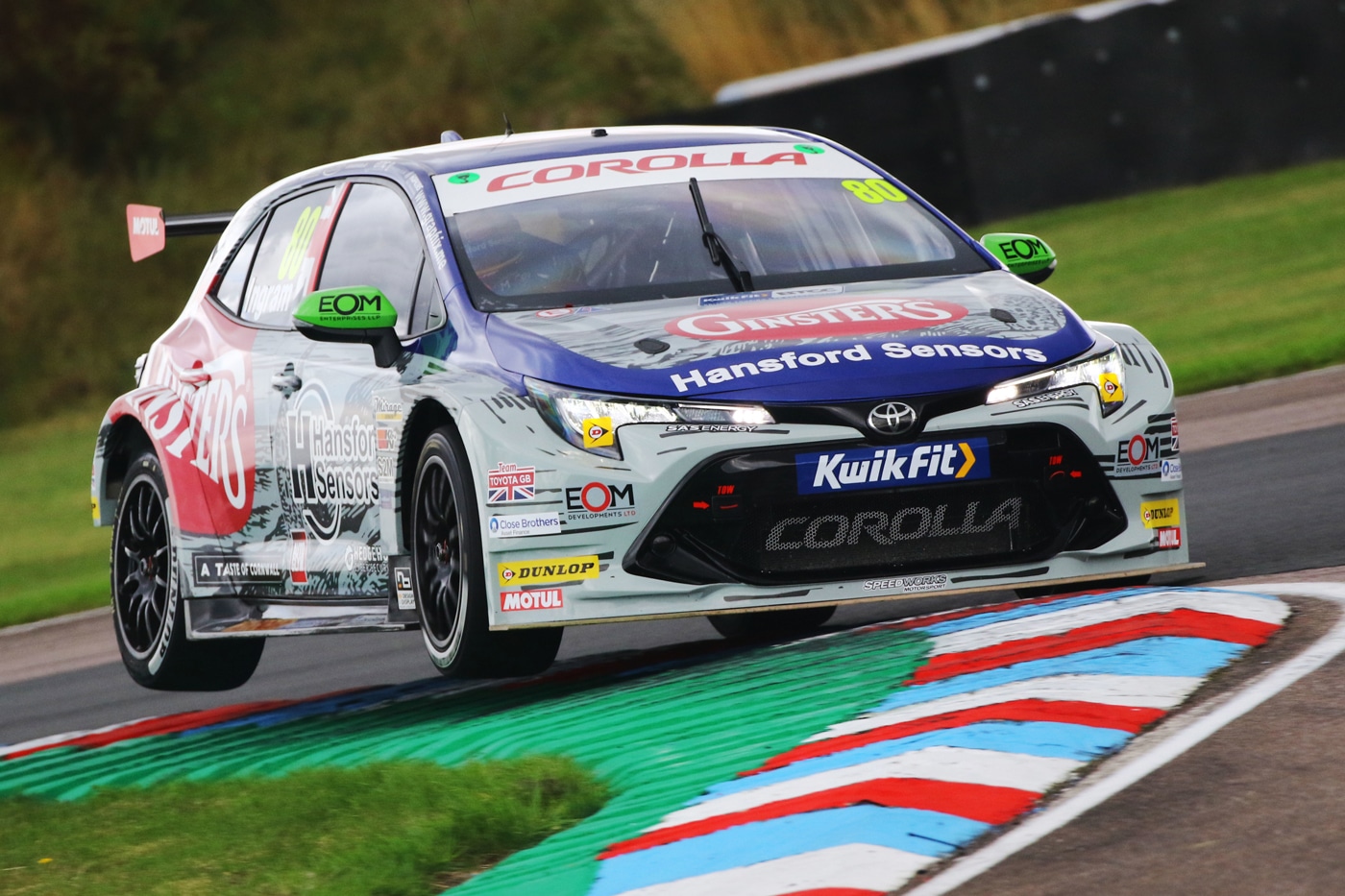 “Thruxton was a solid if not spectacular weekend. Tom dug deep to bring home another full house of points scores in three particularly ‘lively’ races, which keeps him in the hunt for a strong championship finish and most significantly of all, we’ve clearly improved the Corolla since we were last here in May.

“With very similar weight on-board, we were seven places further up the grid in qualifying than earlier in the season and more than halved the gap to pole position – we actually went quicker in what were slower conditions, which marks a real step forward. We also outpaced and outscored the championship leader in all three races – even on equal ballast – which was encouraging.

“I’m very happy with the progress made both before and over the weekend. Thruxton requires such a different set-up to any other track we go to and you can’t really test here, so all the work has had to be carried out back at our Northwich workshop and once again, I must pay tribute to the stellar job done by the whole Speedworks crew over the BTCC’s summer break.

“When you already have a car that’s pretty quick, you’re restricted to small steps on a race weekend – you daren’t do anything drastic, because big changes always carry the risk of sending you backwards rather than forwards. We kept chipping away, and by race three we had a package capable of challenging for the podium.

“The weekend has given us plenty more pointers to continue honing and refining the Corolla to extract the best out of it, and we’re all very excited to get back to a more conventional circuit next time out – one that has traditionally been a reasonably happy hunting ground for us.” 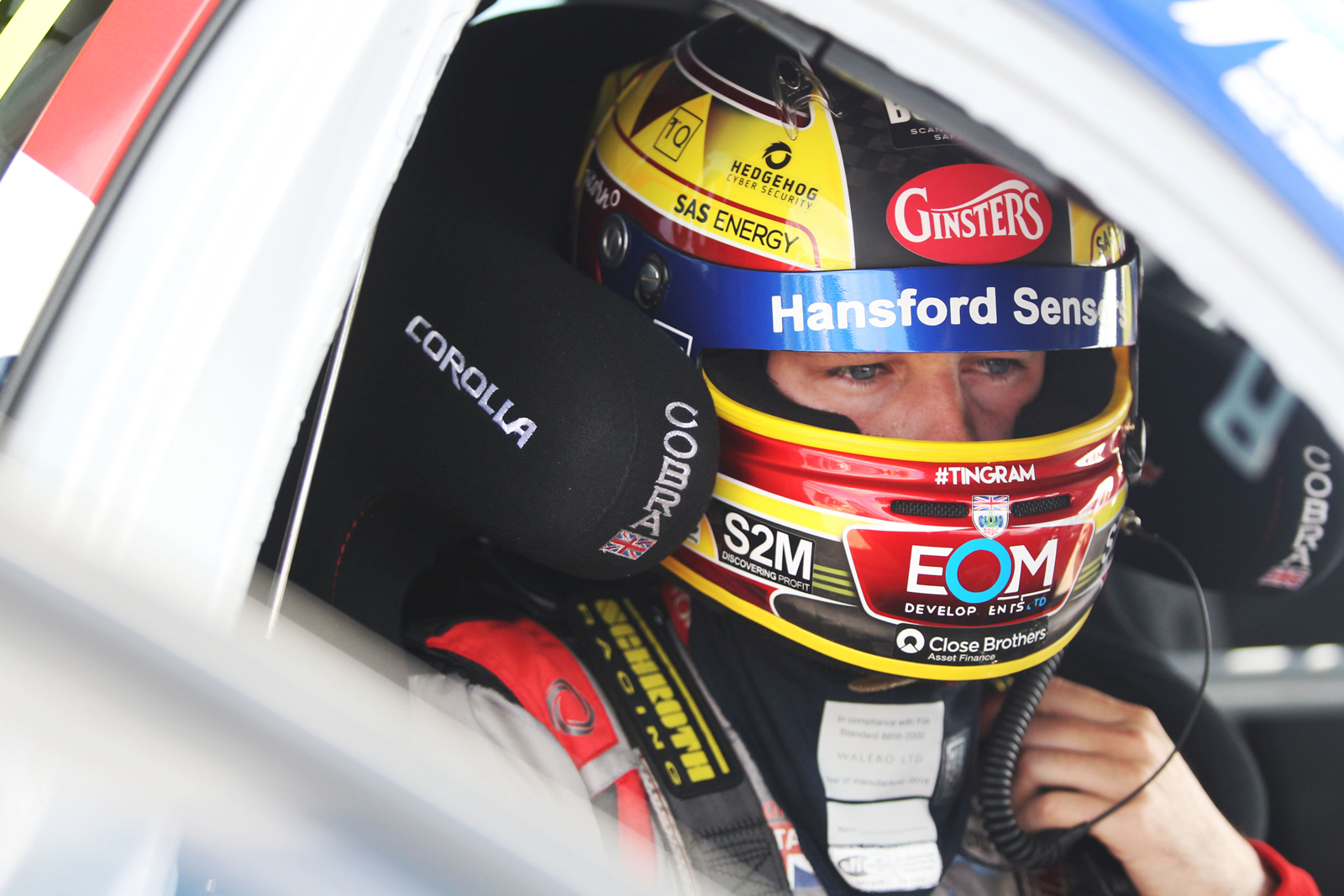 “The results may not necessarily reflect it, but the Corolla definitely felt better than it did at Thruxton earlier in the year. It was just what I would call a very ‘vanilla’ weekend and we slipped under the radar a bit – not scene-stealing like Snetterton, but there-or-thereabouts throughout. There’s clearly still room for improvement, but equally, you can never read too much into people’s form at Thruxton because it’s such a niche circuit.

“We underperformed in qualifying, and that one was completely on me. I just dropped a wheel slightly off at Church – not the kind of place you want to be making a mistake – and filled the radiator up with grass. That left us slightly out-of-position on the grid, although we didn’t really have the pace in race one to do anything special anyway – we seemed to lose something from Saturday to Sunday that we still need to evaluate and get to the bottom of.

“We conceded a bit of ground on the first lap when I tried to go around the outside at the Complex – it was very close to coming off, but I left my braking just a fraction too late and that cost us. Once you’re back in the pack at Thruxton, it becomes very difficult to make progress because the advantage tends to ebb-and-flow from one part of the track to the next.

“The car was sliding around quite a lot and I was really having to hang on through Church, but we got our heads down, worked hard and consistently improved it over the course of the day. We struggled for grip again early on in race two which resulted in a couple of big ‘moments’, but the Corolla came on stronger over the second half and that allowed me to pull off a few enjoyable moves – although it wasn’t until race three that we got it properly where we wanted it to be.

“We had a good, aggressive start to the final race, and I held my breath a little going three-wide through Noble at 130mph, which was pretty heart-in-mouth! I then seemed to spend the whole time trying to get past and shake off Sutton. It felt like I was staring at his rear bumper for half the day, and if he hadn’t pushed me off, I’m confident we’d have finished inside the top five – Jason Plato, who eventually came in fifth, was behind us when the contact happened. That’s racing sometimes – we’ll come back fighting at Knockhill.”