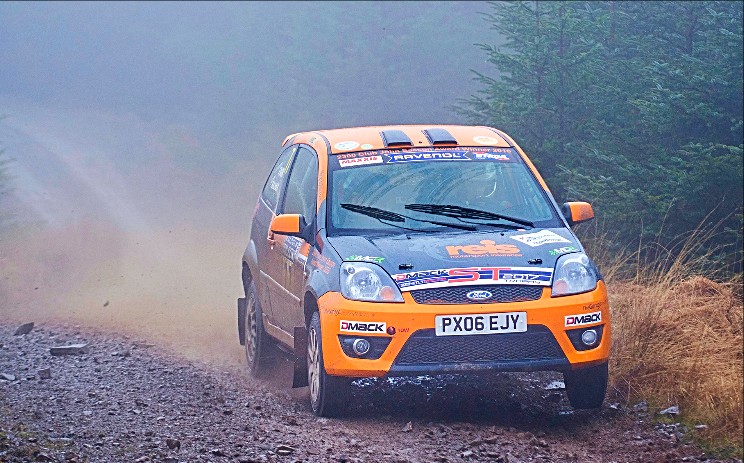 Sam Bilham had the best possible start to his BTRDA Fiesta ST Trophy campaign, taking the category win by over two minutes at the Malcolm Wilson Rally last weekend.

Joined for the first time by Scottish co-driver Cameron Fair, the duo headed to the event with a tough challenge ahead. They lead the nine competitors in the hotly contested single make series from the second stage and were never surpassed on the remaining Lake District tests.

Despite the lack of pre-event testing due to a parts shortage for his Fiesta, Bilham was in a confident mood as he began the opening round of the championship.

Understandably, Bilham had a tentative stage time through the opening Hobcarton test as he and Cameron found their feet in the slippery conditions. However, any sign of pre-event uncertainties were soon banished when he quickly found his rhythm and ended the opening leg with three fastest stage times to lead both class N3 and the Fiesta ST Trophy at the first service halt of the day.

The Cumbrian forests are notorious for the changeable grip levels and the recent damp conditions made going tricky for the some 120 crews on the event.

Two stages in the Grizedale forest complex had the potential to unseat Bilham’s performance but he emerged with a commanding lead. He took a mature approach to the final test to finish with an almost two minute gap to the second place Fiesta.

“I think that has truly been the perfect event for us” said Bilham at the finish.

“We had a few things against us going into this event and it’s always difficult to have a new co-driver as you need time to gel. But everything just clicked today and once we got the first stage out of the way, we found a comfortable pace and just stuck to it for the rest of the really. No risks, no heroics and it just seemed to work well for us”.

“We couldn’t have had a better start to the season” he continues. “The Fiesta ST Trophy was such an unknown this year and with 11 crews out everything was pretty much up in the air as to who would come out on top. But it was really important to get this win under our belts so we can head to the remaining rounds with a points buffer and renewed confidence. I have to say a huge thank you to the team and our supporters for believing in us and helping us get our season off on the right foot.”

The next round of the series, the Somerset Stages Rally takes place on the 8th April in Minehead.