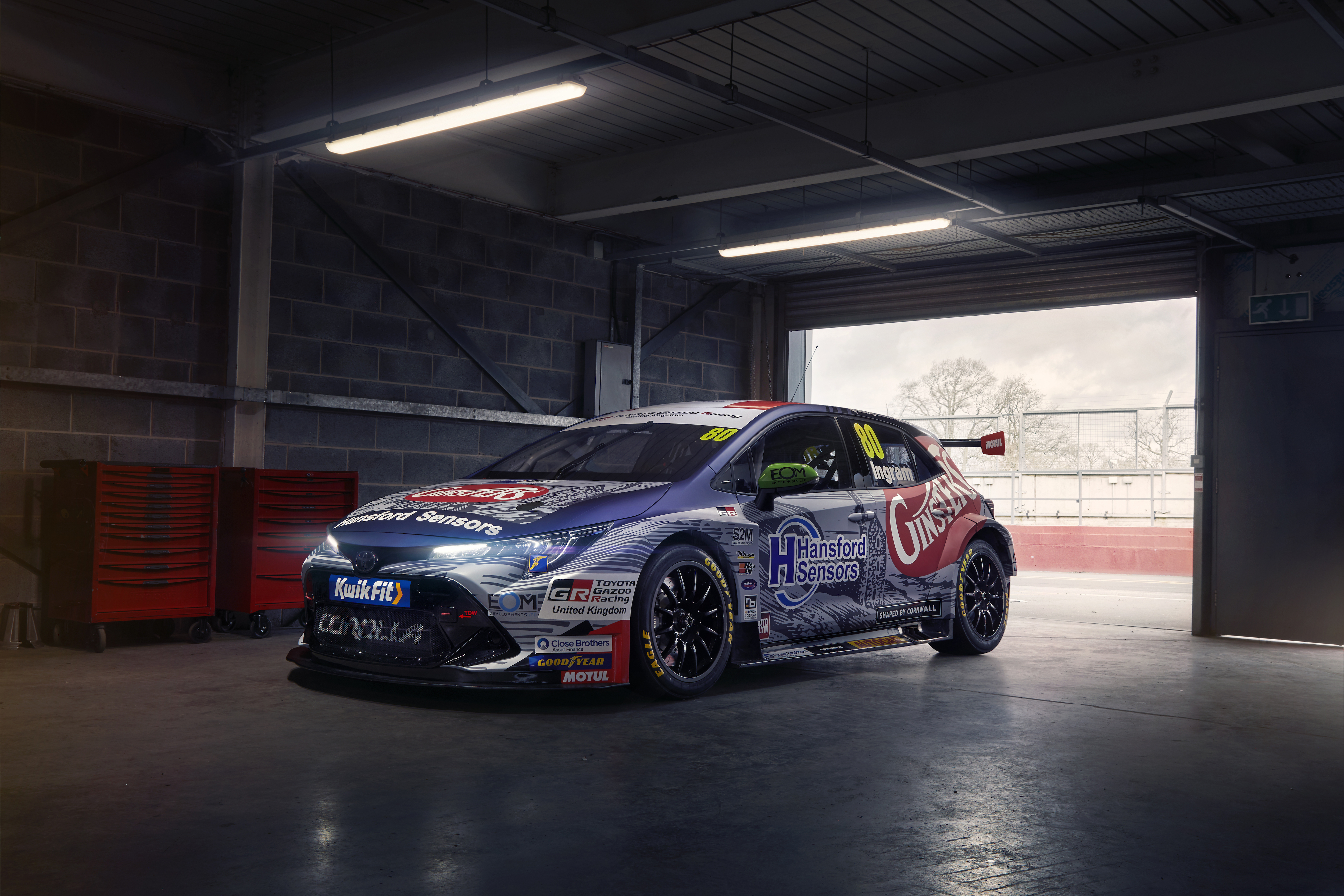 Two-time British Touring Car Championship Independents’ title-holder Speedworks Motorsport will run under the ‘Toyota Gazoo Racing UK with Ginsters’ banner this year, as Tom Ingram sets his sights on the most prestigious prize in national motor racing behind the wheel of the team’s Toyota Corolla.

Having established a well-deserved reputation as the BTCC’s most prolific giant-killer for its performances and results against bigger-budgeted, Manufacturer-backed rivals, Speedworks stepped up a gear in 2019 by trading in its Toyota Avensis – a trusty companion since 2011 – for the all-new Corolla, as the Northwich, Cheshire-based outfit joined the Manufacturer ranks itself with the support of Team Toyota GB.

In Ingram’s hands, the car was a winner as early as its sixth race – in front of some 4,500 members and families from Toyota Manufacturing UK at Donington Park – in a championship commonly regarded as the world’s toughest tin-top series.

The talented young Bucks-born ace added three more victories to his tally before season’s end – a dominant lights-to-flag triumph at Snetterton and a hugely popular and hard-earned double-top in treacherous conditions at Silverstone – to place sixth in the final Drivers’ standings amongst the 32 high-calibre protagonists.

In 2020, Speedworks and Ingram will take their challenge to the next level again after aligning with Toyota Gazoo Racing, the umbrella organisation for the Japanese brand’s international race and rallying activities.

Toyota Gazoo Racing is unquestionably one of the sport’s biggest success stories in recent years and has been the guiding force behind multiple titles and a number of eminent accolades.

Drivers and teams running under the Toyota Gazoo Racing banner have twice been crowned champions in the FIA World Endurance Championship (2014 and 2018/19) and achieved race-winning glory in the Le Mans 24 Hours (2018 and 2019).

Both series are currently led by Toyota crews, too, with British drivers Mike Conway and Elfyn Evans respectively topping the WEC and WRC standings, while the Toyota Gazoo Racing Hilux was the overall winner of the 2019 Dakar Rally – one of the world’s most gruelling motorsport contests – and finished runner-up in the legendary endurance event earlier this year.

Now, Ingram and Speedworks are primed to bring the Toyota Gazoo Racing UK name to the grid in Britain’s premier motorsport series.

Following the only official pre-season group test at Silverstone on Tuesday next week (17 March), the forthcoming BTCC campaign will rev into life at Donington Park on 28/29 March.

All of the high-octane, doorhandle-to-doorhandle action will be broadcast live and in high-definition on ITV4.

“To see the Corolla running under the Toyota Gazoo Racing UK banner this season will be a great incentive for everyone in the team and for all of our fans, as it connects us directly with one of the world’s most successful motorsport operations.”

“It is an absolute honour and clear validation of the outstanding effort put in by each and every member of the Speedworks crew, of whom I am immensely proud.”

“We are all very much looking forward to building upon what we achieved in the Corolla’s maiden campaign last year and mounting an even stronger championship challenge in 2020.”

“The last few years have been an absolute whirlwind, from our back-to-back Independent title wins to the arrival of official Manufacturer support in 2019 and now the close affiliation with Toyota Gazoo Racing, whose pedigree in the sport speaks for itself.”

“I was privileged enough to be granted a go on Toyota Gazoo Racing’s state-of-the-art simulator last autumn, which was quite an eye-opener, alongside a guided tour of the TS050 Hybrid sports prototype that competes in WEC.”

“The technical prowess and attention-to-detail behind both was extremely impressive, and the kind of ‘money-can’t-buy’ expertise we will be looking to channel in our pursuit of BTCC silverware this season. I can’t wait to get started!”

“We’re pleased to be able to bring our involvement in the BTCC within our worldwide Gazoo Racing activities. Just as much about great performance and winning races, it’s a way we can help more people experience and enjoy the excitement of motorsport.”

“We’re confident the proven race-winning combination of Tom, the Toyota Corolla and Speedworks will be doing just that through the season ahead.”