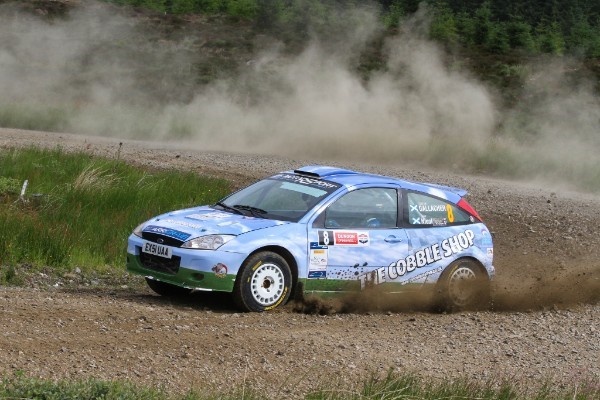 With just two rounds remaining of the ARR Craib MSA Scottish Rally Championship (SRC), the Grampian Forest Rally 2018 could prove pivotal in deciding who will be the new Scottish champion.

Ford Focus WRC driver Andrew Gallacher currently leads the standings thanks to a breakthrough victory on the Snowman Rally and a decisive win last time out on the Argyll Rally. However, the Hurlford pilot holds just a one point lead over Donnie MacDonald, who has been improving with every round behind the wheel of his Ford Fiesta R5+.

The Grampian is the fifth event of the year and takes in over 40 competitive stage miles in the Kincardineshire forests. MacDonald will be keen to get his first victory since the Snowman in 2016 to grab the initiative in his title tussle with Gallacher, but the battle for overall glory will stretch far beyond the championship’s top two.

Jock Armstrong and Cameron Fair start at one in their Subaru Impreza, and are in need of a confidence boost after crashing early last time out in Argyll. The double SRC champion lost his title to Euan Thorburn on this event last year, so will be keen to banish those memories with a strong result this weekend.

After missing much of the season, Garry Pearson returns in his Ford Fiesta R5 at two with new co-driver Dale Bowen alongside. The Duns driver is without substantial seat time but his pace in the SRC is well documented, so he could be dark horse for a podium on Saturday.

Gallacher and co-driver Jane Nicol start at three with rivals MacDonald and Jamie Edwards just behind as car four, as John Wink and John Forrest mark their one year anniversary behind the wheel of a Hyundai i20 R5 with their highest ever SRC seeding at five.

Freddie Milne and Patrick Walsh are back out in their Subaru Impreza WRC, eager to get themselves back on the podium after coming so close on the previous two rounds.

Bruce McCombie and Michael Coutts are still in the championship picture after grabbing their first podium in three years on the Argyll Rally, continuing to push their Mitsubishi Evo IX to places where it really shouldn’t belong.

Title aspirants Mark McCulloch and Michael Hendry have seen their challenge evaporate with a string of mechanical failures in their Ford Fiesta R5, so the pair have switched to an ex-Iain Wilson Subaru Impreza for the Grampian.

Having missed the Argyll Rally, Lawrence Whyte returns to SRC action at nine in his Ford Fiesta R5 with defending co-driver champion Paul Beaton alongside. Michael Binnie and Claire Mole start at ten in their Mitsubishi Evo IX.

Greg McKnight leads the Scottish 2WD contingent in search of a fifth consecutive class win in his Ford Escort Mk2. Duncan MacDonald pushed McKnight hard on the Speyside Stages and returns after a lengthy break in his Mk2, while Paul McErlean and Fraser MacNicol also join the party in their Mk2 Escorts. After failing to start the Snowman, Mike Stuart makes his first start of the season with Sinclair Young alongside.

John Wink and Lawrence Whyte are the favourites for SRC Challengers honours, although Alan Dickson, Paul McErlean and the returning Marty Scott will all be pushing hard to take the victory themselves.

The battle to become Scottish Junior champion is going down to the wire, with Tom Howie (Talbot Sunbeam), Ally Currie, Niall Cowan Jr and Scott Peacock (MG ZR) all still in the frame and eager to bag the top result in Aberdeenshire.

As well as the overall result and class position, competitors will also be eyeing up the chance to receive the SRC John Horton Star Driver Award nomination. Paddy Munro, Marty Scott, Angus Lawrie and Ross Hughes have already booked themselves a place in the end-of-season shoot-out, but plenty other will want to join them with the opportunity to receive tuition from Tapio Laukkanen at stake.

The Grampian Forest Rally kicks off with a town centre ceremonial start in Banchory on Saturday (11th August) morning before heading to the nearby forests for six special stages of competitive action.