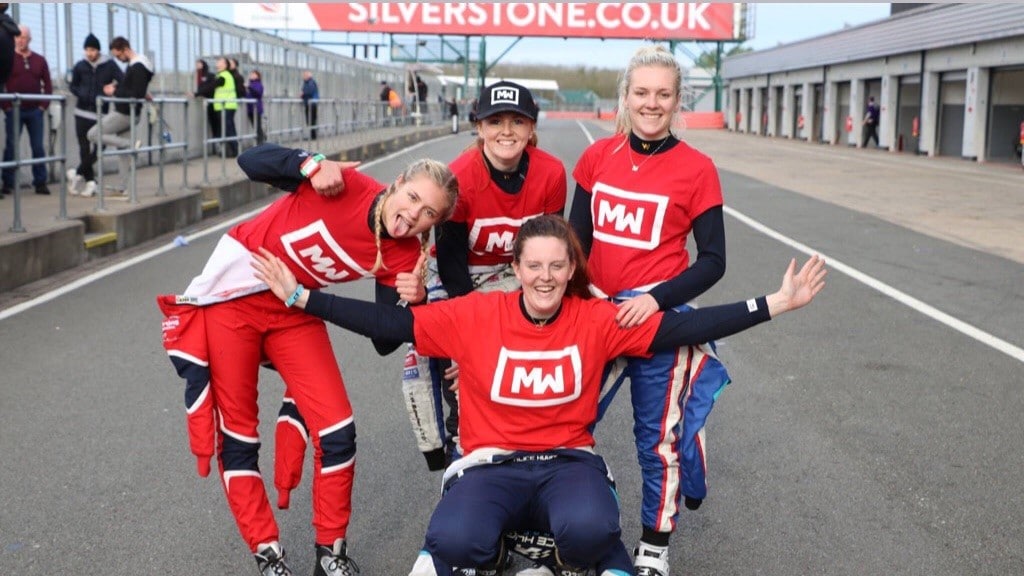 All four drivers fought against the clock, the elements and the on-track antics of their fellow drivers to earn a top-five position in an event where getting to the finish is the prime objective.

Having qualified in eighteenth and being bumped up one grid spot due to another car being underweight, it took a few hours for the girls’ challenge, led off by Katie Milner, to really get going, but by nightfall, the Merlin International-run Citroen C1 was up into twelfth place. At around midnight, they really began to motor and punched their way into the top ten, thanks in part to Katie’s two stints without sleep. As Sunday dawned, they were fifth, with Alice Hughes putting in consistent laps like a clockwork racing driver. During Jem’s last stint, they ran as high as second, before a blow out lost them valuable time at the beginning of Sami’s second drive for the team.

“A P2 was looking like it was on the cards,” said Alice afterwards. “But a swoop of bad luck and a puncture put us P5.”

In a week where women’s ability to race cars at all has been questioned by figures who really should know better, Team Motorsport Woman proved that the right opportunities are really all that is needed. “Teamwork makes the dream work” has become a cliche and there was plenty of bonding over biscuits, unicorn onesies and in-garage raves, courtesy of Katie’s dad, double British rally champion Jonny Milner, but “test to be the best” was even more true. All four drivers, with the help of Motorsport Woman and Jonny Milner’s team, had tested hard so that they knew both the car and the track inside out and lined themselves up for as few surprises as possible. Not glamorous, but highly effective. It was telling that the final setback, a tyre blowout, was something that could neither be predicted or managed.

“The testing we had beforehand was a great head start. Qualifying in the dark meant we could trust what track knowledge we already had and not be distracted,” is how Sami Bowler sums up the approach.

“We all gained so much working together as a team,” said Alice Hughes. “We could all relay information back to the engineers to get the best out of the car, allowing us to be both consistent and fast.”

For Jem Hepworth, the youngest of the team, it was her first proper car race, but she was immediately on the pace and worthy of her place. “I couldn’t have wished for a more amazing introduction to racing cars than this!” she said. “The team were just awesome.”

The sheer volume of cars on the track presented its own challenges: 99 is a grid size more suited to a multi-storey car park than a racetrack. Add to that darkness, fatigue and drivers of wildly varying skill and experience levels, and that makes a real trial. And yet, Team Motorsport Woman rose to it. When Sami Bowler had a near miss with an accident that erupted in front of her, she got so angry at having lost time that she turned it into extra determination and narrowly set the fastest lap for the team. Sami has only one year of racing experience but a ferocious will. So much for women lacking competitive instinct.

“The 24 hours absolutely flew!” she said after the race.

David Coulthard has repeatedly said about creating women’s teams in existing race series as opposed to starting women-only series: “if you keep using the same ingredients, you’re just going to get the same cake.” If that is true, then it must be that Team Motorsport Woman has Mary Berry-level baking skills.

“Wow, what an amazing weekend! First ever all-girl C1 24Hr team and we finished P5. So close to the podium but a puncture and a bit of damage cost us. I’ve loved every second working with these girls and the team. I’m so excited to see what’s next for us.”