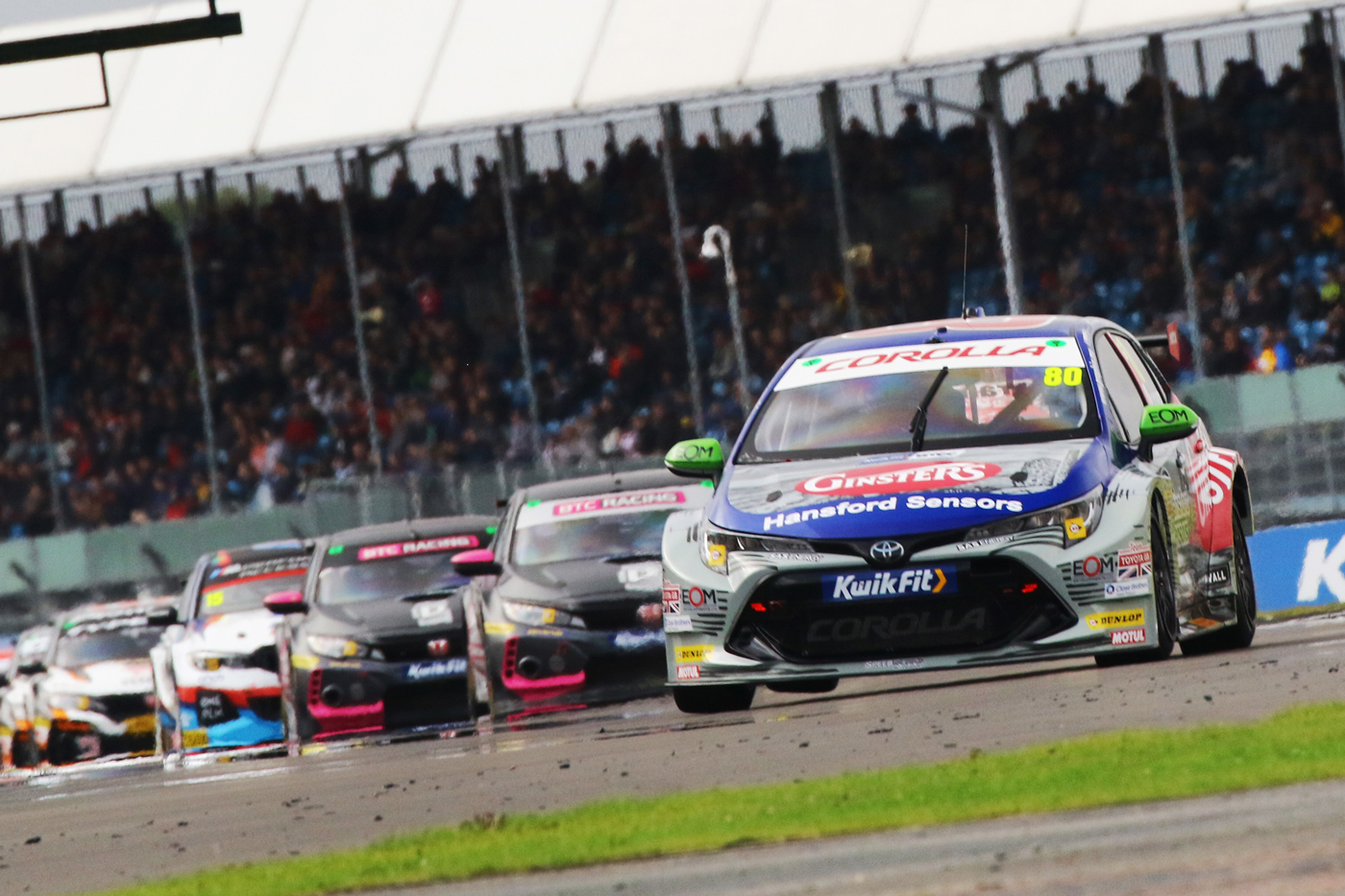 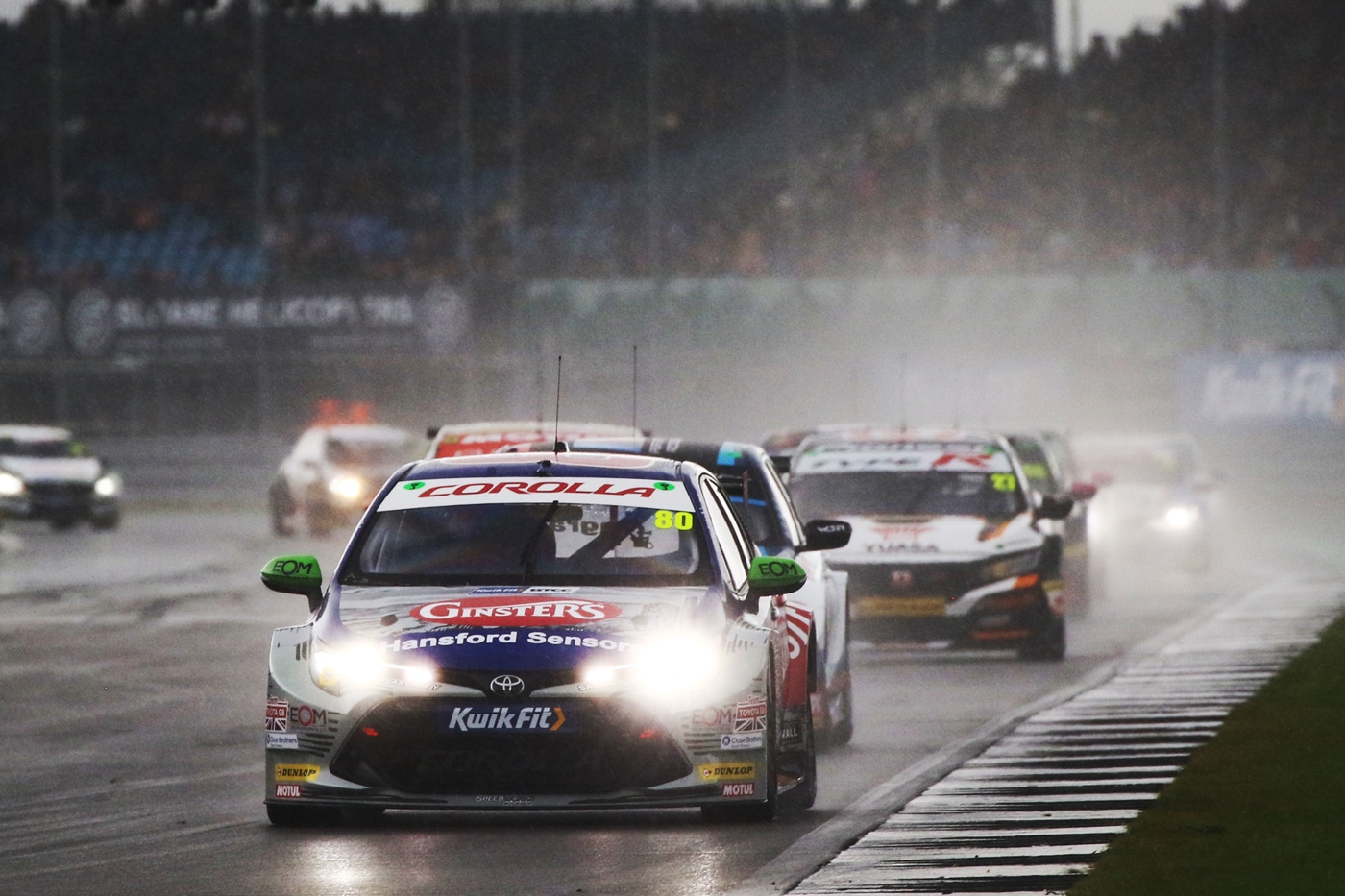 Tom Ingram arrived at Silverstone as the most successful driver there in recent years in the British Touring Car Championship – and a sublime double victory behind the wheel of his Toyota Corolla extended that run in style yesterday (29 September) on a landmark weekend for Team Toyota GB with Ginsters.

After featuring up at the sharp end throughout free practice, Ingram made light of the 24kg of success ballast aboard the #80 Corolla to line up fourth on the grid in qualifying amongst the 30 high-calibre contenders, a scant 0.092 seconds shy of pole position.

Despite the extra weight making his car the heaviest amongst the top five, he immediately went on the attack on race day, putting on a stellar show for the hardy spectators braving the distinctly inclement conditions and in front of both a number of Toyota (GB) top brass and the live ITV4 television cameras.

Morning rain meant Ingram’s side of the grid was less grippy at the start of race one, but the Bucks-born ace shrugged off that disadvantage to advance to third when the lights went out, before muscling his way past three-time champion Matt Neal for second at the end of the opening tour. Immediately pulling away, he rapidly reduced the deficit to double title-holder Jason Plato in the lead, prising the door open going onto lap four and toughing it out along the start/finish straight to boldly seize the initiative. 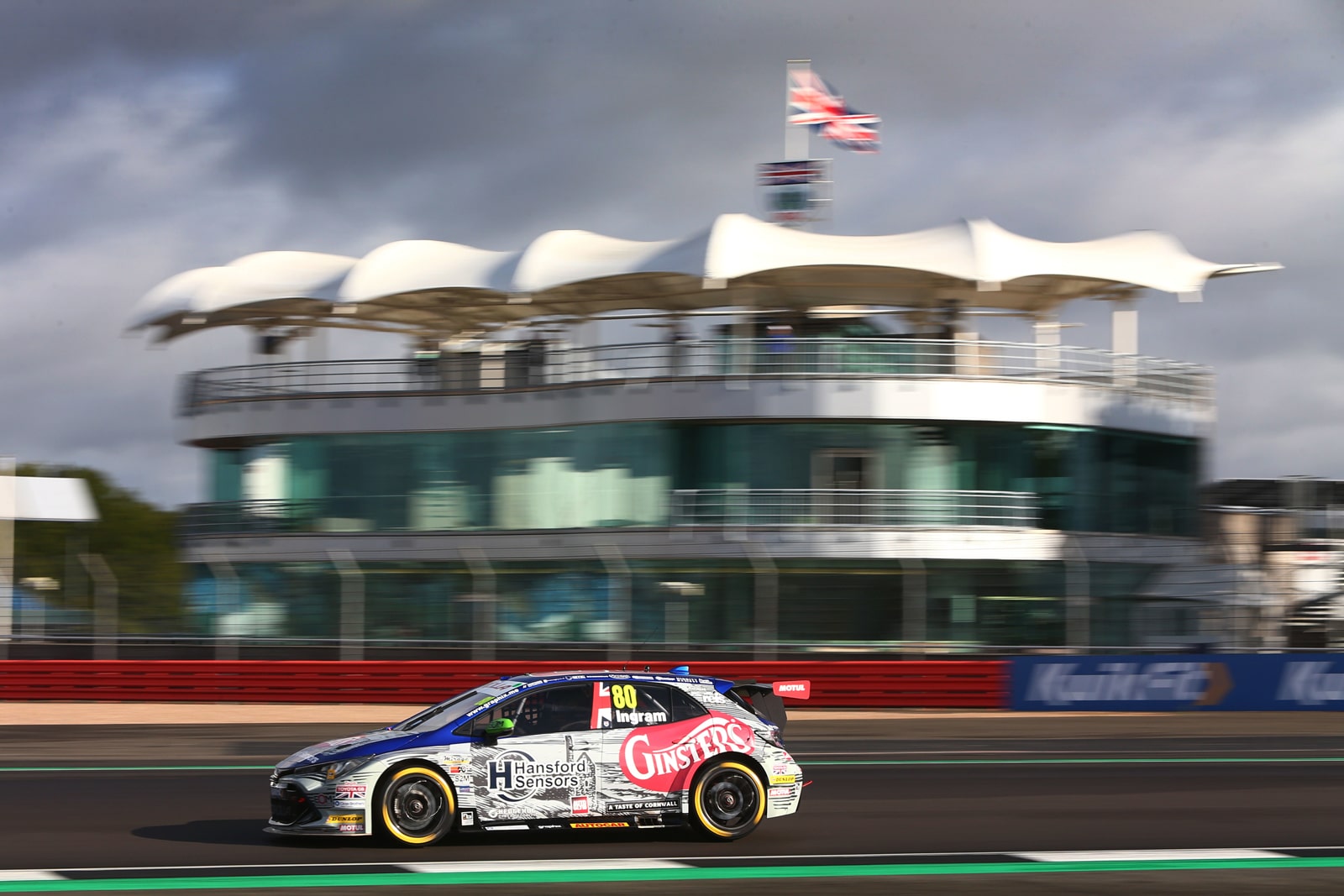 Effortlessly edging clear as the race progressed, Ingram ultimately took the chequered flag more than four seconds ahead of Plato, prompting his pursuer to admit that he simply ‘didn’t have an answer’ to the Team Toyota GB with Ginsters star’s prodigious pace.

With his success ballast increased to the maximum 54kg for race two, the reigning two-time BTCC Independents’ champion knew he faced a tougher task, but he confidently held sway at the front of the field for the first nine laps until a tag from Plato – as spots of rain began to fall – sent him into a wild sideways slide that he did well to control.

The delay allowed Tom Oliphant past into the lead, but as the rain intensified, Ingram refused to let his namesake get away and following a late safety car intervention to recover a car stuck in the gravel, he immediately pounced on cold slick tyres at the re-start to reclaim the top spot. 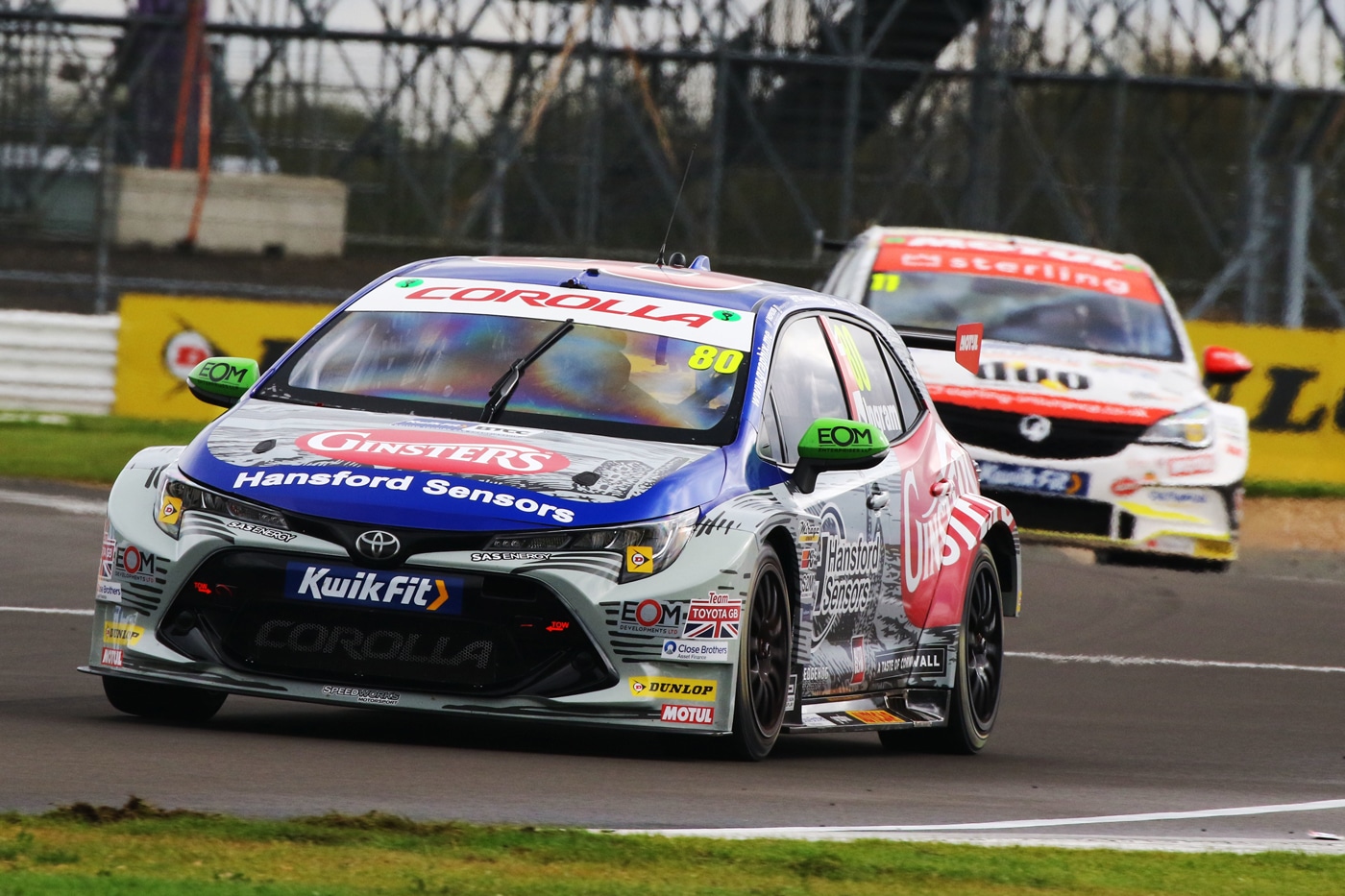 Revelling in the challenge on an increasingly greasy and slippery track surface, he was more than a second ahead when the action was red-flagged on safety grounds with four laps left to run, cementing his 13th BTCC career victory, fifth at Silverstone in the last four years and first touring car ‘double’.

From 11th on the partially-reversed grid for race three and carrying maximum ballast once again, the 26-year-old progressed to seventh on the opening lap before a knock from a rival broke the Corolla’s rear suspension toe link, necessitating a pit-stop for repairs and leaving him two laps down. Thereafter, the Toyota man lapped consistently amongst the fastest drivers on the track in evidence of what might have been.

Despite the non-score, Ingram’s earlier results were enough to elevate him to fifth in the Drivers’ standings in the UK’s premier motor racing series, and for the third consecutive year, he will travel to the Brands Hatch season finale on 12/13 October still in the title fight. Team Toyota GB with Ginsters is locked in a tight three-way tussle for seventh in the Teams’ table, as the single-car Speedworks Motorsport-run squad continues to outperform multi-car adversaries. 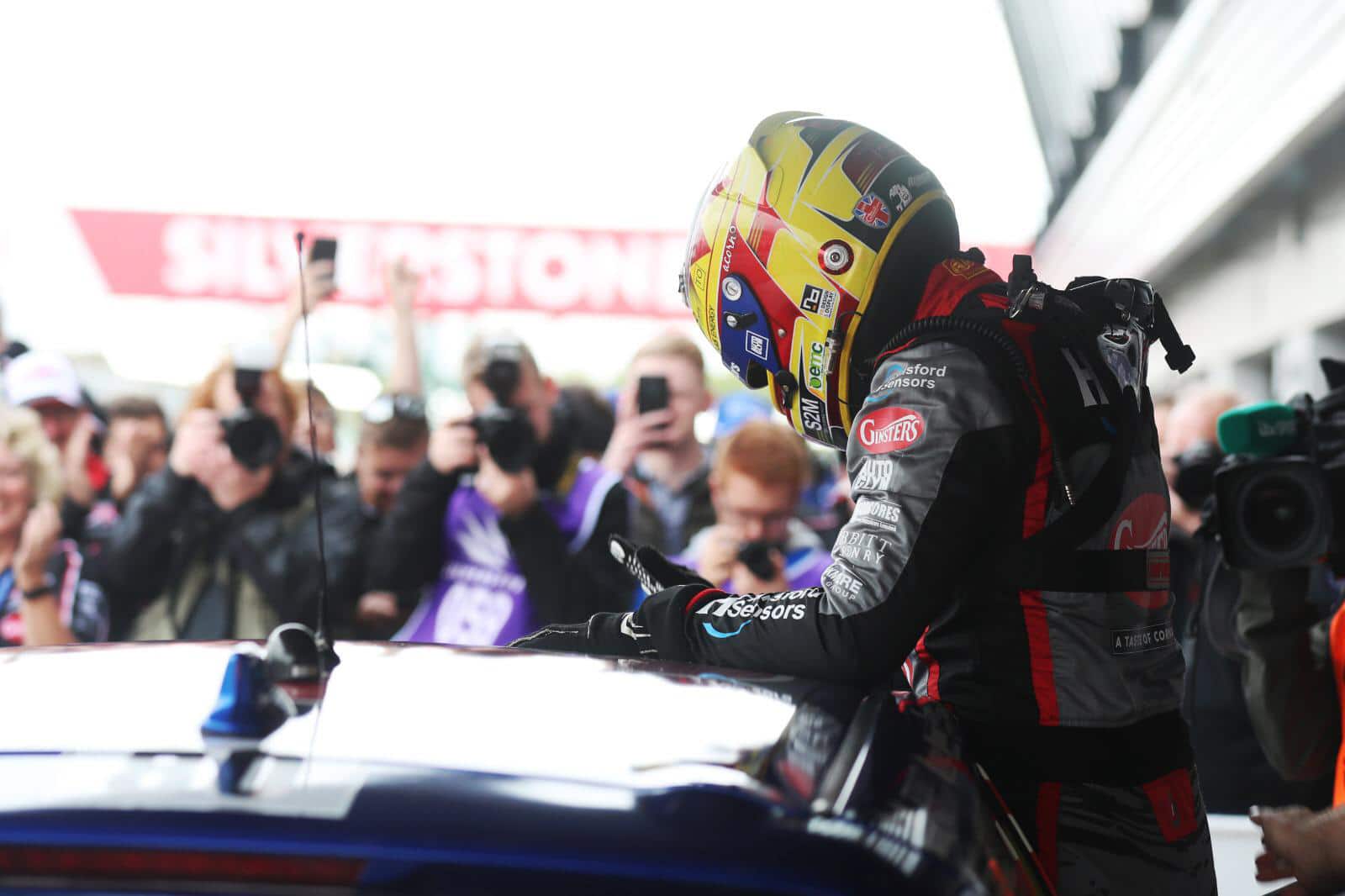 “What more can you ask for? To take two wins in a single day is just a phenomenal achievement by the whole team – a real milestone for Speedworks Motorsport in the BTCC, and a rarity in the modern era – and we’re all absolutely overjoyed. Better still, both wins were earned entirely on merit. I genuinely couldn’t be prouder of the entire crew – everybody here shares that same relentless, tireless dedication to winning. They just never stop pushing, consistently going above and beyond to generate results.

“We always knew Silverstone would be a good track for us, as it has been in the past – albeit with a different car. Race one was a stunning performance and a commanding victory, and even with a sizeable amount of ballast on-board, Tom looked confident and comfortable throughout.

“He then produced another cracking drive in race two, building up a gap before the rain began to fall and doing a remarkable job to catch the slide when Plato tagged him, which really showcased his supreme car control.

“By the time the safety car peeled back into the pit-lane later on, the rain had worsened, yet Tom didn’t put a wheel out of place. A lot of drivers said afterwards that they were glad the race had been stopped early, but Tom was disappointed it didn’t carry on, which I think speaks volumes. For me, it was one of the best performances I’ve ever seen from him.

“There were a variety of different tyre strategies at play in race three, but we were looking good until the contact and I think we would have come away with another decent points haul. As it was, all we could really aim for was fastest lap, and despite running on maximum ballast again, Tom came very close. Now we’re all immensely fired-up to go and sign off the season in style at Brands Hatch!” 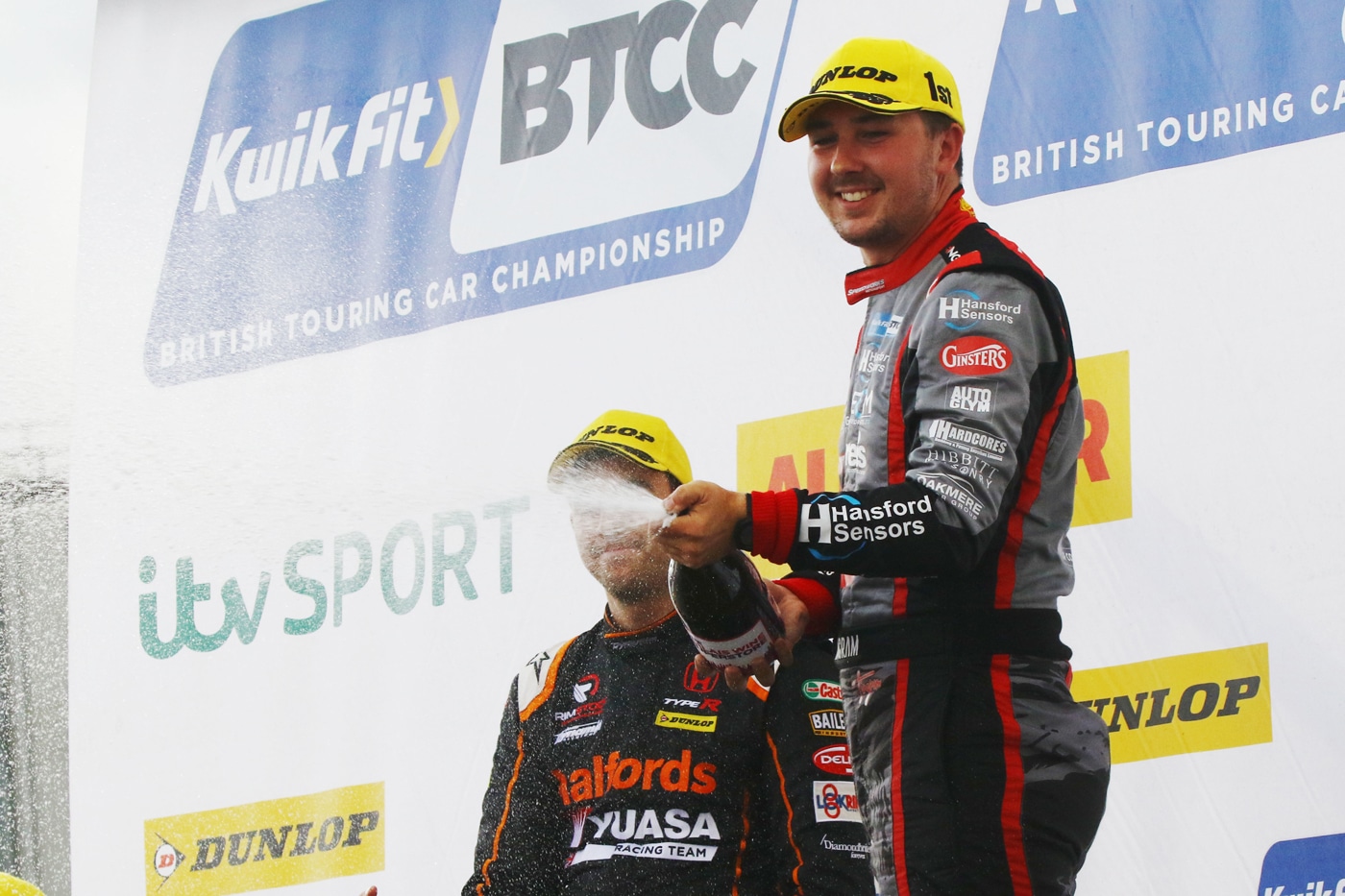 “What a weekend! We were optimistic arriving at Silverstone that we would be on the pace – the Toyota Corolla is just insanely good at these fast circuits – and I was very pleased with the performance of the car throughout free practice and qualifying. I was actually disappointed to miss out on pole position, but the weight definitely played a part in that so we weren’t too concerned and I knew we had a good shot at bringing home some silverware from there.

“We had a lot of quick guys around us on the grid for race one in lighter cars, but I was confident we could hold our own and I love conditions like that – you’ve just got to man up and crack on with it, and I got a fair bit of practice at Croft earlier in the year of running on slick tyres on a greasy track! Jason [Plato] is a wily old fox and I knew he wasn’t going to be beaten easily, so to be able to drive up to the back of him and make a move pretty much straightaway was tremendously satisfying.

“The Corolla felt fantastic – superbly balanced and very strong, as it did all weekend – and after taking the lead, I was able to control it almost at will. It was great to keep our winning run going at Silverstone, and then to repeat the result in the next one – in a totally different kind of race – was just incredible.

“Despite losing the lead when Jason hit me, I could see Oliphant wasn’t getting away. With a lighter car, his only real advantage was straight-line speed whereas we still had the edge through the corners, so I knew it wasn’t over and when he ran wide at the re-start after the safety car, I didn’t need any second invitation!

“It’s so difficult to know how hard to push when you are the first one to explore the conditions, but at the same time it was really enjoyable. It was a shame it was red-flagged because I was having fun out there and felt in a good place, so I would have been more than happy to keep going.

“Race three was then just carnage right from the start – a bit of a destruction derby with everybody seemingly wanting a piece of everybody else and all fighting over the same bit of tarmac. The team worked their magic to repair the Corolla and get me back out on-track after the damage, and we treated the rest of the race as a test session. The car felt great again – really confidence-inspiring – and while we were never going to get a result from two laps down, that didn’t detract at all from an amazing weekend.

“With a lot of high-profile people from Toyota (GB) in attendance at Silverstone, it was super important for us to perform well – and I think it’s fair to say we managed that. Back-to-back wins is a first for us in the BTCC, and full credit must go to the team for such a massive achievement. What a special day!”