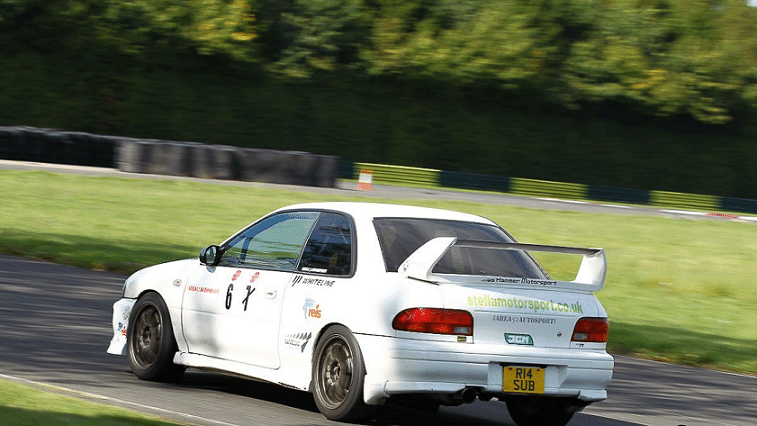 It’s been a busy month for Clive and the team and here we take a look at the past two events. 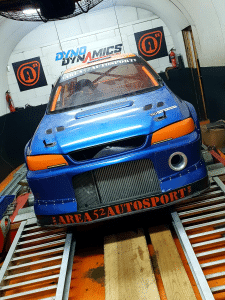 Every year we say we’ll be ready well before the event, however as has become tradition we were on the dyno the day before after an engine refresh! There are no major changes to the car this year apart from the installation of some more aggressive cams. Jase also surprised me with a new ram air effect cone for the Turbo inlet and as it turns out, this in conjunction with the new cams left the car wanting 10% more fuel at high rpm compared to last year. Unfortunately as I’d left the car on old hard road tyres the dyno tuning was trying. Whatever we tried in terms of strapping and tyre pressure meant we had wheel spin throughout every pull, not a major issue but I have no big fancy numbers to band about. 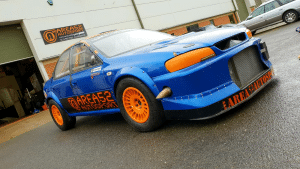 So to the Sunday of TOTB. The weather was against us with heavy rain until 1:30pm and this left very little time for the old airfield to dry and get some runs in. I thought grip would be an issue and as it turned out, I was right. The Drag Shed is set up for a grippy prepared drag strip with very aggressive launch control so I tried an installation run pulling off and wide open throttle in gears 2 to 4 so we could gain a little data. Grip was non-existent in 2nd gear and 3rd it hooked up a little.

We checked the logging and it was time to try a semi launch (see videos here; for the very first time in car also thanks to Jase’s go pro). Our first main run of 2018 resulted in 9.81 at 153 mph on our low boost setting which turned out to be 6th place on the day and my best time. As can be seen on the video, wheel spin throughout 1st and 2nd gear resulted in me having to change gear early. Normally for example we can hold 1st gear past 60mph!

I tried a few more runs but a missed gear here and there meant times didn’t improve. We even tried more power (madness) which exaggerated the lack of grip issue. However I do know now that with grip this latest spec will result in quicker times than 2017. Watch this space……

On 2nd September we attended the 6th round of the Japanese Sprint Series/Subaru Sprint Series at Croft Circuit, Darlington. We are used to challenging days with Sprint Shed and as it turned out we followed form!

After a couple of runs at low boost, the car seemed to be working well with just a few minor niggles that were easily rectified. After lunch, I decided it was time to try full power for the first time this season. I had a cracking launch and the car was quick until half way around the lap when an ecu trip kicked in. We went straight to the pits to investigate and plugged in the laptop to see that the Syvecs ecu had tripped due to running lean. Scary stuff as if it wasn’t for this amazing ecu we could have lost the engine. After phoning and discussing with Jase at Area 52 Autosport, we decided that the fuel pump was the likely issue. Luckily I carry a spare and with very little time to change before the final run of the day we set to work. I just managed to tag on to the queue for the final run of the day.

I was not exactly calm and collected lining up but I had to test if the pump was actually the issue as well as getting a decent lap in.

So I set off but in the back of my mind I was concerned. I gave it all I could and the car ran fine. The lap was untidy and I made two mistakes which lost me time but I came over the finish line with the 4th fastest time of the day. I also managed the quickest 64ft time of 1.45 and also fastest Subaru. I then checked data logs from ecu and all was perfect – phew!

My son Matt had a cracking day in his Mx-5 and finished 3rd in class. A spin on his final lap cost him 2nd but it’s all a learning curve as he’d never driven this track before but a fantastic effort!