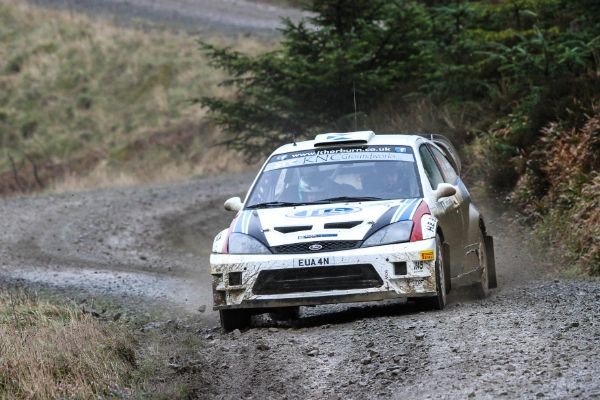 Overnight snow was forecast for the Jedburgh area the night before the rally, and Mother Nature duly delivered with a smattering of snow covering the stages in the early morning.

However as the day progressed the snow quickly melted to slush and then mud, but conditions remained treacherous with heavy rain and strong winds making this a true rally of attrition.

Just like in 2018, the opening stage of the season produced a tie-break as two drivers took joint-fastest times. Pearson and Dale Bowen shared the lead after stage one with SRC newcomers Peter Taylor and Andrew Roughead in their Ford Fiesta WRC.

Incredibly, the two Fiesta crews drew level again on the second test to once again share the rally lead, with Thorburn and double SRC champion Jock Armstrong lurking close behind.

Stages three and four were where it would all change. Thorburn and co-driver Paul Beaton found some irresistible form at the perfect time, as both their main rivals hit trouble.

Taylor was forced to retire with mechanical issues while Pearson spun his R5 and got lodged in a ditch, losing around 50 seconds in the process and with it the rally lead.

Thorburn meanwhile set scratch times on both stages to open up a lead that he wouldn’t relinquish. The local driver took a further stage win on stage five to take the win on his first rally back in the SRC since 2017.

“It’s brilliant,” said Thorburn of the result. “It didn’t look like it after the first few stages, we were a wee bit far away but we knew if the snow disappeared we could have a bit of a push. We had a good stage in three and four and obviously Garry had his problems so after that it was just a case of getting through the last two and taking the win.

“The car is awesome, it’s all just about getting my head back into it after a year out.”

Pearson was happy to take second despite throwing the rally lead away on stage three.

“I think we were quite lucky to finish second to be honest,” Pearson admitted.

“We thought we’d thrown the rally away, thought we would’ve been lucky to make the top 10 so we are delighted to get second back.

“We showed our pace this morning, it was a silly mistake to make [on stage three], but I think it’s encouraging that our pace is there.”

Milne and co-driver Steven Brown enjoyed a fierce battle with Michael Binnie and Claire Mole all-day long. The two Evo drivers were level on time going into the final stage, but the battle swung in Milne’s favour but only by a mere three seconds.

Binnie was left to rue a mistake in stage four that saw a tree pierce co-driver Mole’s window, while Milne was delighted with his result on his first rally in the car.

“We made a lot of set-up changes [from the Malcolm Wilson Rally last week] which seem to be working and happy to be ahead of Michael [Binnie] who’s pretty quick in the Evo’s.

“I think because we’ve got third now we might roll out the WRC Subaru on the next one!”

After mixing it with the leaders in the morning, Armstrong and co-driver Cameron Fair kept a strong pace in their Subaru Impreza as they battled to hold off Pearson and Bowen. However a two minute penalty incurred for checking into a time control early dropped them to fifth.

Scott MacBeth and Daniel Forsyth put on a superb showing as they battled Thomas Gray and Harry Marchbank. Both drivers were driving newly-acquired Evo IX’s and remained close all day, but it would be MacBeth that came out on top, coming home sixth by just six seconds.

Eighth went to Alan Dickson and Martin Forrest in another Evo IX, with IanBainbridge taking ninth on his first SRC event together with Mark Fisher in his Subaru Impreza.

MacDonald and McCulloch both put their Fiestas off on stage three while Wink slid off the road in his Hyundai i20 in the previous stage.

Bruce McCombie and Michael Coutts’ first SRC rally in a Ford Focus WRC was over almost before it had begun, with a wheel dislodging itself at the end of stage one.

The Scottish 2WD Championship saw an intense battle for honours between two Ford Escorts.
Paddy Munro was super impressive on the 2018 Snowman Rally in treacherous conditions, and he was at it again on the Border Counties this year with Keir Beaton alongside.

The pair edged out the more-powerful example of Iain Wilson and Chris Williams by two seconds to score maximum 2WD points, with Steven and Mary Wood grabbing third in their Ford Fiesta RWD.

The Albyn Garage Ltd SRC Challengers saw a continuation of the battle for sixth overall in the main event. MacBeth and Forsyth took the win ahead of Gray and Marchbank, with Dickson creeping into third after a two minute penalty for Bainbridge.

Defending Juniors champion Niall Cowan Jr topped the category on the Border Counties in his MG ZR with Thomas Bruce alongside.

Alex Pirie and Frazer Skene were victorious in the Used Car Parts Subaru Cup on their first outing in the car.

Up next for theSRC is the McDonald & Munro Speyside Stages on Saturday 20th April.