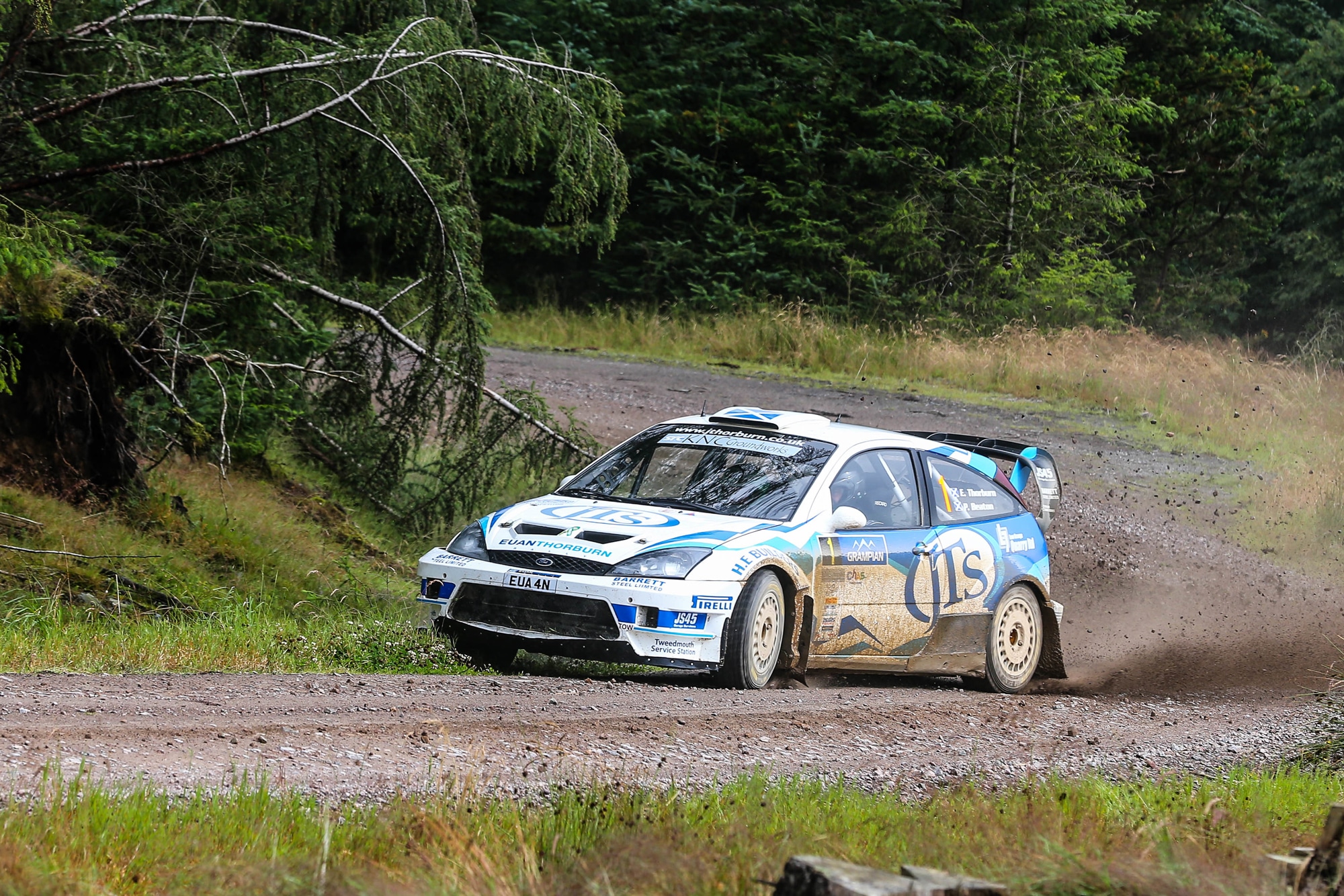 Euan Thorburn and Paul Beaton powered to their third KNC Groundworks Scottish Rally Championship (SRC) title with victory on the Grampian Forest Rally (Saturday 10th August), backing up their successes in 2014 and ’17.

Jock Armstrong and Kirsty Riddick were second in their Subaru Impreza, ahead of John Wink and Neil Shanks who took their first podium together in their Hyundai i20 R5 after a day-long battle with Bruce McCombie and Michael Coutts, which ended when McCombie rolled his Ford Focus WRC on the final Finglennie test.

Torrential rain and gusty winds threatened to plague the fifth round of the SRC, but in the end the only storm brewing was the fierce battle out on the special stages in the Kincardineshire forest..

Thorburn and Beaton headed into the event with three wins from four starts under their belts, but it was Armstrong and stand-in co-driver Riddick that set the pace on the opening two tests in their Subaru Impreza.

The pair had opened up an impressive 11 second lead over their rivals, but that gap was overturned in the proceeding 10 miles of Drumtochty as Thorburn put the hammer down.

The Duns driver powered his Ford Focus WRC05 to a 14 second stage victory to lead Armstrong by three seconds heading into service.

Despite driving with a championship in mind, Thorburn continued his pace into the afternoon and went on to scoop his third Scottish title.

The fact he also won the rally by 27 seconds, his fourth SRC win and ninth across the 2019 season, just made the victory that bit sweeter.

“At the start of the year our aim was to win the championship but we didn’t think we’d get it with so many wins and a round to spare, so this is fantastic,” Thorburn beamed.

“Obviously the first championship is always special but to get three is a great achievement. After sitting out last year we hoped we’d challenge towards the end of the year, but we got off to a good start and it just snowballed from there so we couldn’t have asked for more.

“Everybody has played their part. Paul [Beaton] has done a brilliant job on the notes, Paul Benn has done an amazing job looking after the car it’s been reliable all year, it’s a real team effort.

“It was a funny situation today because we only had to finish in the top 10, but once the stages dried out a bit we got our finger out and managed to take the win.” 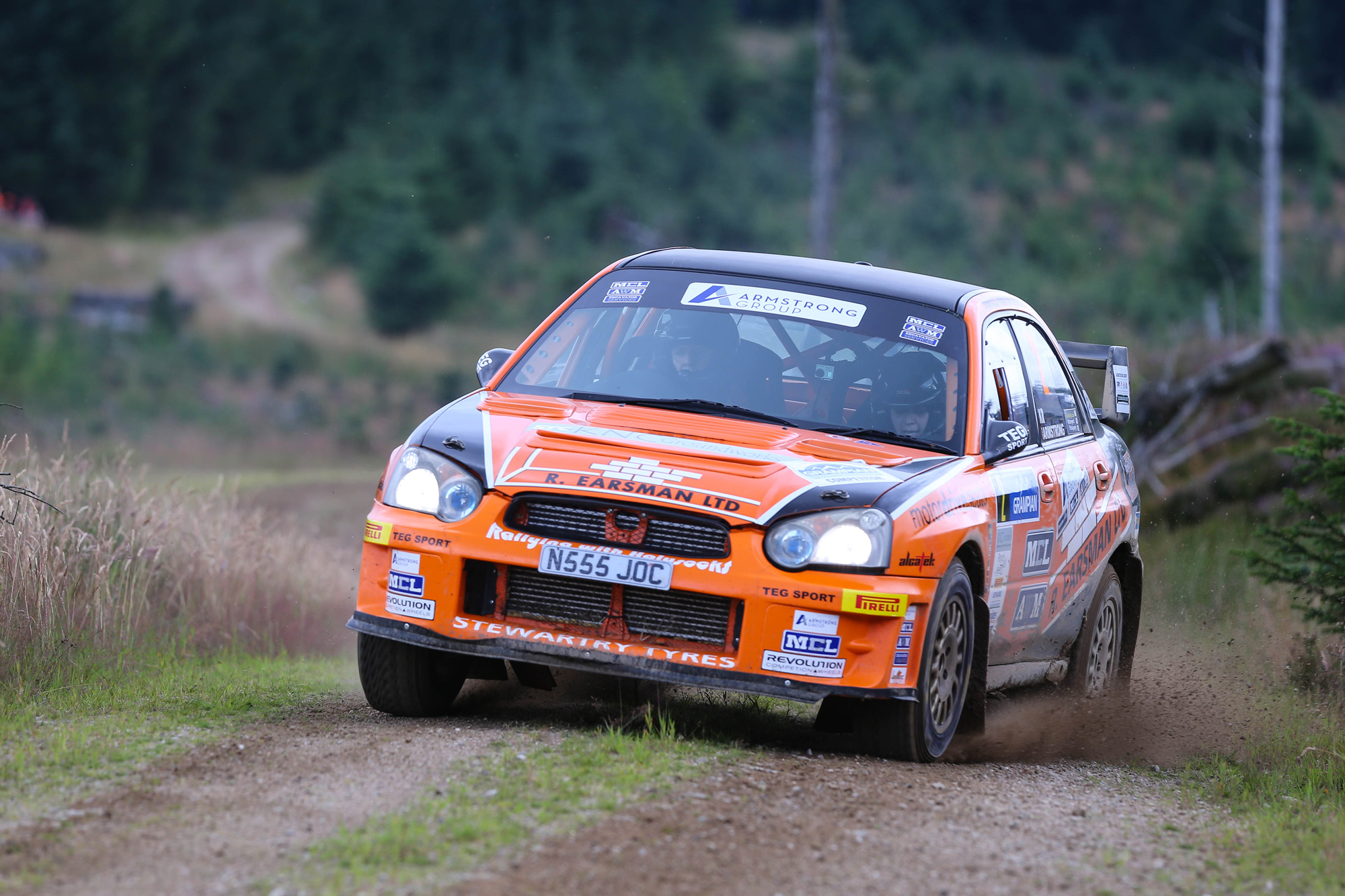 Armstrong was philosophical in second place, but was nonetheless delighted to have kept newly-crowned champion Thorburn honest on his first event since May’s RSAC Scottish Rally.

“It was a good run today, nice to be able to challenge Euan [Thorburn] this morning, and Kirsty did a great job standing in for Cammy [Fair],” Armstrong said.

“There are some fantastic stages up here, they’re some of the best to rally on anywhere, and it’s so easy on the car as well so we thoroughly enjoyed it.”

Wink and Shanks were similarly delighted to have grabbed a podium finish after a trying Argyll Rally in June.

The pair’s battle with McCombie and Coutts had been fierce, with just four seconds separating them heading into the final stage.

Both drivers pushed to the maximum with a spin delaying Wink, but ultimately McCombie paid the bigger price after rolling out of the event. 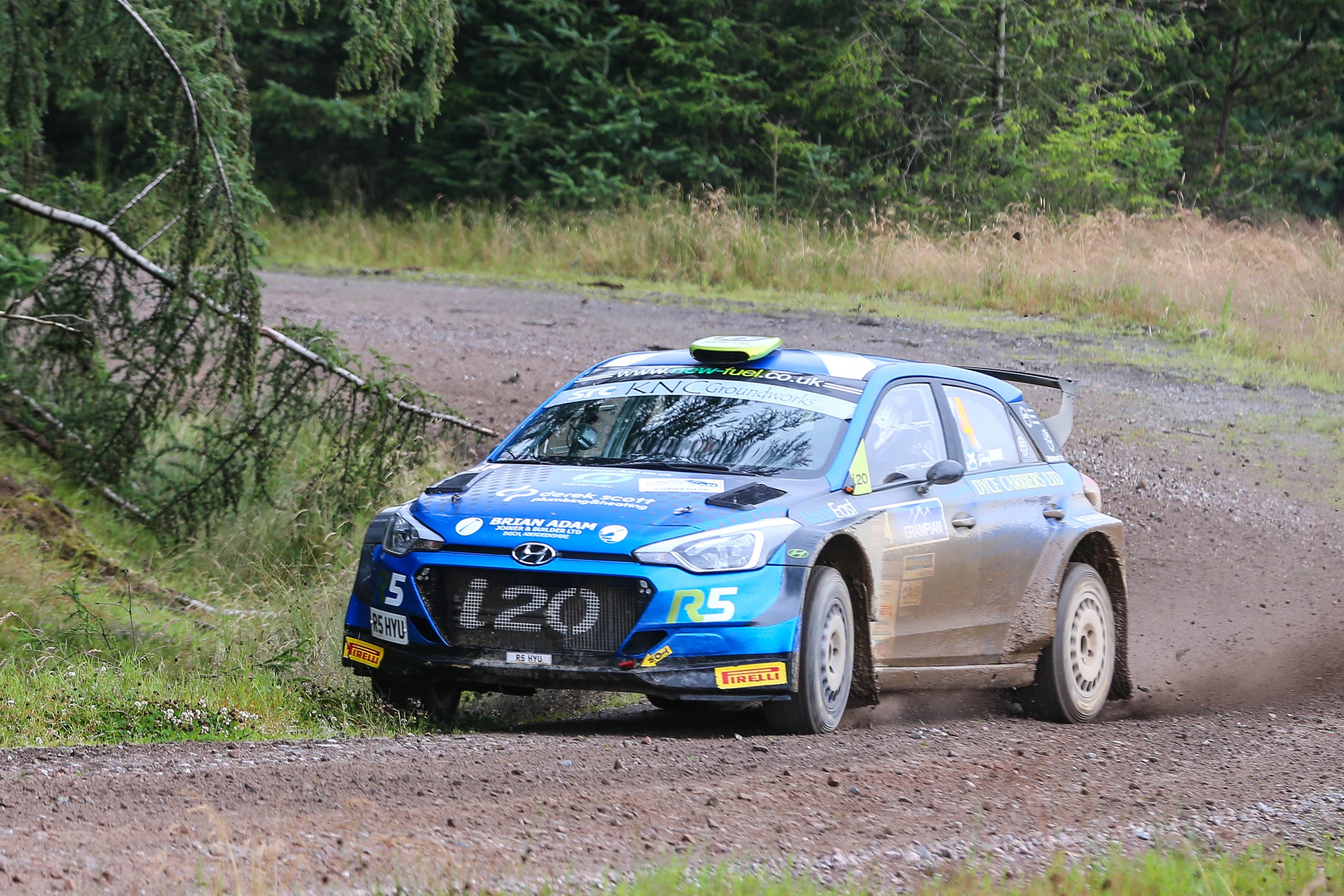 “It was a great battle with Bruce [McCombie] and all the others all day, we were pushing very hard,” Wink reflected.

“Bruce was probably quicker than us all day so it’s a shame to see him go, but that’s what happens when you’ve got two guys both fighting so hard for a podium place.

“It’s a dream come true to get a podium on the Grampian in front of all our friends and our business supporters. It was a challenging event but that’s what makes a rally so enjoyable.”

Michael Binnie and Claire Mole strengthened their grip on second place in the championship with fourth overall in their Mitsubishi Evo IX. Scott Beattie and Peredur Wyn Davies were fifth in an ex-Freddie Milne Mitsubishi Evo VII. 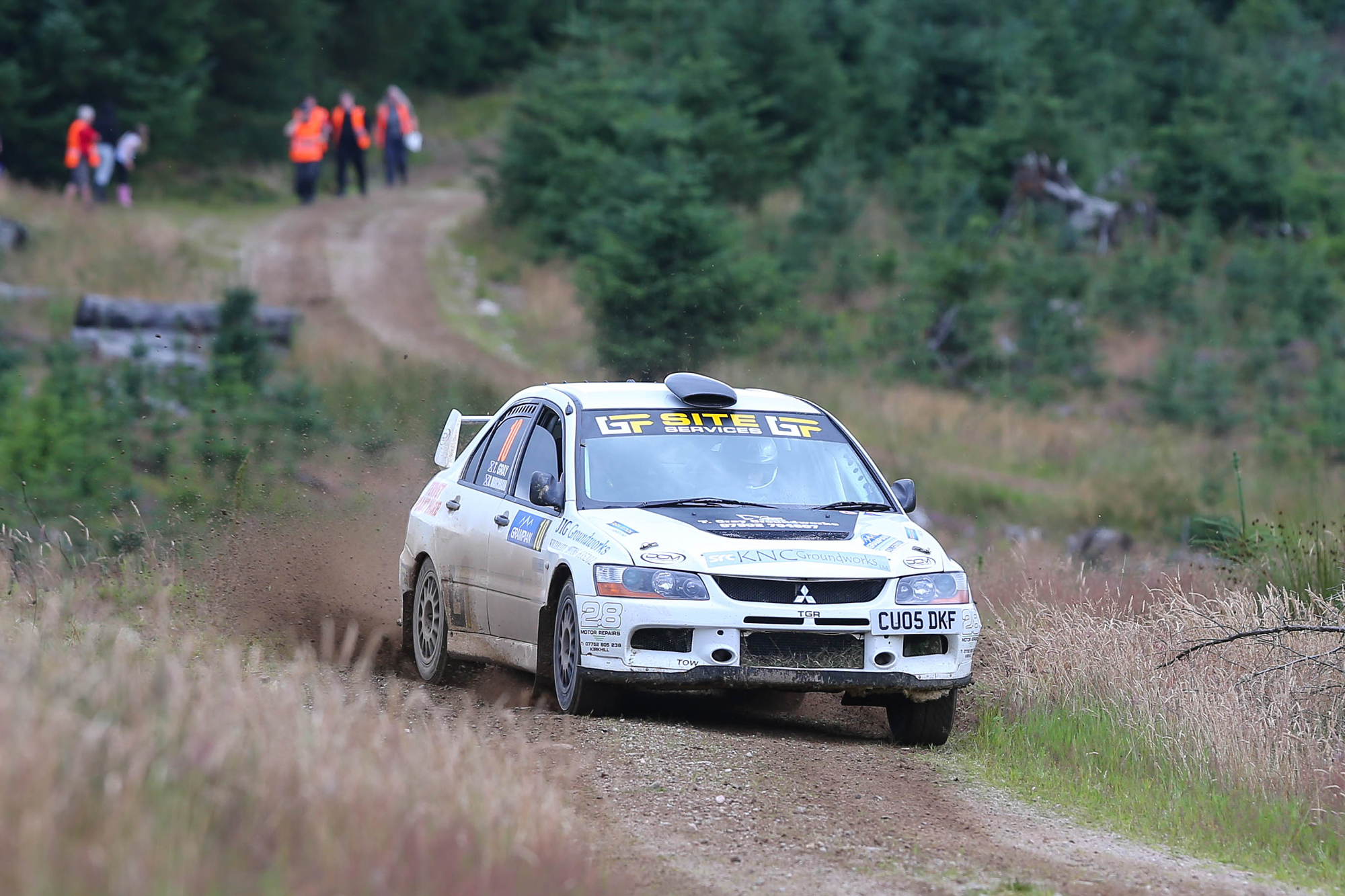 Image: Eddie Kelly: Gray stormed to his third Challengers win of the year

Thomas Gray and Harry Marchbank battled through to sixth overall on the event in their Mitsubishi Evo IX, scooping up the Albyn Garage SRC Challengers win in the process.

The result marked their third category victory of the season, putting them in a very strong championship position heading to the Armstrong Galloway Hills Rally next month.

“We suffered a puncture first thing this morning which hampered our progress a bit, but we got over that and carried on and everything else went to plan,” Gray said.

Keith Morris and Terry Mallin lost time in the morning with an issue at the front-right of their Evo IX, but recovered brilliantly to seal second, 15 seconds ahead of Ian Baumgart and Sinclair Young. 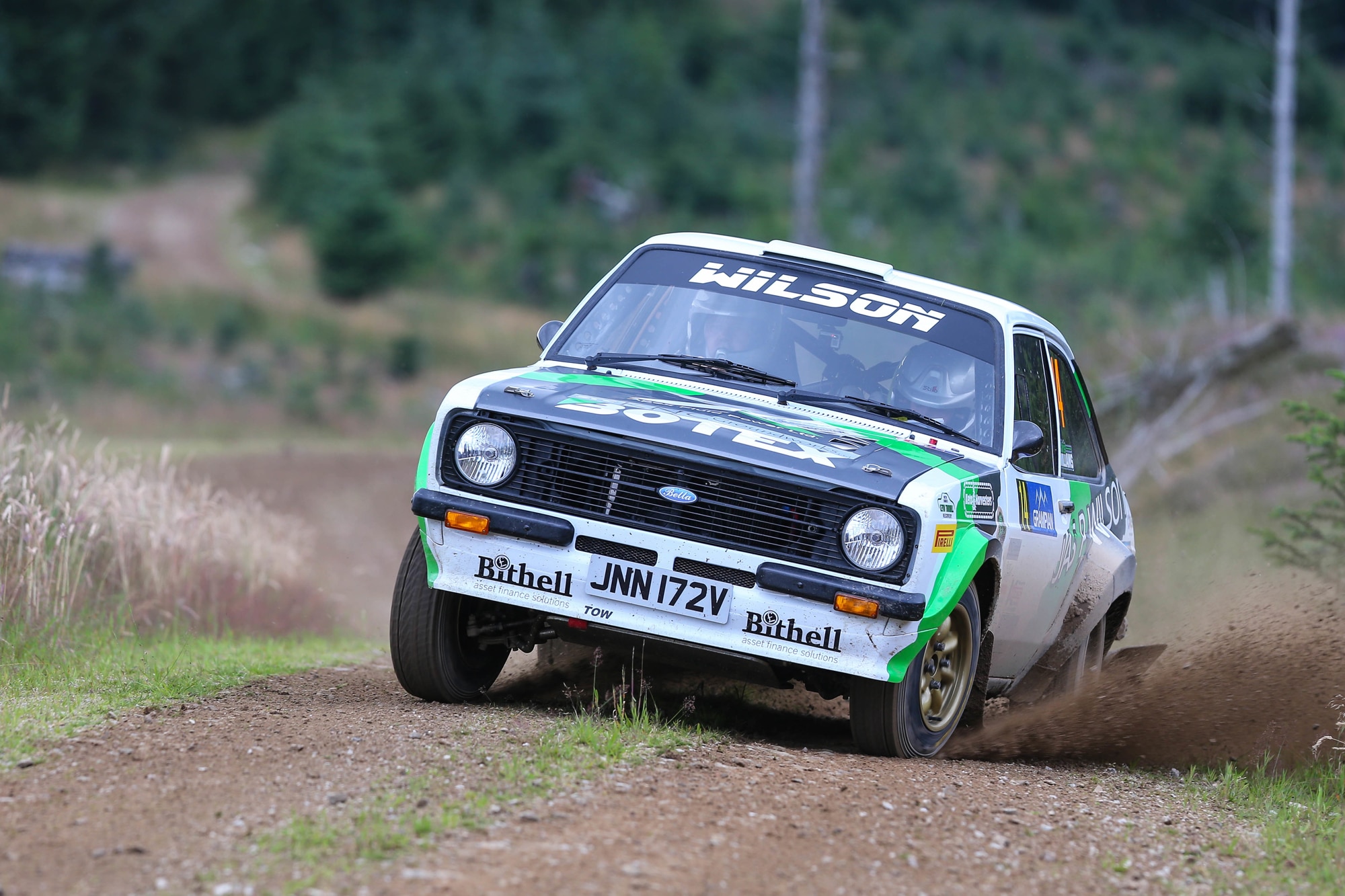 Image: Eddie Kelly: Wilson is now in the box seat to claim the 2WD Championship next month

Iain Wilson and Chris Williams were made to work hard for it, but the pair grabbed their third straight Scottish 2WD Championship win on the Grampian in their Ford Escort Mk2.

Wilson had initially dropped back when he punctured on stage two, but when McCulloch retired on the penultimate stage with a broken halfshaft, he took maximum advantage and powered to 10th overall and the category win.

“It was a really great day. We had a bit of trouble with a puncture this morning but we didn’t lose too much time,” Wilson said.

“I don’t think we’d have caught Mark [McCulloch] today so I feel for him but these things happen. Next is my local event so we’ve got to try and keep doing what we’re doing and try to sew up the championship.”

Second went to MacDonald and Ross after a typically flat-out performance from the duo. Paul McErlean and Niall McKenna struggled with a misfire on the opening loop of stages, but once fixed they put the hammer down and sealed third, just 13 seconds shy of MacDonald and Ross.

Jude MacDonald took an important Junior win with Michael Cruikshank in their Skoda Fabia R2 as they are now odds on to claim the title next month.

Linzi Henderson took second and sealed the Ladies championship in the process. Max and Calum Redpath were also crowned champions, as they took a fine Used Car Parts Subaru Cup win that secured them the Subaru Cup title.

The next round is the Armstrong Galloway Hills Rally, Dalbeattie on Saturday 14th September. 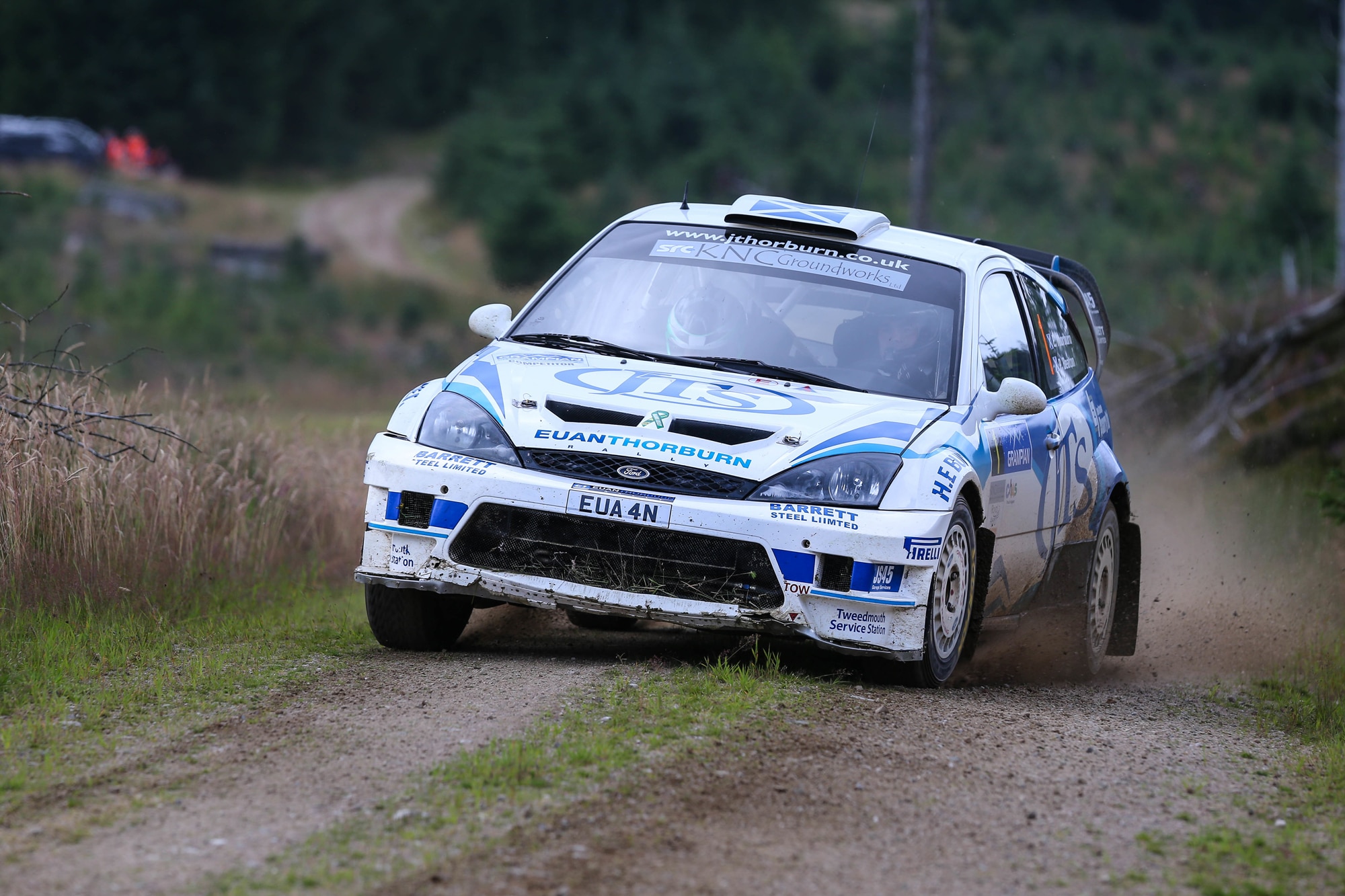 Image: Eddie Kelly: Thorburn has won four rallies this season and finished second on the other